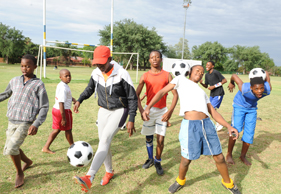 The Sports Heroes Walk Against AIDS is a campaign that has not only raised millions of Rands for the fight against AIDS, but has also improved awareness about the illness. This month sees the last leg of the Sports Heroes Walk Against AIDS as this year’s sporting heroes are geared up to walk almost 700km in and around Gauteng. All thanks to a host of sporting legends who are getting involved in the fight against HIV/AIDS. – BY CATHARINA ROBBERTZE

The Sports Heroes Walk Against AIDS is a vehicle that allows the sporting community, federations, administrators, clubs and individuals to unite in the fight against the spread of HIV/AIDS. “The project is about sporting people uniting and getting involved in the fight against HIV/AIDS,” says Cynthia Tshaka, a director of the campaign and well-known SABC sports presenter. “Over the past eight years we have raised more than R6 million and taught countless people about the consequences and prevention of Aids. We are attempting to remove the stigma associated with this illness.”

The campaign kicked off in 2002 when various sporting heroes walked from Johannesburg to Cape Town and each year thereafter they walked to a different province. The last leg in Gauteng will see them zig-zagging across the province, starting at Wintersveld and ending at Alexandra.

HIV/AIDS IN SPORT
Youngsters who are supposed to be winning medals at the next Olympic Games and World Cup tournaments are most affected, says Cynthia. “Who will play in our soccer, rugby and cricket teams 10 years from now? Who will bring home medals in big competitions in 15 years from now? And who will be in charge of our sport administration in 10 years’ time? It is the youth of today. We need to start doing the work now, so that those who are not infected will be able to lead productive lives. Each one of us needs to stand up and be counted in the fight of our lifetime.”

ONE STEP AT A TIME
Setting off on 19 November, the team will walk for 12 days, taking turns to walk between 5km and 25km at a time. The event will end on 1 December: World Aids Day. The towns they will visit include Winterveld, Hammanskraal, Cullinan, Bronkhorstspruit, Thembisa, Muldersdrift, Kagiso, Khutsong, Orange Farm, Sharpeville, Duduza, Daveyton, Katlehong and Alexandra. The sports heroes will stop at HIV/Aids hospices in these towns, where they will be donating funds and sporting equipment as well as conducting sports clinics. Then at night they will be visiting community halls were they will be speaking to the community about AIDS. A mobile testing clinic will also available at every town and members of the community will be encouraged to get tested.

“We want people to know what they need to do if they have contracted the virus, where to go when diagnosed and what kind of treatments are available. This can only be done through information and more information!”

HOW CAN I HELP?
If you would like to donate money or sporting equipment to the Sport Heroes Walk Against AIDS, contact Cynthia on 083 260 3336. If you want to support the walkers and even join in one their walks, make sure you listen to Talk Radio 702, Metro FM or Umhlobo Wenene FM for regular updates on the heroes’ whereabouts.