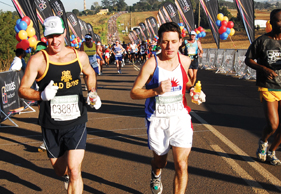 We’ve all heard people say: ‘I could write a book on my Comrades experience,’ but Olly Maujean from KwaZulu-Natal never thought he would end up doing so. As a novice Comrades runner, he set out to keep a journal intended as a memoir when sitting in a rocking chair one day! But the journal took on a life of its own. Soon it was photocopied for Comrades mates to read, and eventually it turned into a 146-page book! A Long Walk to Running is one of the most hilarious reads on running you will find. It is a must-have for any runner who has ever run Comrades, and more importantly, any novice who is brave enough to attempt it! – BY MICHELLE PIETERS

His book is a little too thin to act as a doorstop but should prove rather useful to level out the leg of a wonky table, chuckles Olly Maujean. With this comment one quickly realises it is Olly’s quirky sense of humour about life and especially running that makes his book such an awesome read. It’s about Olly’s 10-month journey from the couch to Comrades, from being a non-existent novice runner in the extreme, to a pretend runner, to a Comrades marathoner!

Olly’s friend and well-loved Regents Harriers runner Bernie Karam writes in the foreword: “Olly has achieved what many runners only think and dream about; a collection of the daily anecdotes, incidents and characters that runners encounter and experience on their Comrades journey.”

The book’s primary focus is on the Comrades journey itself leading up to that one epic day. Olly describes the journey as an emotional and physical rollercoaster ride that gives birth to the Comrades 9-10 months down the line.

FROM ZERO TO HERO
Olly’s sport of choice has always been tennis, except for a few years when golf took priority. “The extent of my Comrades participation up to 2010 was largely limited to lying comfortably on the sofa and watching thousands of deranged people running absurd distances. So as I scoffed packets of chips washed down by fermented-barley-and-hops-flavoured water, I would watch some of the critical moments of the race.”

He describes Comrades as being as South African as biltong, the Springboks, Orlando Pirates and Kaizer Chiefs. “It’s simply part of being South African. But I had never, ever caught the malarial bug of running. I had long ago figured that one could actually drive between Pietermaritzburg and Durban!”

THE DEFINING MOMENT
Olly still battles to pinpoint the exact moment his ‘running career’ started. He believes it was rather a whole bunch of factors that all ‘conspired’ against him to make him start running. But if he has to name some determining factors it has to be his “nutter-sister-in-law” as well as his approaching 40 years of age!

“Though my sister-in-law had never actually run the race up to 2010, she would set her alarm every year to watch from start to finish! She has always vowed to run the Comrades and so, knowing her innate aversion to exercise, I thought it quite safe for me to make a similar vow along the lines of; ‘If you ever run the Comrades, then I promise to run it with you!’ I then proceeded to howl with laughter and may have cracked a rib in the process, knowing with crystal clear clarity that such an event would never actually materialise. Who would have thought we would end up entering Comrades 2010 together?”

Another determining factor was, quite simply, a midlife crisis. “Some men would trade in their wives for a younger model and zoot around in some flashy sports care with their toupees blowing in the wind. For me, I chose to run 90km instead. With my wife, Claire.”

In August last year, Olly bought his first pair of running shoes and an hour or so later, he and his runner wife were off to test his new shoes. Needless to say Claire kicked dust in Olly’s eyes! Bernie writes in his foreword that when he saw that first run, Claire was confidently striding, but his first thought as he saw Olly was: “Poor man, the running genes have skipped a generation!”

Olly describes his first jog as ‘fateful.’ “From that fateful first jog, after which it took days and days of therapy to restore me back to full health mentally, spiritually and physically, I proceeded to do a few solo, stress-free, at my own pace, run/walks. I was not quite brave enough to rejoin my wife just yet. But the running bug was beginning to nip, much to my astonishment.”

BECOMING A REAL RUNNER
Olly soon found himself surrounded by people chatting about all things Comrades. “Most of our group were Catholics. So with the 2010 edition of Comrades falling on a Sunday, we had made the suggestion to our parish priest that he should station himself at the halfway point, brandishing incense and armed with vials of holy water and sponges dipped in the oil of infirmarium. Being surrounded by the youth choir would also have been a nice touch. Furthermore, we requested that he arrange for a tent to be set up at the Kingsmead finish where Mass could be celebrated while we lay around having our aching, cramping limbs massaged. All splendid ideas, but they never quite came to fruition,” chuckles Olly.

He soon surprised everyone on his Comrades journey. His mates at Regent Harries became aware of his natural abilities, reinforced by his commitment to running, strength of character, modest nature, and of course the best sense of humour in the whole of KZN! “Olly had a commitment that was unusual in a novice, and that spoke volumes about who he is,” writes Stephen Light, a fellow Regents Harriers runner. When you mix his quiet wit with his commitment to his running journey, what would the result be? I believe a story worth reading, and that is what his book delivers. This story is about a journey of a novice who becomes a real runner.”

REGENTS INSPIRATION
Olly refers to himself as a ‘rookie’ member of Athletics North and one of hundreds who tag onto the local Durban running phenomenon known as Regent Harriers, for his Comrades training. “After the likes of past Comrades champions Dmitri Grishine, Vladimir Kotov and Leonid Shvetsov turned down my request to be their training partner, with some choice guttural-sounding words, I was told that there was this group of people who gather at some unearthly hour during the week for 10km runs. They weren’t a registered running club, but went by the name of Regent Harriers.”

Olly describes his first run with the group as an adventure, though he felt a ‘teensy’ bit apprehensive. “I looked at these sculpted athletes around me and did my best to impersonate a runner, trying in vain to touch my toes and almost tearing a hamstring in the process.” Olly made the fatal mistake of trying too hard to look like a ‘supreme runner’ and landed up with what must have been past Comrades gold and silver medallists. After the run he “crawled” back to his car, spent about an hour in the shower and sat in his office all day, unable to walk and staring blankly at his computer screen, but he stuck to the programme. “The runs with them forced me to see more sunrises in a 10-month period than I have during the previous 40 years. They are a great bunch!”

Over the months the kilometres were steadily being banked week by week. Soon Olly did his first 21km training run. “In my opinion I had graduated from the Primary School for Runners and was entering into the realm of High School runners. The Comrades dream was still alive and well” His first qualifying marathon was the Postnet Pietermaritzburg 42, which Olly finished in an awesome time of 3:28:13! Apart from running two standard marathons and one half marathon leading up to Comrades, the big C was his fourth race ever!

COCK-A-DOODLE-DOO!
On the big day he was like a racehorse in the starting stalls, ready to bolt! “From having watched the start countless times on my couch, under a duvet and sipping a mug of hot chocolate, here I was actually standing amongst the crazy crowd on the starting line, as a rapidly approaching 40-year-old. Until 10 months ago, running the Comrades would not have featured anywhere on my bucket list. But here I was, amongst thousands of other lunatics, experiencing first-hand the aura and legend that is Comrades, the world’s greatest ultra-marathon.”

Olly entered the stadium 8 hours and 56 minutes after leaving Pietermaritzburg. “A Bill Rowan medal was placed around my neck and it was, without question, the greatest physical achievement of my life. I had experienced the excitement, trepidation, pain, pain and pain of Comrades. Above all, I experienced the euphoria of crossing the finish line.”

A SECOND TIME AROUND
Will he do it again? “Well, they say I’ve only got half a medal now – as well as only half my toenails left – having only done the Down Run, and I would love to have a whole medal – and no toenails. But above all, for me it’s more about embracing and loving the journey to that ultimate destination, to the ultimate human race, the Comrades.