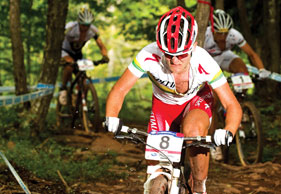 Running plays a leading role in most other sports, including mountain biking, but catching up with jet-setting world-class rider Burry Stander to ask him about his running is challenging. Luckily, he’s good at multi-tasking! – BY SEAN FALCONER

It’s 2pm and time for me to call Burry in Port Shepstone for our interview, but he apologetically tells me he’s running late and still out on a training ride, so can I please call back at 3:30? I duly call again later, but I can hear cars passing in the background and ask if he is driving, and he tells me that he’s actually still on the bike, on his way home, but he’s on a hands-free and happy to talk now. This is a journalistic first for me!

I start by asking Burry to pick his best performance of 2010 and he reels off a whole list to choose from: Second overall with teammate Christoph Sauser in the Cape Epic despite both suffering from a stomach virus, winning a bronze medal in the UCI Marathon World Champs in Germany, and most recently winning another bronze in the UCI Mountain Bike World Champs Cross-Country race in Canada. He also managed third overall in the Giro Del Capo road event, which culminated with his fourth place in the Argus Cycle Tour.

However, Burry says his ultimate favourite remains winning the under-23 category at the 2009 World Champs Cross-Country in Australia. “The two bronze medals this year when I rode in the elite category for the first time are probably a bigger achievement, but in terms of the goals I set for myself, my under-23 title was bigger,” says Burry. “It was my big breakthrough and the culmination of five years’ build-up. I was sixth in 2007, only about two and a half minutes off the winning time, and that put the idea in my mind that I could win it. Then in 2008 I finished second, and in 2009 I went in as favourite – but I still had to pull it off!”

RUNNER TO RIDER
Burry started mountain biking in 1998, aged 11, and says he already had the running fitness and motocross (motorcycle) handling skills to make the new sport a natural fit. “I was pretty active in running at school before getting more into cycling. I did better at longer distances up to 21km because my endurance was good, and my PB for the half is around 1:19, which I ran when I was about 15. I liked running, but it wasn’t dynamic enough for me. I just preferred cycling.”

“But I still run today, up to 10km three times a week, especially in off-season. In cross-country, you sometimes have to dismount and run with the bike, so running fitness is essential. Also, cycling can be biased towards certain muscle groups, so running helps keep me in balance and avoid injury. And I still enjoy running – anybody who is competitive enjoys chasing times, and any improvement I achieve in my cycling is minimal now, so running gives me that feeling of making big improvements.”

LOOKING AHEAD
In 2011, the World Cup events and then World Champs will once again be his priority, but long-term Burry has his sights set on returning to the Olympic Games, having finished 15th in the cross-country race at the Beijing Games in 2008. “Beijing was tough for me. I was still unsure I would be going until a few months before, so I had been focusing on the World Champs, where I got silver in the under-23 category, and I lacked a bit of form in Beijing. But that experience will stand me in good stead next time – and I’m still young enough to think I can get to at least two more Games, perhaps even three. South Africans haven’t done so well at the Games in recent years, so winning an Olympic medal will be incredible, and SASCOC has given me a lot of support to help me achieve that.”

On that note we wrap up the interview. Just then, the noise of cars in the background disappears and I hear a gate being opened. Burry is home.

MARATHON VS CROSS-COUNTRY
Burry’s focus is cross-country, but he also participates in longer marathon races. “Marathons are like the road running of mountain biking – everyone can do them – whereas cross-country is like track athletics – shorter, faster and a lot more technical,” explains Burry. “I do both because they complement each other, and road racing also builds great leg strength.”