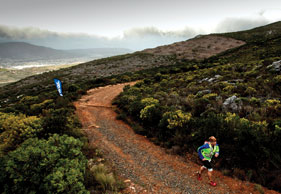 The Hi-Tec Puffer – or Peninsula Ultra Fun Run to give its full title – is known as ‘the Comrades of trail running’, and for a good reason. It tests your body, mind and spirit while showcasing the scenic beauty of the Cape, starting at Cape Point and running along the spine of the Peninsula’s mountains, before finishing approximately 80km later at Ferryman’s Tavern in the Waterfront, and this year saw Russell Mackintosh take up the challenge for the third time.

It’s just before 5:30am. The start is a sea of spandex, headlamps and neon-coloured windbreakers as an icy northwester bites at the 125 runners awaiting the start of the Puffer at the southernmost end of the Cape Point reserve. Jean-Paul Van Belle, the founder of the Puffer and a fellow Fish Hoek AC runner, once told me that the 18 trail junkies who took part in the inaugural event in 1995 didn’t even have permission from the authorities. “We just rocked up and ran,” he said.

Soon we are off and the field immediately stretches out as we make our way along the 13km of road leading to the Cape Point gate. At the first checkpoint I catch up to my wife, Bev, and clubmate, Tommy Ball. Our pace is comfortable, but the predicted stiff headwind is very much in evidence. Just before the checkpoint at Red Hill I feel the nagging hamstring injury that has plagued me recently – it is set to be my companion for the remainder of the day.

The top of Red Hill delivers the first section of jeep and single track before we reach checkpoint five at the crest of Black Hill. The 13 checkpoints serve a dual purpose: runners have to check in to ensure that nobody gets lost, and a smorgasbord of drinks, sweets and savouries are on offer, each station seemingly trying to outdo the previous one with their efforts. Local running clubs man the checkpoints and jealously guard ‘their’ checkpoint from year to year. A case in point are the Pine Nuts from Pinelands, who set up their fabulous ‘Caf? Maclear’ checkpoint at Maclear’s Beacon, the highest point on Table Mountain.

ALL BY MYSELF
I change from road to trail shoes at Ou Kaapse Weg, as the majority of the tar is now behind us. As we start the climb up the Ou Waepad to Silvermine Dam, my companions pull away and I find myself alone for the first time. The wind is whipping across the fynbos, with grey skies above and dark mountains all around – it feels as though I’m running through a scene from Wuthering Heights. My hamstring pain is getting progressively worse, and I focus on getting to Constantia Nek before the eight-hour cut-off. I keep reminding myself that my permanent number is waiting for me at the Waterfront. The Puffer is unique in that entrants choose their own race number, resulting in a host of interesting symbols, words and equations, like ALSORAN, 4U2NV and ∆2005. My own number, LBW 111, is a reference to my cricketing past.

The checkpoint volunteers are the unsung heroes of the Puffer, and the encouragement they give to each runner is phenomenal. At the foot of the FM tower road is a checkpoint manned by Pete and Collette van Eck. To get to this inaccessible point they have to hike over the Vlakkenberg carrying 45kg of supplies, endure a howling wind almost flattening their small dome tent, and yet they are cheerful and encouraging.

Puffer participants run through a landscape that is globally renowned for the rich diversity of its fauna and flora. The race enjoys a close relationship with the Table Mountain National Park, and the field is limited to 125 entrants to avoid damage to the sensitive biosphere. Participants are forbidden from using erosion paths as shortcuts, while littering on the route carries the penalty of disqualification.

CHANGE OF PLANS
The misty summit of Vlakkenberg is followed by a technical descent to Constantia Nek. I’m relieved to make the cut-off with 25 minutes to spare, and happy to find Tommy and Bev are still at the checkpoint, having arrived two minutes ahead of me. Normally runners undergo a backpack check here to ensure they have the necessary warm clothing and equipment for a safe mountain crossing, but a marshal tells us that the race has been re-routed around rather than over Table Mountain, due to the weather. It is only the second time in the Puffer’s history that the ‘escape route’ has been used, and while it eliminates the climb to Maclear’s Beacon and the jarring descent of Platteklip Gorge, it adds 6km to the distance – and it is by no means flat!

The ‘escape route’ starts as a gravel road but eventually narrows to a single track littered with round rocks and occasional sections of boardwalk. A taxing section of steps climbs eternally through a densely-wooded area, and I have to stop and catch my breath regularly, so I soon find myself unhitched again as Tommy and Bev pull away. The frequent river crossings are treacherous and I have a hairy moment when both feet slide off a boulder, but fortunately I land safely on terra firma. At one point I look at the view below and note that I am parallel with Newlands Rugby Stadium. Thirty minutes later I look again… and it appears as though I’m still parallel with the stadium!

ALMOST HOME
Eventually I round the base of Devil’s Peak and the force of the gale almost stops me in my tracks. Despite my fatigue, I manage to run most of Tafelberg Road, before the wicked climb up Platteklip Gorge slows my progress. My loyal seconds, KT, Heather and Mary, are at the Lower Cable Station, offering me support, milk and ‘drugs’.

At the start of Signal Hill the heavens open and I am soaked to the skin in seconds. Halfway up the hill I’m hit by a dizzy spell, but it’s too cold and wet to stay stationary, so I keep moving. The West Coast AC checkpoint comes just in time, as the enthusiastic attendants sit me down and feed me a syrup-filled pancake. Feeling restored, I cover the remaining few kilometres down through Green Point, turn into the Waterfront and cross the finish line after 12 hours and 44 minutes. I’m exhausted and sore, but the journey has been epic. I am elated.