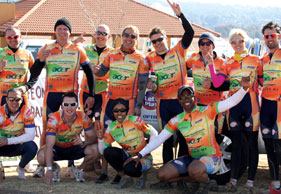 What do you get when you team up an ex-Springbok rugby player, a soapie star, the Idols presenter, a rally car champion, a Fear Factor runner-up and throw in a few business executives, all with a passion for exercise and the drive to give something back to an underprivileged community? You get the 15 Check Challengers. – BY SEAN FALCONER

Over the next few months, a team of ten ‘average Joe’ athletes will be taking on a huge, not-so-average seven-month challenge, to complete 15 of the most difficult sporting challenges around the country, running, cycling or swimming over 2 000km each! Why would they do this, you may ask. Well, it’s to raise funds for the children of the Pennyville community in Soweto.

The goal is to support the Pennyville Cr?che, to provide the children of Pennyville with the facilities, care and nourishment they need to grow up to make something of their lives, with an added objective of the construction and maintenance of sporting facilities for these children.

THE CAUSE CALLED
Pennyville is the first fully-integrated mixed housing development in South Africa, consisting of almost 3 000 RDP houses. Many of the families living here have their own houses for the first time, but sadly, many live below the breadline and cannot afford to pay for the basic, vital care that their children need. It was for this reason that the developer and local corporates decided to build the first of three cr?ches. Once it opened in early 2009, it soon became clear that it was improving the lives of these children, providing a place of safety and fun where the children could get three meals a day and be taught the basics. Even though many families cannot pay the R140 monthly fee per child, the cr?che has never turned a single child away!

Local businessmen Darren Herbst and Alwyn Muller have assisted the cr?che since its opening through their involvement with the Pennyville development, but they wanted to make a bigger difference, and thus the 14 Check Challenge was born in August 2009. “We approached two of our friends with the idea of competing in 14 very tough races in 16 weeks to raise awareness and money for the cr?che,” says Darren. “The Challenge was to prove that everyday businessmen with families and responsibilities can, with a little effort, make a big difference in other people’s lives.”

“There was no time for months of planning and marketing because the cr?che was in dire need, so on 12 September 2009 the first Challenge started and over the 16 weeks that followed, we completed some of the toughest races in South Africa, including the 94.7 Cycle Challenge, OUTsurance Expedition, the BSG Energade Triathlons, the OFM Classic and the Ironman 70.3 Triathlon. At each event we raised awareness for the cr?che and collected pledges. Thousands of people were exposed to the initiative and the Challenge was a resounding success.”

BIGGER AND BETTER; 14 becomes 15
The first 14 Check Challenge turned out to be such an overwhelming success that the team decided to repeat it in 2010-2011, but to make it bigger, better and much harder. They have added a 15th challenge and managed to convince ten high profile celebrities to join them. The events in which the team have been/will be active include:

PLEDGE YOUR SUPPORT
There are many areas in which you can assist the 15 Check Challengers. You can pledge an amount per challenger for every event completed, or make a donation of cash, clothing, food, stationery, books, equipment – or your priceless time with the kids. Go to www.14checkchallenge2010.co.za to download a pledge form or contact Caren Chame at caren@ecclesiate.com or 0861 322 537.

THE CHALLENGERS SAY…
“I competed with the 2009 Challengers in a couple of races and I could see that something special was going on here, so I wanted to be involved.” – Ryno Hartman

“My motivation to do the Challenge derives from the good cause it represents – and the fact that my wife told me my tummy was starting to resemble that of our 15-month-old boy!” – Werner Swanepoel

“The 2009 Challengers inspired me and I’m excited to join them on their quest to change the world… one kilometre at a time.” – Henre Pretorius