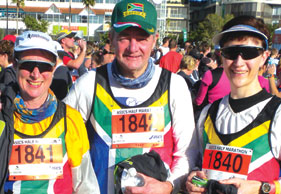 The annual Gold Coast Airport Marathon took place the first weekend in July. The beautiful Gold Coast is situated about an hour’s drive on the Pacific highway south of Brisbane in Australia. It was the 32nd year of the event, which has come a long way since the first run in 1979 when only 691 runners lined up. This year the event was spread over two days and incorporated a 2km/4km/5km and wheelchair half marathon over and above the usual marathon and half marathon. The events attracted more than 23 000 runners and raised thousands of dollars for charity and it was named the best major event last year by Queensland Tourism. Glenn Smitt shared his experience with Modern Athlete.

The pre-race vibe could be felt throughout the expo as I collected my race number and timing chip. Hundreds of people trawled the various stalls offering last minute massages, energy drinks, running apparel and pacing charts. I could be forgiven for thinking that I was at the Comrades Marathon Expo! The trip started as my idea of a decadent, lazy Australian holiday with my significant other, Elzabe. Things changed when Elzabe`s daughter, Elzette, suggested we run the race with her on our visit to their new home in Brisbane. With mother and daughter both being committed runners and me, to a lesser extent, I had no choice but to enter! My only condition was that we run the half marathon.

Getting to the start on race day was no problem. The organisers arranged designated pick-up points by
bus throughout the city every five minutes at no cost. This prevented heavy traffic congestion and might be something the Comrades Marathon Association should consider.

Being a flat, low altitude out and back course, many international elite runners entered in order to run fast enough times to qualify for The Commonwealth and Olympic Games. South Africa’s own Gert Thys features fifth on the all-time top ten list of the marathon with a time of 2:11:55 clocked in 1997.

At the start runners gathered behind their various pace setters, easily visible with each displaying a different coloured set of balloons denoting the envisaged finish time. With the Soccer World Cup being held at the same time that we were running, our trio, (Elzabe, Elzette and myself) felt very patriotic and wore running vests depicting the South African flag. This lead to many comments such as: `You`re a long way from home mate,’ ‘What are you doing here with the Soccer World Cup taking place in South Africa?’ and `We’ve got a surprise waiting for the Springboks in the Tri-Nations at Brisbane, mate.’ This last comment sadly turned out to be very prophetic!

As the race progressed I settled into a comfortable stride about five metres behind my lady pace setter with about 30 other runners. Suddenly, with no warning, she darted off to the portable toilets on the side of the road. The runners hesitated, looked confused, but pressed on. Glancing over my shoulder,
the last I saw of our pace setter was three bright yellow balloons shaking in the wind with their strings disappearing behind the closed toilet door. Our trio kept running and one of the highlights for us was when a band on the side of the road stopped the tune they were playing, and played a few notes of our national anthem as they spotted our South African vests. We made it to the finish and were delighted with our achievement.

All in all it was a well-organised race from start to finish with great crowd support. The best of all was that after the race I could have those extra beers without being frowned upon by the girls!