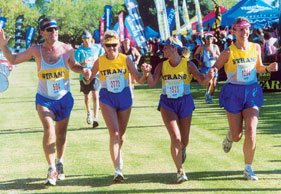 The doctors said that his running fitness probably saved his life by preventing a blocked artery and blood clot from causing a massive stroke – and that he was lucky to survive his first ultra marathon, all because Marius Oosthuizen bumped his head on a roof beam while installing a satellite dish! – BY SEAN FALCONER

It was just another workday for Marius Oosthuizen, a technical consultant from Somerset West with his own business installing home and business audio equipment. 18 March 2002: 12 days before the then 39 year old was due to run his first Two Oceans ultra marathon, he was up in a client’s roof, installing cabling,
but then everything changed. “I was walking forwards, bent over and pulling a cable, when I walked into a low beam. I hit the right side of my head hard, which caused my head to whiplash backwards and I saw stars, but my head cleared again after a few minutes and I continued working,” Marius says, describing the incident.

It may sound harmless enough, perhaps even comical, yet there was nothing funny about what happened next. “That evening I got a really bad headache, but because I had suffered from regular migraines before, I didn’t think much of it. The doctors said that the migraines were diet-related, caused by a tyramine allergy brought on by eating dairy products, bread and also Marmite or Oxo, so I just thought it was the same problem and that it would go away after a few days, as it normally did.”

What Marius didn’t know was that the whiplash had caused a small tear in his right-hand internal carotid artery. The two carotid arteries run up each side of the neck to pump oxygenated blood from the heart to the head, and are a vital part of the circulatory system. The tear had caused a clot to form and block the artery, thus preventing blood from reaching the right side of his brain.

When the headache had not gone away after almost a week and his right eye had become slightly swollen, giving him double vision, Marius decided to phone his doctor, but could only get an appointment after the Easter weekend – and since he still thought it was just an allergy-induced migraine, he continued working. The next day he happened to be working at a radiologist friend’s house, Dr Peter Berndt, who took one look at Marius and told him that his drooping eye was a possible sign of a neurological problem and that he should have it checked out. Marius still thought it was nothing serious – and besides, he had a 56km race to run in a few days.

RACE DAY PRAYERS
Saturday 30 March dawned – Two Oceans race day – and Marius and Susan’s 11th wedding anniversary. Despite his headache, Marius drove to Cape Town with his Strand clubmates to line up for the race. “I didn’t want to miss out on it, so I decided to just run the first few kilometres. When I got to my starting pen, I sat down on the pavement and prayed to God that I could just feel a bit better and be able to run a short distance. When the gun was fired a few minutes later, the headache was suddenly gone, and I just felt better the further I ran. I finished in 5:51:35 and loved every minute of it, despite some leg cramps near the end.”

That evening he went out for supper with his wife for a triple celebration of their anniversary, the imminent birth of their third child – Susan was eight months pregnant at the time – and his first Two Oceans medal. On the way to the restaurant, the headache came back, and it was still there later that week when Marius was due to continue working at Peter Berndt’s house. By now his right eye was swollen shut.

“I called Peter to say I did not feel well enough to work, and he told me to come in for a check-up. Then I was booked in for an MRI scan that Friday, 5 April. When I came out, I found four specialists studying my scans and shaking their heads! I was diagnosed with a dissecting carotid artery with thrombosis, and they said they could not understand how I had not suffered a stroke. When they heard I had just run a 56km ultra-marathon, they told me they couldn’t believe I was still alive!”

BOOKED OFF
The doctors said it would be too dangerous to operate, because the clot could break up or be dislodged and reach the heart or brain, so they booked Marius into hospital to give him blood-thinning treatment to begin dissolving the clot. Susan says that even in that dark hour, there was a lighter side to things.
“We were filling in the paperwork and the hospital staff couldn’t believe it was Marius going in, not me, because he looked so fit and healthy, whereas I was so heavily pregnant! And the day after he went in, when I brought him some more things, everybody kept wishing me luck because they thought I was checking in!”

Marius soon responded to the treatment, and after four days of his scheduled five-day stay, he was ready to go home again. “I asked if I could go home because I already felt better and the 8th of April was Susan’s birthday. The doctors discharged me, but told me that I would have to be booked off all activity for six months. No work, no running, no anything. I was told to just lie still!”

On the 19th of April, Susan was back at the hospital, and this time she was the patient. After a difficult Caesarean birth, she was booked off to recover at home, and Marius says it was quite nice to be able to be there with her and the new baby, to help where he could without straining too much. Fortunately, he was recovering quickly and felt fine again.

Just over two months later, Marius’ eldest daughter celebrated her birthday and invited some friends over for a party. One of the fathers picking up an invited friend after the party was a physician, and the two fathers got talking about Marius’ condition. Marius showed him the MRI scans and the physician simply said, “I can’t believe that somebody who looked like this is still standing in front of me.”

The physician then explained to Marius what had probably saved him: fitness. “He told me that the two carotid arteries feed the two sides of the brain independently, but at the top of the brain there are thin veins which can feed a small amount of blood from side to side. In my case, no blood was coming up to the right side of the brain, but I had enough interconnections for the right side to still get enough blood to prevent permanent damage. He said that my high level of fitness contributed to this greatly, so my running literally saved me.”

TOUGH TIMES
For six months Marius had to go in for weekly blood tests so that the doctors could make sure all the clots had been dissolved and check there was no kidney damage, a possible side-effect of the treatment. Physically, Marius felt fine – he was more worried about his financial health. “I was working for myself, so being booked off for six months meant the family had no income. Fortunately I had insurance, and no debt, so we survived by tightening our belts.”

“I followed the doctors’ orders and sat at home doing nothing for six months, even though I felt fine, and then I eased myself back into work, going out to see clients but not doing physical work yet. I brought in a young apprentice and he is still with me eight years later, and luckily, many of my clients that I had referred to my opposition came back to me. Even today some of them still ask me if I’m okay.”

He also eased himself back into running, and that November he lined up for his first post-treatment race, the Winelands Half Marathon in Stellenbosch. Seven months later he had added another Two Oceans medal and his first Comrades medal to his collection. At the time of the injury he had only just done his first two marathons – today he has about 70 marathons and ultras under his belt, including nine Two Oceans and six Comrades. Next year he will be aiming for his Two Oceans Blue Number.