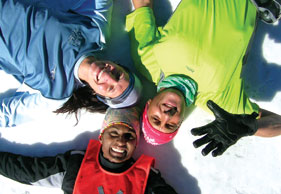 What do you do when a large cold front approaches Gauteng? You run of course! – BY IAIN MORSHEAD

A large cold front was approaching Gauteng and callers to a local radio station were speculating about the possibility of snow. As the traffic around me slowed to a crawl, my mind raced to the mountains. A quick call to a guide on the spot confirmed snow on the summit, but would anyone else be prepared to join me at the last minute for a one-day trip to the Berg?

I knew that I could rely on trail running legend Trevor Toerien from Boksburg Athletic Club and was not disappointed when he eagerly offered to accompany me on my wild whim! Two other members of our club, Salome Brits and Rashika Rampersadh, completed the group. Salome is an experienced trail runner, but it was Rashika’s first off-road experience. While admitting to feeling a bit intimidated, her effervescent disposition covered up any signs of nervousness.

Less than an hour later we were on top of the Berg (over 3 000m above sea level) slipping and sliding on the frozen Tugela River and playing in the snow. A relatively easy 7km had sent our spirits soaring and transformed us into a carefree, childlike state. The view from the top of the Amphitheatre was breathtaking and refreshed the soul like a mouthful of snow. This was similar to the feeling of standing on top of Table Mountain but on a far grander scale and free of man-made structures.

As Rashika discovered, there is no such thing as trail runners and road runners; we are all just runners. The only difference is that some runners have discovered that fitness earned in the suburbs is a free ticket
to compact exhilarating wilderness experiences.