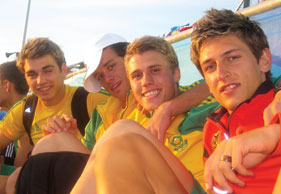 He had a dream to compete in the 2010 Junior World Championships in . That dream recently came true when 17-year-old Werner Pretorius and his South African team mates set off for , to match their skills against their counterparts from all over the world. Werner and his team mates not only experienced international competition at the highest level, but more importantly learnt how a shared passion for sport unites different cultures from all over the world. – BY MICHELLE PIETERS

He had dreamed of the moment forever: walking into the stadium in representing at the 13th IAAF World Junior Championships. And finally on 19 July his dream came true! Werner, a matric pupil from Afrikaans Ho?r Seunskool in and one of the country’s top junior 110m hurdlers, was part of the 18 boys and five girls who made up the South African team. Though they only managed to bring home two medals, they all gained valuable experience in the international arena. “If only everybody got close to their PBs, we would have performed much better as a team. Nevertheless we had such great fun and made so many friends from different countries,” says Werner, who qualified for the World Champs in June.
The qualifying time for the 110m hurdles was 13.90;
Werner ran a PB of 13.87.

The opening ceremony was something Werner will remember forever. Youngsters from all over the world came together at an indoor track next to the stadium where the Games were held before marching into the stadium. “It felt like the Olympics!
I knew some of the athletes from other countries as I competed against some of them last year. We all got along so well.
This year the South Africans became very good friends with athletes from , and .” The South African team stayed on a university campus 50km outside the city.

Unfortunately Werner did not perform at his best as he had broken a small bone in his foot only days before he had to compete. “I was with a friend and I was wearing sandals.
Just as I wanted to get into a car, I slipped and stepped into a ditch! I immediately knew I broke a little bone as the same happened last year while wearing the same shoes!” Werner used painkillers to try and manage the pain and got some physiotherapy, but it still had an influence on his performance. “It was not sore but I could feel that I lacked strength in my foot when competing.” Despite this Werner missed going through to the semi-finals by only 0.1sec!

Werner’s parents as well as his coach, Irma Reyneke (a former 400m and 400m hurdles Springbok) supported Werner at the Games. “Initially when I heard about his foot I thought he was joking! Then I got angry, but we all accepted it and made the best of the situation,” says Irma, who believes Werner has the ability to become a South African record holder. She has been coaching Werner for a little over a year. For her the highlight of the Games was watching the 110m final hurdles event.
“These kids are all so good. There is very little difference between them. The finals were so exciting because the favourites did not win!”

Werner has made many new friends and can’t wait to go and visit them! “We communicate on Facebook and sms each other daily! They are all great and we all got along so well. It was awesome competing, but for me the highlight of the trip was the after party. All the teenagers from all the different countries came together and partied!”

Werner plans to study civil engineering at the of next year and hopes to secure a bursary to further his studies in the . For now he is taking a break from athletics and concentrating on his studies before starting training later in the year for the African Junior Champs next year. And of course he has a new dream, to compete at the Olympics in 2012. “I will have to run a time of at least 13.5sec to qualify. Also, by then I will be a senior and the hurdles will be higher. It will be very hard but nothing is impossible.”