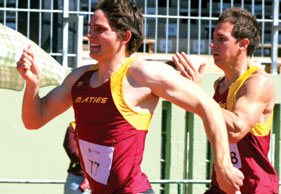 He has two Paralympic gold medals and two world records to his name in the 100m and 200m in the T37 class for athletes with cerebral palsy, but Fanie van der Merwe just wants to get better, and that’s why the 24-year-old is working to improve the one aspect of his sprinting that he feels still lets
him down. – BY SEAN FALCONER

What is the short-term goal you’ve set yourself to improve your performance?
My reaction times to the gun are not that good. The one Chinese guy has an amazing start, and he’s usually two metres ahead of everyone straight from the start, so we have to chase him down.
I’m a good finisher, but I still need to work on my explosive power during this winter off-season.

So you must be doing a lot of hard training at the moment.
Yes, but I’m privileged to be able to train in Stellenbosch, which is a real hub of disabled athletics. I’m part of a squad trained by Suzanne Ferreira that includes Arnu Fourie, Hilton Langenhoven, Ilse Carstens and
Jonathan Ntutu. We’re all international athletes and always train together, often for the same competitions, so it helps keep us all motivated and focused.

The stories behind your world records sound a bit complicated…
At the Beijing 2008 Paralympics, I won gold in the 100 with a PB time of 11.83, when the world record was 11.79. Then at the Nedbank National Championships for the Physically Disabled in Port Elizabeth earlier this year I ran 11.71 for a new world record, but for a long time I had been listed as running 11.66. I actually ran 11.86 in 2008, but it was written down incorrectly and somehow never corrected.

In the 200, my 23.84 in Beijing was a new world record, and then I beat it with a time of 23.19 at the second Fazza International Athletics Competition in Dubai in early 2010, but I wasn’t officially registered with the International Paralympic Committee at the time, so they don’t recognise that time as the world record, even though they recognise it as my PB! A few months after that I broke the record again, at the Champs in PE, but it was ruled wind-assisted and therefore the 23.84 still stood as the record. Luckily I ran 23.72 in the Netherlands and then 23.3 in Spain during a recent overseas tour with other South African Paralympic athletes, so now I have officially beaten the 23.84. It’s always good to break a record, but obviously it’s a bit weird because it’s not my personal best.

So the tour went well?
Yes, most of it. I won the 100 and 200 at the Paralympic World Cup in Manchester, although my times weren’t great. Then we took part in the Dutch Nationals and I won both my races again. It was raining when we ran the 100, but the conditions were perfect for the 200 and I ran the record 23.72. From there we went to Barcelona for the Spanish National Champs, but my 100 was a disaster. Out of the corner of my eye I saw the Canadian next to me false start and expected them to call us back, but it didn’t come and I got left in my blocks. All the other guys went with him, even though most of them said afterwards they also thought it was a false start. That just amped me up even more for the 200m, and I ran 23.3 to break the world record again! After that we went to Germany for two competitions, including the German National Champs, where
I ran good times in the 100.

Fanie van der Merwe is a true modern athlete and an inspiration to all of us. Keep winning golds and breaking records Fanie, Modern Athlete and the whole South African running community is behind you all the way to the finish line.