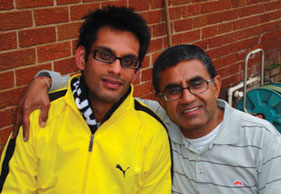 Being overweight was always a part of his young life; in fact, he can’t remember a time when he was not chubby. As a kid he loved food and would eat everything and anything! His chubbiness eventually led to him being extremely overweight and with the extra kilograms came disappointment and sometimes even embarrassment, because he was never able to join his friends playing sport or fulfil his one secret wish… to run!

In spite of his body size Ketan was an avid Comrades supporter as his dad, Natvarlal Mistry, is a Comrades runner. He followed the build-up to the Comrades Marathon and looked forward to race day even more than he looked forward to his birthday! He supported his dad on the route or if he could not make it to race day he was glued to the TV screen. And when it was all over, Ketan would picture himself one day also running the Ultimate Human Race…

THE DAY HIS LIFE CHANGED
Ketan was not active in primary school in Lenasia, south of Johannesburg, but it never really bothered him. When he enrolled at Parktown Boys’ High School things changed. “Suddenly I was in a hard core boys’ school where sport was a priority and a means to bond with your mates. By the time I started high school I weighed about 100kg and it didn’t bother me, but in high school it became an issue. When I went shopping I had to look at clothes in the ‘up size’ section. I could not buy Levi’s jeans because they did not have a size big enough for me,” remembers Ketan, who by the age of 16 weighed in at 110kg and had a 42-inch waist.

In Grade 10 Ketan’s cousin, Kaylash Bhana, approached him. “Bru, this is just not on. You need to lose weight.” Ketan respected his cousin’s opinion and that day he realised for the first time that he had to lose weight before it was too late. Kaylash gave him a book called Body for Life, written by Bill Phillips. “That book changed my life. It was the first book I ever read from start to finish. It took me a week to finish the book. I knew nothing about nutrition and excercise, but the book explained everything clearly.”

STEP BY STEP
It’s not easy to lose weight at any stage of life, and even more so when you are a teenager, but Ketan was determined to do it all on his own. The first thing he did was to cut junk food, sweets and crisps from his diet.

“The meals at home were always quite healthy, but the problem was my portion size. I used to eat about six or seven rotis at once. Then I started halving my portions. I have never told anyone this before, but sometimes I was still very hungry when I got up from the dinner table! I then forced myself to fill up with water. I also told myself that I did not need the extra energy as I was off to bed anyway. I knew if I allowed myself an extra serving of food it would lead to two or three extra servings the next day.”

Initially Ketan did not tell anybody about his weight loss plan. But when his parents became aware of their son’s determination to lose weight, they supported him wholeheartedly. “My mom loves baking! She used to make samoosas at least every second week, but in the nine months it took me to lose weight, she only baked about three times! I told her if you are going to bake, I am not going to have anything. I even refrained from chocolate, something I love. Once someone held a chocolate right in front of my mouth. I refused to have it. In nine months I did not touch one single block of chocolate.”

One day a week Ketan allowed himself to eat whatever he wanted, but even on this off day he would not indulge excessively. “On a Sunday night I would allow myself one samoosa or a handful of crisps. That was it.”

THE FIRST STEPS TO A LIFE OF FITNESS
Ketan convinced his dad to buy an Orbitrek exercise machine. “I woke up at 4:30 in the morning and trained on the Oribtrek. Initially I could not run, but started walking with my dad every other morning. The first couple of times I was huffing and puffing. We used to walk only 20 minutes. I stuck it out because I just wanted to be thin and feel normal.”

Walking with his dad had other advantages too; it became a bonding session between father and son. “We saw many runners while walking and my dad used to encourage me and say soon I would be running too. Though I could never run because of my weight, I always knew running was somehow a part of me.” Walking progressed to running and before Ketan knew it, he was running 3-5km every second day.

His weight slowly started coming down and Ketan felt great! For the first time he could fit into ‘normal’ clothes. He remembers buying his first pair of Levi’s jeans, a size 36. At school he started participating in sport and even played squash. After he lost 20kg he progressed to 7km runs on weekends. “From there my running just took off.”

A NEW ME!
Ketan eventually lost so much weight that his friends did not recognize him. As he was attending school in Parktown, his buddies from Lenasia did not get to see him very often. “I remember going to a function and chatting to a girl. My friend asked her if she knew who she was talking to. She had no clue and could not believe it was me.” There were many other funny moments, like the time Ketan’s pants fell off his hips while he was standing in the school bus. “Though I was wearing a belt, my pants were just so big they did not stay up. Everyone started laughing!”

Within nine months Ketan lost 40kg, weighing in at a healthy 70kg. He kept his weight stable and by the time he started studying accounting at the University of Johannesburg, he was still the same healthy weight.

THE ATHLETE
Ketan and his dad kept training together and Ketan built up to running half marathons. “The first time I felt part of the running community was at my first 10km race in Lenasia.” Ketan has since run several road races, including the Two Oceans Half Marathon last year. His longest race so far has been the Colgate 32km race in Boksburg. Part of his daily training includes an hour yoga combined with breathing exercises.

Today Ketan, now 23, is a dedicated runner with a big dream of running and finishing the Comrades Marathon hand in hand with his dad. By the end of the year he wants to tackle a full marathon. “Running has become part of my life,” he explains. “I can’t imagine my life any other way.”

Ketan’s advice to anyone wanting to lose weight is that the decision to shed those extra kilograms has to come from inside yourself. “You don’t lose weight for anyone else. You do it for yourself. It is all about you.”

He gets his inspiration from the back markers who run Comrades. “The front runners are great, but they run professionally. The runners who inspire me are those ones who have nine to five jobs; the labourers who run to work and back just to get their training done. I have the utmost respect for these people. One day I will be one of them. I will be at the Comrades Marathon. Maybe even next year…”