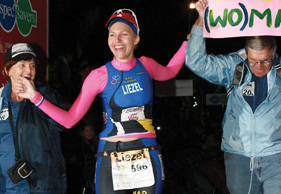 Her goal was to complete Ironman 2010. Halfway through her training she attempted Ironman 70.3 to gauge her fitness and gain experience. Unfortunately she failed to complete it, but Liezel van der Westhuizen dusted herself off and kept training. On 25 April this bubbly DJ and Idols-presenter completed the gruelling Ironman in 16:19:51! Modern Athlete spoke to Liezel about never giving up and always focusing on your goal. – BY MICHELLE PIETERS

You have just conquered Ironman 2010. What an amazing achievement!
You must be very proud.
I’m proud of achieving the biggest goal that I have ever set for myself! It was something that up until three months ago I never thought I would be able do. I know now why the Ironman motto is: ‘Swim 3.8km; Bike 180km; Run 42.2km – Brag for the rest of your life’, because I haven’t stopped talking about my big achievement!

What were the days leading up to the event and the night before the race like?
I was a nervous wreck as I was told by fellow triathletes to not even bother attempting Ironman as I wouldn’t finish. I normally don’t listen to negativity but when you hear the same thing, it does start playing on your mind. I had sleepless nights and kept having nightmares that I would forget my running shoes. When I arrived in PE and saw all the athletes who looked so confident, I felt scared and intimidated. I remember standing in the middle of the expo wanting to cry. Then a very good friend phoned to wish me luck and told me she was praying for me. Suddenly I found a sense of calmness.

How was your experience of the three different disciplines?
The swim was very choppy but I expected that. I remember running into the cold water and thinking, ‘Just get through the swim and don’t think about the bike or the run.’ The water was so cold that my legs started to cramp. At one stage I was just using my arms to swim, not kicking at all. The race organisers announced before that if anyone was seen struggling, they would be pulled out due to the dangerous conditions, so I tried to get rid of the cramps by stretching and not looking as if I was in trouble. I would have been crushed if I hadn’t even finished the swim.

Which part of the race was ‘easiest’ and which was the hardest?
I loved the swim even with the conditions and the cramps. I thought the run would be the hardest because I hadn’t done any long distance races. However I totally enjoyed the run, mainly thanks to the crowd support. I was even teased afterwards that if I hadn’t stopped to chat to spectators, I would’ve finished earlier!

Did you ever feel like giving up?
There wasn’t any point that I felt like giving up. I invested a lot of time training and I knew that I would make it. I also kept seeing the faces of the people who told me I wouldn’t be able to do it.

How did you motivate yourself when things got tough?
I just thought of my setback at Ironman 70.3 and motivated myself to keep going. I had done the training and my mind kept telling me that I would finish. I also kept a positive attitude and thought about how much fun I was having.

How did it feel crossing the finish line?
My partner, Dean Stockenstrom, who finished Ironman in 12 hours, ran the last 10km with me. I vaguely remember meeting my parents and they walked down the red carpet with me.

It was surreal. I couldn’t believe I was completing Ironman. I remember Paul Kaye (the MC) saying, “Liezel, you are an Ironman!” My coach (Mike Moriaty) and the rest of my club members from M.A.D Multisport were also at the finish line. I was hugely surprised to see Raynard Tissink (winner) at the finish line; he was there to hand me my medal and that was a moment that I will never forget. Only at my hotel later did it sink in and I got all emotional.

The support from the crowds must have been awesome.
There were over 38 000 spectators. It was the crowds who lifted my feet that the day. My favourite spectator on the cycle leg was a guy standing at the side of the road with an iron and an ironing board, shouting, “I am an Ironman!” I almost fell off my bike laughing. I have never experienced such an atmosphere.

How did you feel the next day?
I was stiff, though not as bad as I thought I would be. Knowing that I completed Ironman made the stiffness worthwhile. I was on the phone all day with family and friends who phoned to congratulate me, so I didn’t have time to even think of being stiff. Ironman fell right in the middle of filming the new season of Idols, but the team from M-Net and Idols gave me leave from set to take part. This also motivated me, because I knew I couldn’t come back to the set without a medal. When I arrived back on set the day after Ironman, they surprised me with cupcakes and everyone on set now calls me ‘Yster’.

Will you be back next year?
Yes! I can’t believe I have to wait 360 days until I get to do it again. I can’t wait!

What is your next goal?
I am training for the Gauteng winter trail series in June and my big goal for July is the Knysna Marathon which takes place on my birthday.

Any chance of seeing you at Comrades 2011?
Maybe…

I dedicated my Ironman finish to my parents who never once thought I wouldn’t be able to do this. My biggest dream came true when I walked across the finish line with them.