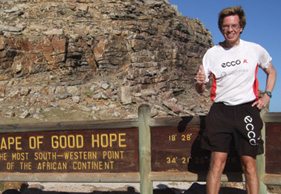 In March a spindly-legged, bespectacled Danish runner arrived at the southernmost point of the to complete a 21 494km run from to . As impressive as that may sound, it was still only halfway in Jesper Olsen’s second World Run. – BY SEAN FALCONER

When Jesper Olsen ran back into on 23 October 2005 to complete the first fully GPS-documented round-the-world run, he had covered 26 232km in 22 months to set the new longest run record. He had averaged 45km a day as he ran east through Europe, , , , the , and – but he wasn’t finished.

Unbelievably, Jesper was already planning an even bigger challenge, a north-south route of 40 000km from the top of the globe to the bottom, and back. Starting from the northernmost point of Europe, Nordkapp in , he wanted to run south through Europe, the Middle East and Africa, to Cape Point in , then fly to the southernmost point of South America, , and run north to , in , at the north-western tip of .

And so in July 2008, after two years of planning, fundraising and training, Jesper set out on World Run 2 with his Australian running partner, Sarah Barnett. Unfortunately, while running through Turkey in December 2008, Sarah had to withdraw, having covered 7 334km. Jesper continued alone, reaching Egypt in January 2009, and just over 14 months later, on 15 March 2010, escorted by members of Cape Town’s Sartori Running Club, members of the media and a howling south-easterly gale-force wind, he reached the Cape of Good Hope.

The welcoming party included the Danish Consul-General, who had a special gift for him – a new passport to replace his now full one. “I think I’ve passed through 35 or 36 countries on this run already, and there are at least 11 more to come in South America and North America, so the new passport will be very necessary,” explains Jesper. “I’ve enjoyed a unique opportunity that very few people get the chance and time to do. To experience each of the continents as I have, and the different cultures, is just a huge privilege.”

However, Jesper admits there were times he didn’t think he would make it to this halfway mark of his second big run. “I was very chuffed when I realised I had made it! There were many days when I thought this is just too much, especially in , where I struggled with malaria. Luckily I caught a milder strain and could continue.”

It took Jesper two years to lay out his route, especially taking into account the timing so that weather conditions would be favourable. Next he made contact with the athletic federations in the various countries, asking for help to meet local runners or running clubs along the route, as they would know best which roads to take, or where to stay and eat – and this is where the South African running community endeared itself to the Dane.

“I had so much support in your country. Even when the local running clubs didn’t know I was coming, they often came out at short notice. For the three months I was running through South Africa, I only had two days where there was no running club looking after me – and that is quite a testament to your running community. The only other countries that are like this are and . Like South Africans, the people there just love long distance running.”

There was another place Jesper found surprisingly good support. “One of the problems in the Sahara and , around the small oases, was not being allowed to continue without first stopping for a big meal!” Unfortunately, there were also bad experiences. In , he says the corrupt officials seemed to have an attitude that, “foreigners are money, not people,” and in he was regularly stoned by the locals and sometimes had to take rest days to recover from the bruising and cuts he suffered.

Now that Jesper has finished the North-South run, he will put up his feet until December, when he will begin the South-North leg. “I have decided to rest after this tough year of running straight through . It turned out to be even harder than my 10 500km run across during World Run 1. I have to admit that I didn’t understand just how difficult the logistics and how unavoidable severe illness would be. For example, during a three-week period I regularly had a 40-degree fever, sharp stomach pains, nausea and vomiting – not ideal for running in the tropics!”

“So to be in top condition for the South-North run – and to get the timing right for the optimum weather at the tip of in December/January – I will take a long rest. Overall, the logistics are better lined up for the South-North run, and the toughest part will be in the first half, so I will get it out of the way first.”

BITTEN BY THE RUNNING BUG

So what makes a successful political scientist and author put his life on hold to run around the world – not just once, but twice? Jesper simply answers, “Running has always been a bigger part of my life than education and jobs.” He started running at the age of 12, then at 15 decided try a marathon and finished in 3:26, but it would be another ten years before he ran another 42km, setting his PB of 2:27. A few years later he tried a 100km race and broke the Danish record. He then added the 50km, 12-hour, 24-hour and six-day records as well, and that led to World Run 1 in 2004 – because he believes that the human body is meant to run long distances.

“I think that the ability to run extreme distances is a thing all humans share. It’s not just the talent of a few individuals. Through thousands of years of evolution it was normal to be in motion all day. Only within the last few centuries has it become normal to sit down most of the day. My experience is that we have not yet lost the ability to overcome immense endurance efforts.”

Jesper admits that he is also motivated by setting records. “It was definitely nice to become the first person to run around the world. If somebody had done it before, I wouldn’t have been so keen. That motivated me a lot, especially whenever I thought of quitting. I asked myself how I would feel when somebody else did it.”

For World Run 2, Jesper says that his longest day was a 95km stretch in , while the shortest day was a mere 10km when he was ill. “One of the most important things is to go according to my body. If I am planning 40km for the day, but I wake up and my body doesn’t feel recovered, then I step down the distance to what I feel I can do.”

Jesper adds that his two world runs have given him a good idea of what the human body can do. “On both runs, I was doing 50km a day for the first 17 000km, but then suddenly I was not able to keep it up anymore, dropping down to 30km. I would imagine it’s because the body can sustain itself up to a point – like in a marathon, the body can go to about 30km before it starts burning fat. After about 17 000km, the body can’t recover as quickly, no matter how many extra rest days I put in.”

He says it also helps to find mentally stimulating ways to get through each day’s run. Besides trying to solve philosophical problems, he sometimes reads the news on his cell phone, or types his daily blog – while running! “The thing that does not go through my head is how far is left to go. A Danish journalist asked me after the first kilometre of World Run 2, ‘So how do you feel now that you have done one kilometre and have about 21 000 left?’ That is not what you want to hear!”

With a few months of rest ahead of him, the obvious question is what Jesper is looking forward to most about being at home again for a while. “That’s an easy one to answer,” he laughs. “Being a Scandinavian, what I miss most about home is the winters. I haven’t had a winter in two years, and my body is asking when it will get some cold weather again.”

PACKING IT ALL IN

Two of the most important considerations when undertaking a 40 000km run are your equipment and food. In some areas you need to carry everything with you, while in other areas you can get what you need from local shops. Jesper says he is lucky that his food requirements are fairly simple…

“At home I have a nutritional sponsor, but I can’t carry half a ton of products around the world with me, so I have to make do with what I can get. I usually ask for biscuits, chocolates, baked beans, Coke and water. Also, I prefer eating and drinking the same as the local people, because bringing fancy stuff puts more distance between me and the people I meet.”

When asked about gear, Jesper says that he has run through 29 pairs of shoes, three watches and four cell phones thus far in World Run 2. “Some of the electronic gear couldn’t take the humidity in . The clothing lasted much better, and I only used three or four shirts and pairs of shorts. I also carried a lightweight expedition tent, and found it easy to cool down in it.”