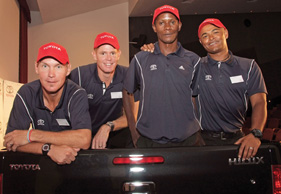 One of them is known as one of South Africa’s greatest cricketers while the other is a South African soccer legend who played 74 matches for Bafana Bafana. Some people would think it strange to see Shaun Pollock and Shaun Bartlett’s names associated with the 2010 Comrades Marathon. However, supporting each other across various sporting codes is exactly why the two Shauns have gotten behind this year’s historic race. They will be present on the day to cheer on all Comrades athletes. The two Shauns shared their thoughts on Comrades 2010 with Modern Athlete.

THE CRICKET HERO
“It was never an option to run the race – that would be far too great a challenge,” chuckles Shaun Pollock. “But I figure that if I am there to support on the day, then at least I am doing my part for the sport of road running as well as charity!”

Shaun (36), or ‘Polly’ as he is affectionately known, retired from all forms of cricket in 2008. He is currently involved with various appearances and does some Master of Ceremonies work. Since retiring he has decreased his training regime, focusing more on family time and business engagements. “I still work out and will always be interested in all sports, so I think it will be nice to watch this spectacular sporting event as opposed to competing in it. I am looking forward to cheering everyone on from the VIP area for once!”

Shaun’s father, Peter, has taken on several Comrades Marathons. “So I suppose there is some pressure for me to compete in order to rise to the challenge! But, in all seriousness, there is no way that one can compete in a race of this magnitude based purely on proving a point. That alone would not be enough to get you through even the first two hours of the race! The Comrades, and those who compete in it, are truly on a different scale. I am looking forward to being a part of it, and I absolutely will be out and about on the day, spurring each athlete on.”

Maybe one day he will rise to the challenge and take on the mighty Comrades, but for now Polly is happy to be a supporter!

THE SOCCER LEGEND
“Comrades is an incredible race, and I have the upmost respect for all those even attempting it. I would feel no shame were I unable to complete the race, but instead great pride in even attempting,” says Shaun Bartlett, who is retired from all forms of soccer. He is currently contracted to SuperSport as well as ESPN for the FIFA World Cup™ 2010. “I am thoroughly enjoying my ‘retirement’, and filling my time with a series of new sports is keeping me fresh and interested,” says Shaun, who recently competed in the gruelling eight-day ABSA Cape Epic Cycle Challenge – a race consisting of over 700km of mountain biking throughout the Cape.

“I thought I had done well just to finish the Epic, but I know that Comrades is an even more challenging event – one which I am not yet ready to take on! I am looking forward to joining Polly on Comrades day and I hope that we can assist those struggling to dig deep and keep putting one foot in front of the other.”

“As professional athletes, we have all been through times when we honestly thought that we could not go on – whether in the gym, on a training field, or during the game. Sometimes we were injured, but quitting was not an option – and for that reason, I am looking forward to helping whichever athletes need it on the day. I will be there in full spirit, willing them not to quit and to keep pushing.”

Shaun loves spending time with his family and has three active boys. “I often feel like I have run the Comrades at the end of a weekend! Knowing how hard the Comrades runners have trained for this race, and balancing that with a family as well as a job is amazing and I respect each athlete who is going to take to the start on 30 May.”

“My wish for this year’s race is to have the lowest injury rate ever. I know that there is nothing worse than training so hard, being so prepared, then getting injured within the first few minutes or hours of the competition. There can be no greater heartbreak than sitting on the sidelines. I would like to wish each athlete the very best of luck, for one needs luck if you are not to be injured!”

Look out for the two Shauns at the Toyota water points or in the Toyota hospitality suites!