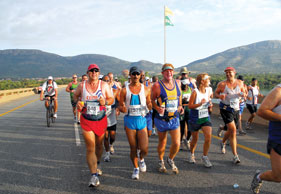 The Old Mutual Om Die Dam 50km & Half Marathon in Hartbeespoort is a race with a reputation, not only for its magnificent views, but also for its legendary climbs. Ask any regular runner about Saartjiesnek and you are bound to get an earful. This year saw more than 6 000 athletes tackle this ultra, which celebrated its 20th anniversary and included a new 10km event. Vlam Pieterse, a member of Hartbeespoort Marathon Club, led a six-hour pacing bus to a qualifying time for Comrades.

The alarm rang at 4am. Was it really time to get up? My back was still sore from climbing up and down a ladder helping with decorations at the finish area of the race. I was wondering if I would make it.

At the start my bus passengers were gathered and I gave the final instructions about our race strategy. I felt a lump in my throat as Jan de Wet prayed in nearly all 11 official languages. We were on our way. At the first watering point I shouted to the bus, “Make sure you take enough fluids as it is going to be a hot day!”

Commando Nek came early in the race and was the first of several climbs. “Walk firm and brisk. There is no time to waste,” I reminded them. With a few short runs in between our walking breaks, we were at the top. “Slow down. Remember speed kills,” I shouted. We made our way along the route as it reached to the long bridge crossing the dam and on to Pecanwood.

The route followed a steep climb from Pecanwood up to the chicken farms and our bus began to grow in size towards Pelindaba. “Ons is op die paal,” I shouted, referring to the method of walking two to three telephone poles and running the next five. I tried to set short goals to help the runners forget about the bigger picture.

With the infamous Saartjiesnek approaching, many runners grew quiet. “One last big hill and we can almost taste victory,” I encouraged. As we ran down the other side, we started making up for lost time. We passed Meerhof School where piles of milk tarts lay in wait to lift our spirits. Most runners were tired as we crossed the dam for the last time. “A little bit of suffering now and a lot of glory waits,” I assured them.

When we reached Malan Street we had to run almost 10min/km to finish under six hours. “Who still needs to qualify for Comrades?” I asked. About eight hands shot up. “Stay with the bus and you will make it!” As we turned the last corner the announcer started counting down: 20, 19, 18… We all started sprinting and crossed the finish line with seconds to spare.

Thanks to everyone for all the support. See you in the next bus!