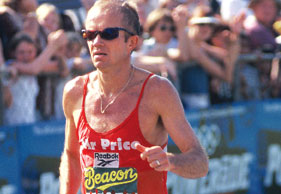 Despite his wealth of Comrades experience, former race winner Shaun Meiklejohn may be a little nervous when he lines up for the big ultra in May, but he will be spurred on by the great cause he is running for – and a bit of friendly competition.

With 21 Comrades Marathon medals to his name, ten gold and the rest silver, it’s strange to hear 1995 winner Shaun Meiklejohn say that he feels like a novice ahead of this year’s race, because it will be his first Comrades in seven years. Having run every Comrades but one between 1982 and 2003, the 48 year old explains, “I just felt I needed a break. After that I didn’t do much in terms of running. I put on weight and battled for a few years to get started again.” He also struggled with calf injuries and thought his running days were over.

However, things turned around in May 2009 when a nutritional consultant in Westville tested him on the B.E.S.T. (Bio-Energetic Stress Testing) system. Advised to eliminate wheat, dairy, sugar and alcohol from his diet for six weeks, Shaun soon lost 15 kilograms. “My energy levels increased dramatically and running became enjoyable again.” Fortunately, his calf problems also disappeared.

GREAT CAUSE
Shaun, who lives in Hilton and works as a financial manager for a plant hire company in Pietermaritzburg, now says that he realises he has a lot to be grateful for in life, including his running ability, and wants to give something back. “I would like to see others benefit from my run, either financially through fundraising or through creating an awareness and introducing new talent to the sport.”

He will therefore be running for the Comrades Marathon Association’s Amabeadiebeadie charities, the Mr Price Red Cap Foundation as well as the iThemba Projects’ run4africa initiative to form the Mashaka Running Club in Sweetwaters. Shaun has offered to be an ambassador and coach for the new club, and says, “I hope that iThemba will also be able to target other areas where there is a need, such as the education of children through proper mentoring and training of their teachers.”

FLASHBACK
Shaun ran his first Comrades during his second year at varsity in Pietermaritzburg. After earning seven silvers he broke into the golds in 1989, and national colours followed. In 1994 he represented South Africa at the World 100km Champs in Japan, finishing fourth, a result he repeated a year later in Holland. He also won the famous London to Brighton ultra in the UK in 1994. Then came his big day. “I started running for Mr Price in 1995 and their sponsorship allowed me to run as a full-time athlete. I won the Comrades that year, giving Mr Price Athletics their first winner. I have received tremendous support from them over the years and they are now supporting my endeavours to give back to the sport.”

He went on to become one of only seven runners to reach double figures for Comrades gold medals. “I’m really chuffed about it, because not many guys have ten or more. I never considered myself a natural athlete, so running ten golds made me really proud.”

Shaun says he hopes to finish in seven hours and earn another silver this year, but will also be keeping an eye on a number of well-known faces. That’s because the CMA liked his idea of a Legends Challenge for 2010, so Shaun will be racing the likes of Bruce Fordyce, Willie Motolo and Andrew Kelehe within the main race. “I’m sure the ‘old timers’ still have a bit of a competitive streak in them to get the best out of these tired bodies,” he concludes with a smile.

Publisher’s Note
What Shaun is doing for all the Modern Athletes of the future is a true example of what makes our sport and the people involved so special. Shaun, we at Modern Athlete salute you and appeal to all Comrades runners, supporters and our readers to support your cause as we wish you well for the 30th of May.

Meiklejohn’s Mantra
With many older, former Comrades runners returning for the 85th anniversary race this year, former winner Shaun Meiklejohn offers the following advice:
1. Set realistic goals: You’re older, you’ve had a lay-off, so you probably won’t be able to run at the same level as before.
2. Do enough training: You can’t just rely on experience to get you through Comrades. You need time on your legs.
3. Rest! Nowadays my hard training days aren’t as hard, but I still make sure I have easy days between them.
4. Prepare mentally. You need a plan for tackling the Comrades. I break it up into four 21s, then a little 8km time trial, which seems much less daunting.