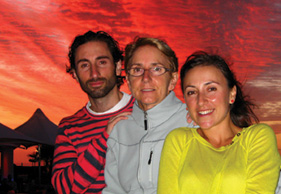 We all run for our own reasons, be it to try and win a race, lose weight, better a previous time or just for the health benefits. Sometimes, running goes far beyond these reasons. For some of us, running becomes an emotional journey, helping us through life’s toughest challenges. At the age of 57, Marianne Peters started running after she lost her beloved husband on Christmas Eve 2009. Incredibly, she has just completed the Two Oceans Half Marathon. Here she shares her journey with Modern Athlete.

I have always tried to be active, going to gym and walking around the block with friends. I eventually progressed to walking a couple of 702 fun walks. I remember my first 7km walk; I was so unfit, but slowly I started training more and went on to walk the 14km and 21.1km 702 Walk the Talk.

When my husband, Glenn, was diagnosed with diabetes towards the end of 2007 we started walking together in the mornings as a way to help manage his diabetes. In February last year he underwent an operation and was diagnosed with stomach cancer. For a while we could not walk as he was in and out of hospitals and had to undergo chemo and radiation therapy. As Glenn got stronger we started walking again, initially just once around the block, then building up to three or four times. Depending on Glenn’s health, we would sometimes walk up to 9km. We enjoyed our walks so much!

MY WORLD WENT DARK
We have three wonderful children, Lyle (33), Christine (31) and our ‘baby’ Verena (25). They are all very active and love running. Last year they ran the Two Oceans. When they came back they were so enthusiastic and said they loved every minute of it. I said to my husband that before I turned 60, I would love to run a half marathon with my kids.

Sadly Glenn’s health deteriorated and he passed away on Christmas Eve. My whole life changed. My children were amazing and so supportive in this time. Lyle moved back with me and Verena came back from Zambia where she was living. Their presence helped me more than they will ever know. I had good days and bad days; the mornings were often the worst times.

MY GOAL
That’s when I decided it would be best if I started running in the mornings. I set myself a goal: the Two Oceans Half Marathon. Initially I started by running around the block. I shared my goal with my kids. Christine is a long distance runner and immediately pulled out a training programme! Verena enthusiastically joined in on my runs. Running was completely new to me. I used to go to gym to stretch and tone, but I had never even dared to run on a treadmill in the gym. Now I was running on the road! Luckily we live in an enclosed area, so it was quite safe for us to train. We started running the 5km loop my husband and I used to walk. Slowly but surely, we extended our distance. We started getting a bit more serious and even added up our weekly distance and measured our routes with the car.

I loved our early morning runs. It was still dark when we went out, but to me it had a special meaning. It meant I had to get up, go out and run! It was good for me. Verena and I talked a lot while we ran and sometimes we went to Sunninghill where we met up with Christine.

MY FIRST RACE
My kids all said it would be best if I ran at least one race before the Two Oceans Half Marathon. The Om Die Dam Half Marathon was on the race calendar and I decided to do it. I had walked the race a couple of years ago and remembered how frustrated I had been walking, when everybody else was running around me.

On the morning of the race Verena and I lined up at the start. It was perfect weather to run in and a beautiful morning. I felt good throughout the race. We only walked one little steep hill. I saw so many moms pushing prams and little kids jogging that I thought to myself, if they can do it I can surely manage! We got to the finish in 2:29. I was very happy. My feet were a bit tender for a day or two but I wasn’t really sore. The race gave me peace of mind and I knew I was ready for Two Oceans.

TWO OCEANS HALF MARATHON
I flew to Cape Town with Lyle and Christine, but unfortunately Verena could not make it. The night before the race I wasn’t nervous, but I thought it would be nice to run with someone.

There were a lot of people and it was still pitch dark. I couldn’t see anyone I knew. It started drizzling a bit, and as the gun went off I expected most people to walk for a while because it was so crowded. Surprisingly we were able to start jogging straight away. I started at my own pace, remembering what all my friends had advised; start slowly and finish strong! I was amazed at how dark it was. It only started getting light about 45 minutes into the race. All the people lining the roads were amazing. They were all cheering and encouraging the runners.

I tried not to panic as many runners overtook me. I kept reminding myself to keep to my own pace. I expected a hill at the 13km mark, so when I hit a hill at the 11km mark, I was a bit worried! Luckily when I got to the 13km mark there was no hill. I had so much fun and the course was beautiful.

RUNNING FOR GLENN
While running I thought about my children and my late husband. I got closer to the finish and knew Lyle had to be finished with his race. I thought of Christine who was running the ultra and knew I couldn’t give up! She was doing 56km and I was only running 21km. What an eye opener it was; I now understand how strong you have to be to run 56km. Those thoughts kept me moving towards the finish line.

I thought of Glenn and how I was running the race for him. Lyle and Christine also ran their races in their father’s memory. It was part of our way to honour and remember an amazing man.

A PROUD AND EMOTIONAL FINISH
Running into the university grounds was spectacular! I was so happy to finish, but also felt emotional. Lyle later told me he took some snapshots of me and had shouted but I didn’t hear him. My 2:26 finish made me happy, and this was reinforced by my pride in my son; he ran an excellent race and got a silver medal.

Lyle and I waited for Christine to finish the ultra. When I saw her finishing I again felt the sense of pride in my family. She had bettered her time from the previous year. The whole day was such a wonderful experience. It was great speaking to other runners afterwards and sharing stories.

The next day Christine took us on a drive over Chapmans Peak and showed us the route she ran. While driving on the route I thought it would be great if I could get stronger and maybe take on a 30km in future. I don’t know if I could run 56km though… the distance sounds horrendous. Our whole family plans to run again next year. Every Two Oceans we run, will be in Glenn’s memory.

RUNNING WORKS FOR ME
I am amazed at my children. They were more proud of me for finishing than I was. I couldn’t believe how great they thought I was. The reactions of other people also surprised me; they all think I am doing something special.

Since I started running my cholesterol levels have come down, and I am also eating healthier (Christine, my dietician daughter, makes sure of that!). My advice to anyone thinking of taking up running late in life as I did, is to start slowly, gradually build up distance and most importantly, to just enjoy it!

Running makes me feel better and I love being out on the road. The best thing is that you can let your thoughts go while running. It can take you anywhere you want to be. You can cry if you want to or you can think things through. I enjoy the physical experience, but most importantly running has helped me come to terms with things in my life. I haven’t chosen another race to run yet, but I will soon.