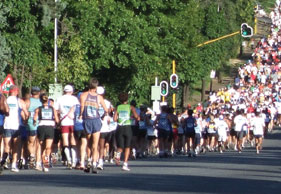 Most runners shy away from hill running because they see it as a tough workout. Most of us hope that if we clock up enough kilometres, we can make up for the lack of quality hill training. Stop fooling yourself! If you want to improve your running, you have to start running hills. It can mean the difference between a PB or just another average race time. And it is not as hard as you think… Three experts share their hill running experience with Modern Athlete.

Make no mistake, running hills is not easy. It leaves your legs aching and burning, and you are bound to reach the top huffing and puffing. But if you don’t train on hills, you may pay the price come race day. Nick Bester, former Comrades winner and one of South Africa’s top all-round athletes, has a saying that holds true in the case of hill training: “Those who sweat more in peace will bleed less in war. Roll up the hills!”

NOTHING NEW
Hill running as a quality training method is nothing new. Two of the great coaches of the past who used hill running as an important component of a weekly training schedule were Percy Cerutty, who trained a number of outstanding athletes in the 50s and 60s, and Arthur Lydiard, a New Zealand coach. He developed a training system that took athletes to world records and Olympic gold medals.

“Although the exact physiological effects induced by hill training have yet to be scientifically researched, runners should take advantage of the expertise of the great coaches and runners who have found it to be an important addition to a training programme,” says Prof Andrew Bosch, associate professor at the University of Cape Town/MRC Research Unit for Exercise Science and Sports Medicine at the Sports Science Institute of South Africa.

BENEFITS OF HILL RUNNING
Donovan Wright, double gold medallist for Two Oceans and Comrades, and winner of 27 marathons (with a personal best of 2:17:25), says hill training has been significant in his own preparation and in the preparation of athletes he has coached. “The benefits of hill training stand without challenge. It is well documented and practised by leading athletes and coaches across the athletic globe. The benefits include:
Increased strength and power from exerting extra force on muscles to propel your body up the hills.
Increased VO2 Max due to the massive cardiovascular demand of hill running.
Increased speed; the steep gradient of hills improves our speed on flats.
Hill running makes you mentally tough and resilient.
Increases strength, muscle and aerobic power.
Improves stride frequency and length.
Strengthens your hamstrings, calves, glutes and hip flexors.

DIFFERENT STROKES FOR DIFFERENT FOLKS
Always warm up before you start. Most experts recommend at least 3km of easy running before and after each hill repeat workout. Here are three experts’ takes on different kinds of
hill training.

DONOVAN WRIGHT
Training suited to more experienced and faster athletes.
Hill repeats: Choose a 600m hill with a 30-40% gradient. Do 12 repeats. Run the first three steady, the next three medium, the next three fast, and the last set flat out. Use the starting point and finish point as a guide and set three points for yourself, at ? up the hill, halfway and ? up the hill. Run the first three repetitions steady to the ? point pushing hard to the top of the hill. Run the second set of three reps steady to the halfway mark before running hard to the finish. Run the third set of three reps steady to the ? point then run hard to the finish. Run the last three reps flat out to the top. Walk down instead of jogging.
Hill fartlek: Choose a hilly area. Run hard up every hill. Jog down hills and flat areas. The emphasis should be on speed up the hill and over the crest. The sets should last between 45 minutes and two hours.
Sustained hill fartlek: Start at a steady pace that you can maintain throughout the run in a hilly area. Run hard up every hill at a pace much faster than your sustained pace. After cresting the hill return to your sustained pace and repeat the process. The sets last between 30 and 90 minutes.
Strength endurance hills: Start with a track session of ten x 1000m. Jog 200m after each 1000m. Following the track session, immediately jog to a hill and run up at a steady pace. This is to practice good form rather than pace. Jog down after each hill repeat. The entire session should last between 1:45 and three hours.

ANDREW BOSCH
Training suited to beginners, intermediate and experienced runners.
Physiologically, simply running repeat sessions up a hill will achieve the additional muscle adaptation desired, together with some probable improvement in running style.
Excellent results can be attained by simply running hard and fast up a hill, concentrating on keeping a good running style while doing so. It is not even necessary to cover a full 300m as mostly prescribed. Both slower and faster runners should run at a perceived hard and fast effort, with good form, for approximately 60-75 seconds. Slow runners will cover less ground, elite runners a lot more. On reaching the designated time, for example after 60 seconds, turn and jog back to the bottom, at which point the process is repeated.
As with all training, hill training should be introduced gradually, in a controlled fashion. Specifically, the first session may consist of only four hard uphill runs, followed in the next session by five, then six, etc.
Good results can be achieved by doing one hill session per week.

When running uphill quickly the heart, lungs and leg muscles are working at their optimal level. Speed sessions can sometimes leave you injured, therefore it is sometimes a good idea to substitute a speed session with running a short steep hill for 60 to 90 seconds. Do two quality sessions per week; one with short repetitions (eight to ten repetitions of a one/two minute hill) and one longer quality session (six repeats of a three to five minute hill).

TOP EXPERT TIPS
To run hills efficiently concentrate on the following:
Lean into the hill.
Give short rhythmic steps.
Work with your upper body and pump your arms to gain good knee lift.
Keep your upper body relaxed, especially your neck muscles and shoulders and keep your hands open.
Concentrate and do not look up to see where the top of the hill is. Rather look down or about five to ten metres in front of you.