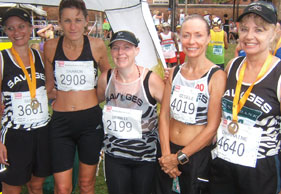 Qualifying the first time for a race such as Two Oceans or Comrades is often a daunting challenge and holds special memories for most runners. Susan May and Debbie Honneysett, members of Savages Athletic Club, shared their qualifying experiences at the Maritzburg Marathon in KZN.

Debbie Honneysett
My first marathon was in March last year and I finished in 5:10. I managed to finish my second marathon in October in 5:03. The Maritzburg Marathon was my last chance to get the qualifying time I needed, and I knew that if I missed it this time, it would end my dream of running this year’s Two Oceans.

I decided last year that I wanted to run Two Oceans as my long training run for Comrades, and the Maritzburg Marathon was the last qualifier for Oceans. My friend, Charmaine, who  had already qualified, offered to run with me as support.

It made such a difference having Charmaine run with me; it felt like we were in it together. At around the 25km marker, the five hour bus came past us and I started stressing! Charmaine encouraged me to stick to my pacing chart. I remembered my friend Emma saying, “Run your own race,” so I just focused on putting one foot in front of the other.

Charmaine and I stayed together until the 36km mark and then I took off! Charmaine had run her first marathon two weeks earlier so she was still feeling it in her legs. Another friend, Gisele, had already finished the marathon and had turned back to run the last 5km with me.

My parents were at the finish shouting for me and the announcer was saying, “Here comes Debbie; she’s going to qualify!” Crossing the line in 4:54:35 was a wonderful feeling. I had done it!

Back at the Savages tent everyone congratulated me and my parents even brought champagne! To all my friends and family, thank you! Well done to the organisers for an excellent event.

Susan May
When I joined Savages AC in April last year I could not imagine that in just less than a year, I would be running my first marathon and qualifying for my first Comrades!

After watching Comrades runners from the Savages tent on Cowies Hill last year, I knew that running Comrades was something I had to do. I started training and the weeks leading to my first marathon were both exciting and daunting. I could not wait to get 10km into the marathon, warmed up and enjoying the race.

The first 21km seemed to fly past. The next 9km felt extremely long and hard but when we reached the 30km mark, I knew I had to hang in for only 12km to the finish. The last few kilometres were so exciting because I knew we were about to achieve our goal and qualify. My dream of running Comrades was within sight and becoming a reality!

We hoped to finish in 4:20, to get the seeding we wanted for Comrades. And we did! We made it with five seconds to spare. There are so many people who encouraged and helped me. Running has changed my life. Not only do I get to do the sport I love so much, but I get to share it with new and wonderful friends.