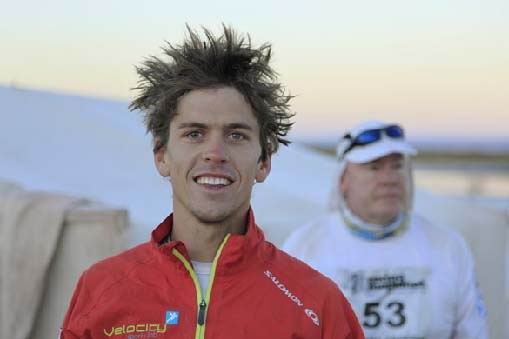 I woke up this morning with a few butterflies in my stomach as stage 4 heads straight through the infamous salt flats..

It was freezing cold again this morning….I don’t do the cold well so I will have to make a plan for Antarctica!

We started off stage 4 on more sand dunes….I thought I had seen all the sand dunes Chile has over the previous three days. Just before the first checkpoint we headed down a really steep dune into a river with loads of vegetation, for a second I thought I was back in the jungle again. There were seem deep areas in the river which I managed to avoid but a few competitors were not so lucky and I have been hearing complaints of wet i-pod’s and cameras.

After checkpoint two I headed through a small village and was greeted by a few dogs snapping at my ankles… Luckily I survived and headed along a 13km soft sandy track to checkpoint 2 and the start of the salt flats. I was expecting the worst going through the salt flats but it was actually not that bad… It was a mixture of more salty coral like terrain and softer salts flats that now and again my feet would pierce through. I survived the salt flats thanks to my Salomon S LABS… and after checkpoint 3 it was a quick 6km to the finish on a jeep track…. As I am typing two dogs are crossing the finish line with a competitor… apparently they followed him across the salt flats…

I finished feeling strong today and I am looking forward to getting the long stage out the way and finishing in San Pedro!

Thanks to everyone for your messages of support!!!

I will keep you posted.

(All attached pics from RacingThePlanet.)