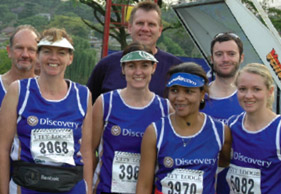 Mention the Tough One and most runners start smiling nervously. Those who have run it know that this race is not for the faint-hearted. Just when you think the hills are done and dusted, another few await… Despite this, the turnout usually exceeds 6 000 runners. Cathie van Rooyen, a runner from Discovery Athletics Club West Rand, told Modern Athlete about her race.

I was nervously facing my second Tough One and thought about cancelling due to the very unusual wet, freezing weather the week before race day. Unfortunately, I saw on the weather forecast that the sun would return on race day, so I had no excuses left.

The thought of 32km made me nervous, especially because I don’t have as much running experience as my running buddies. I got flashbacks of my first few 32km runs. The first, in Boksburg, almost saw me committing serious bodily harm to my sister, who was only trying to help me through the bad patches. My second was in Pretoria and had me cursing up and down the hills. All this baggage was messing with my head!

I met up with my friends at Old Parks in the early hours of the Sunday race day. The start was crowded and I secretly prayed for the gun to go off before I changed my mind and stayed behind. Slowly we made our way up the fi rst hill. My sister, Debbie Egan, had been resting after her run at the Mont-Aux-Sources 50km Challenge and she decided to take it easy and run with me. This was a nice change, as she usually gallops off with the faster runners.

Only later did I realise that she was actually hanging back because she had no money on her and wanted to join in on our annual Tough One ice cream tradition. This tradition was started a few years back when our late running friend, Joe van der Merwe, and Karien Carstens decided the Tough One needed something nice to look forward to. Everyone would stop and have an ice cream late in the race! I had never been fast enough to join the ice cream feast, so this time I carried money to make sure I didn’t lose out.

The marshalling was excellent and when the water points seemed to pop up much sooner than normal, I realised that I was walking far less than in other races. I was not wearing my watch and it was nice listening to my body instead of a watch.

At around the 26km mark, I hit a bad patch. My calves threatened to cramp and I decided to walk. My sister kept a watchful eye on me and 1km further, I had sorted myself out. As we neared the Randburg CBD, we got closer to our ice cream stop and I felt a new surge of energy. With our ice lollies safely in our hands, we took on the last 3km. There was one nasty little hill before the end and we walked it, enjoying the crowd support from the roadside.