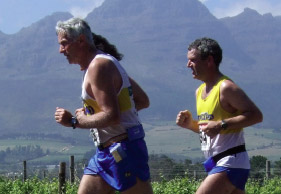 It was with nervous anticipation that I boarded the plane at OR Tambo in Johannesburg with a group of 22 fellow club members – the BIG DAY had fi nally arrived. We were off to Stellenbosch to race the Mr Price Winelands Marathon. We left a cold, wet Joburg and arrived in beautiful sunny Cape Town on
the Friday afternoon. We made a quick stop at the famous Paul Roos Gymnasium school grounds to register, where I am happy to say we also received the latest copy of Modern Athlete, before checking into the Protea Hotel, which is blessed with some of the most magnifi cent views of wine farms and mountains.

The weather was perfect on Saturday morning – slightly overcast and cool – and there was a great atmosphere at the start line. Our intention was to run the race in a small bus but Barry Holland and I got caught up chatting midfield before the gun went and it took us close to a minute to cross the start line, not an ideal thing to do if you’re chasing a PB. The first section is relatively fast so  it was 5km before we caught our bus. At the 6km mark, we were introduced to the first hill on the course, a long gradual
pull that took us to the 10km mark. If you’re not careful, and a bit overeager, it would be easy to leave your race right here. Our small bus was already splintered by the time we reached the summit. I had fallen about a minute behind as I had only managed to settle into a good rhythm around 8km. My time
at 10km was 48:15; I knew I was already off goal pace so I worked hard on the long downhill section which took us to 15km. We had gotten a smaller version of our bus back together by this stage, but there was no talking taking place and by 18km we were strung out and it became each man for himself.

I went through 21km in 98:37; by now the sun had come out and the heat was upon us. This section of the run is undulating and it was around here that I was picked up by a friendly nameless runner from one of the local clubs. For the next 15km, this black gentleman and I ran stride for stride, not saying much besides encouraging each other to stay on pace. We took turns collecting water from the tables and although we did not manage to finish together, I owe much of my race to this gent. It is moments shared
like this that are a great example of what makes South African road runners from all walks of life, such great Modern Athletes.

At 26km we encountered our next big climb before crossing the road to head back to Stellenbosch. Although at this point, there was still a long way to go, I experienced a sense of relief that we were now heading towards the fi nish line. I could also see the runners on the opposite side of the road and often shared words of encouragement when I recognised a familiar face. All of this helped to pass the time
and the kays. I ran my fastest kay of the race, a 4:10, at 31km and went through 32km in 2:29:57. We encountered the steepest hill of the run at 36km; this is where a lot of runners started to walk as the distance and heat took their toll, and although I had no second gear left, I knew I had to just try hold it all together. Even though the lactic acid was now starting to flow through my legs, it was the last climb from the mushroom farm, from 39 to 40km, that really took it all out of me.

I had forgotten how far 2km on wobbly legs could be. I diverted my focus to the image of our son Casey’s smiley face and proceeded to come up with names for our new baby, expected in December. I am sure people thought I was crazy as I muttered various options to myself. I managed to eventually cross the line in a time of 3:22 in 89th position, which was a new PB by 13 minutes. Although I had missed my goal time by a few minutes, I had given it all I had on the day and was very pleased with the result. As promised, I celebrated by sampling a few of our country’s fi nest cultivated grapes, which never fail to impress.

The organisation of the event was magnifi cent, registration was a pleasure, the markers spot on, plenty of watering points, lots of friendly runners on the road and a great finish line. A big kudos must go to the organisers, Helderberg Harriers, and sponsor Mr Price, as well as all the WP/Boland Modern Athletes.

If anyone tells you Winelands is a fast coastal marathon and a great place to chase a PB, they’re pulling your leg… However, it is a great race on a testing course with beautiful scenery, and I would highly recommend the weekend to all runners from up-country!