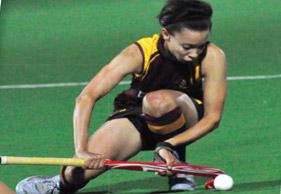 Running plays a large part in almost every sport practised at a competitive level. We explore running’s role in hockey by speaking to South African women’s national squad stalwart Lenise Marais, who already has over 100 caps at the age of just 24.

Hockey can sometimes appear to be a largely stop-start affair, but the running never stops and there is little time to catch your breath during matches, says veteran national team defender Lenise Marais. “I have to follow my striker wherever she goes, so there is a lot of stop-start sprinting, and I’m always running, looking around to track opponents. I’m also involved in short corners at both ends. Sometimes I get to do a bit of walking, which is nice!”

That’s why the national team defenders do just as much running in training as the strikers, says Lenise. “We’re all on the same basic training programme, with lots of running, because we defenders have to stay with the strikers we’re marking. Also, I have to work on my speed, because I’m quick over the first five metres, but not after that.”

TRAINING REGIME
A typical week of training for Lenise sees her running from Monday to Saturday, on top of three to four field sessions and three to four gym sessions. The running usually comprises a combination of speed, endurance and agility, some fartlek sessions, long runs on the road of up to 40 minutes, and sometimes hill sprints. Lenise says that while she does enjoy running, it doesn’t always feel right… “I’m used to running with a stick in my hand, so it feels a bit strange to run without one.”

Lenise actually hails from a Durban family with a rich running background. Her uncle, Keith Gunkel, ran the Comrades 13 times to earn Green Number 2090 and the family would go out on the route to support him. “We did the skottel brekkie thing and then stayed the whole day to support the runners, giving them water and flat Coke. Maybe I’ll run Comrades one day, but I’ve heard that it’s better after you’ve had kids, so it will be really later on in life. And I’ll need an iPod with a thousand songs on it to get me going!”

THROUGH THE RANKS
Lenise started playing hockey while at school. “I started off as a striker for the under-11s and scored four goals in my first game, so I was happy.” Although later moved back into defence, her talent saw her playing under-13 while still an under-11. When she got to high school, she was already playing first team when still in standard seven, and made the senior KwaZulu-Natal squad in her matric year for the 2002 Interprovincial Tournament (IPT). The following year she began her studies at Stellenbosch University (Maties) and her seven years in the Cape coincided with a trophy-laden period for both Maties and Western Province.

In 2004 she was selected for the SA under-21s, and in 2005 made her debut for the seniors, against England in Potchefstroom. “It was a settled, established team, so it was difficult to break in. Also, we often played teams ranked higher than us, so sometimes it was hard,” says Lenise. “But we’ve done well in a few tournaments, twice finishing second at the Champs Challenge, so the team realises it can take the next step and we need to do well this year in the World Cup and Commonwealth Games.”

At the time of writing, Lenise had 107 caps (and one goal) to her name, and had played in the Olympics, Commonwealth Games, World Cup, Champions Challenge and African Cup of Nations. She says her fondest memory is when she played her 100th game. “I got to lead the team out and then stood next to the captain, Marcia Marescia, when we sang the anthem. Only the captain knows this, but I couldn’t sing because I had a little bit of a cry.”

FUTURE PLANS
This year Lenise begins her working career, having completed her BA Sports Science, BA Hon English and PGCE (teaching diploma) studies at Stellenbosch. “I’m heading home to start teaching this year, at Durban Girls’ High School. It’s a straight PE teacher post, but I could be given a few English classes later. I’m okay with that – it eases me into teaching.”

She says she intends playing hockey for a while still. “It’s all about keeping your body healthy and strong. The fitter you are, the less likely you are to get injured. And hopefully we’ll get the green light from SASCOC to go to the 2012 London Olympics.”

“I’d also like to do a multiple country holiday down the line, with three weeks in India, then three weeks in Taiwan and Hong Kong. I want to have time to really look around. And I only want to travel with one bag, because I haven’t travelled without a stick bag in ages!”