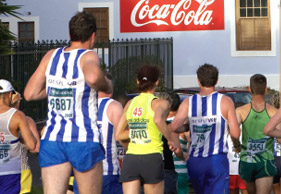 Cape Town is known for its scenic races, with ocean and mountain views all around, but the Landmarks Half Marathon offers something more – a running tour that takes in some of the most famous landmarks of the Mother City.

Cool, overcast conditions greeted a record fi eld of close to 4 000 participants in the 2009 Landmarks Half Marathon and 6km fun run/walk, organised by the Western Province Cricket Club running section.

The 6km fun/run walk incorporated a Schools Challenge, which offered prize money sponsored by ADT totalling R20 000 for the four schools with the highest percentage of finishers. The fun run/walk attracted a fi eld of 2 000 participants, including over 1 000 schoolchildren from all over Cape Town. The City of Cape Town, in partnership with the event and the JAG Sports and Education Foundation, provided  transport for around 600 children to encourage them to take an active role in sports events.