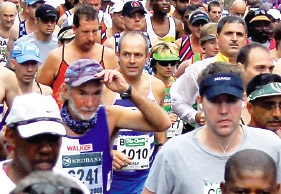 This race gets bigger and better each year. The Dis-Chem Half Marathon, hosted by Bedfordview Country Club, is not only known as Gauteng’s Premier Half Marathon but is also renowned for its excellent organisation. And this year was no different. The race attracted more than 5 000 athletes, many of them eager to test their fitness levels at the start of a new year. A highlight of the race was the many elite runners it attracted, such as Olympic athlete, Juan van Deventer, and George Mofokeng, 2:13:50 marathoner.

This year the ChampionChip-timed event saw the implementation of a seeded start which not only turned out to be a success, but also eased the usual tension between runners and walkers at the start of a race. For some the 2010 race was a day of personal bests and for others an eye opener as to what lies ahead. Many just had fun. Three runners share their experience of race day with Modern Athlete.

From the moment the race started, I did not want to be left behind by the elite group, most of them running an average pace of 3:00min/km. The leading pack included George Mofokeng, Johannes Kekana, Lucky Mohale and Juan Van Deventer.

We went through the 5km mark in 15 minutes. From start to fi nish Juan showed his hunger to win by staying with the leading group for most of the race. It was only in the last 5km that he started surging. Lucky challenged him continuously but eventually had to settle for second position.

Just after the 8km mark I was the fi rst victim of the hard pace George set earlier. I could see the frontrunners opening a gap. The route was getting tougher. I pushed harder but it was not my day.

I finished 11th but because the tenth runner did not have a chip, I was officially listed as the tenth finisher. It was great to see my Nedbank team mate, Juan, winning the race.

The new route was testing with some long gradual hills, but it was well-balanced. Well done to the organisers of the race! I enjoyed the race, but it was a sad day for me as George Koertzen, well-known race commentator, had passed away the day before. We will surely miss him and his big dogs that were
always with him. He was my mentor and helped me on my way to becoming a sports journalist. George, may you rest in peace.

The 2010 Rehidrat 5km Dash saw athletes from all walks of life gathering at the starting line, preparing themselves for 5km of beautiful Bedfordview terrain. Perusing the crowds revealed not only the usual running shoes and visors, but also those runners and walkers who had something a little special.

As I scanned the faces of moms and dads with jogging prams, I caught glimpses of those athletes hunched down to talk to their kids, brave five, six and seven-year-olds who, like me, were committed to finishing the race. Fancy running shoes stood side close look, I spotted a man who, despite only having one leg, was gunning himself up to finish the race on crutches.

And so we took off; I had run this route before and knew that a small stint up Riley Road would take a turn onto the dreaded Townsend Road. I started to repeat my hill mantra: “You’re nearly at the top, you’re nearly at the top.” Luckily, the route veered off ‘Heartbreak Hill’, taking us on a path of flat roads with only a few short uphills. I was thrilled that my fear of uphills would not be realised.

A long downhill led us back onto Riley Road, for the final kilometre back to the field. I knew that this would not be an easy race for me. Getting away from the crowds at the beginning had left me tired and out of breath, but the combination of an easy route, cool weather and friendly marshals made the race one that I, and all the participants, will remember fondly for the year to come.

I did some things wrong. There is nothing like the hard way to learn a lesson. I have in fact spent my life trying to be more efficient. I continuously try to challenge myself to work smarter. I guess that’s what gradually led me to running. It makes sense to go for a one-hour run and get the workout over and done.

You see, canoeing takes half a day and you end up with piles of wet gear to dry and pack away. Cycling takes a two or three-hour ride to make you feel as broken as a one-hour run. Anyway, a while ago I joined a club and started running in the mornings, pulling off epic heart rates in just one hour.

Then the emails went around, stating that the Dis-Chem Half Marathon was the first race to get under your belt in the build-up to the big race at the end of May… My wife and I entered online. I was impressed by how easy it was. We picked up our fat goodie bags; bigger than any cycling or canoeing goodie bag, except for the Dusi Canoe Marathon goodie bag which includes a six-pack of Hansa.

The Dis-Chem race was very well organised. The route was great and our race numbers had our names on them – very cool. Whenever I was thirsty, there was a well-stocked drinks table. The thing I enjoyed the most was the encouragement I got from all the marshals as well as the rivalry between the different clubs.

I must admit I found myself with a good amount of time to think while running and one thing I realised was that I could actually run, but that I should really have taken the day before the race more seriously. You see, the day before, I had been running around with canoes and lifejackets, paddling and messing about on the banks of the Vaal River.

Yip, that’s where the race day pain was coming from. At the start I was a bit dehydrated, a little sunburnt and my arms were tired and stiff. Had there not been people all around me I could well have given up. But what type of a Modern Athlete would I be if I bailed on my first half marathon at the start line? So as some would say, I hardened up and ran!

I finished in 2:51. Thank you to the race organisers and sponsors for a great event. My biggest lesson was the realisation that the day before race day is a very important one… In future I won’t be messing around on rivers the day before, and sorry sweetie, but no DIY the day before either.