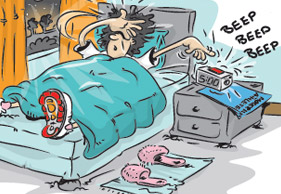 One of the biggest problems with learning a new skill is that nothing seems to happen quickly enough. As an emerging runner, I often hear myself complaining that my legs aren’t getting strong quickly enough and that my stamina isn’t building quickly enough. I have made progress though and now have the experience of another race under my belt, as well as having joined a running club, a real first for the girl who thought she could do it all on her own.

My story begins at the end, or the end of my last article at least. It was after writing my last article that I began to think about myself in a different way. The challenge that I had set out was beginning to snowball and I was starting to feel the pressure to actually accomplish what I had said I would. Without a coach, a running programme or even a friend to motivate me, my wellintentioned plan was starting to dissolve.

And so, I set out to achieve two things. The first was to run The Citizen Gerald Fox Memorial Run around the zoo. This would be my fi rst 10km run. As race day crept nearer, I began to panic. How on earth was I going to accomplish this? Luckily for me, all the resources were in place at the Modern Athlete office for me to get the advice I needed.

I approached one of our experts, Hilton Hort, for advice. Hilton started his running career later in life (a little like me actually) but had done amazing things and clocked amazing times since he fi rst hit the road. With his years of experience, I knew he was the right person to ask. His advice to me was amazingly simple. “Run two, walk one.” It was that easy. All I had to do was break the race up into manageable chunks.

On the morning of race day, I drove to the Johannesburg Zoo feeling calm, repeating my goal to myself. All I had to do was finish. Once I had gathered my race pack and t-shirt, I trotted off to the start, full of Sunday morning enthusiasm. The air at that start line was electric. People were milling around each other like worker bees, dressed in their club colours, some with earphones already plugged in and pumping, others laughing with friends and me, soaking it all in.

Suddenly, the race had begun. We were off. And then the funniest thing happened. I had been focusing so intently on my new strategy, breaking the race up into running parts and walking parts, that before I knew it, 2km had passed. As I looked down and saw the painted ‘2km’ on the tar, I started to feel really confident.

Hilton’s strategy was working. The route was spectacular, encompassing lots of flat roads and downhills (great for a beginner) and not too many uphills. The big and beautiful houses of Houghton made for a welcome distraction en route and my iPod, programmed with the most upbeat songs I could fi nd, kept me focused on putting one foot in front of the other. The end was in sight. I crossed the finish line, a little sore, a little chafed and more than a little relieved. 10km was behind me. Mentally, I began to calculate. The difference between my very fi rst race and my second was huge. I had gone from 10.3 minutes per kilometre to 8.9 minutes per kilometre, and that over a longer distance. To reach my ultimate goal, I would need to run each kilometre in 5.2 minutes. I still had quite a long way to go, but when I looked at where I had come from, I began to believe that I could achieve it.

Thus came the second thing I had set out to achieve. I needed help with my running and without joining a club or paying a personal coach, it was never going to happen. Since paying a coach was out of the question, my second option was joining a club for their morning runs. The prospect of early morning exercise loomed before me and every time I thought about it, I groaned. And yet, I could see no other way to get my fitness building back on track.

That first morning was the worst. My alarm going off was as enjoyable as what I imagine being trapped under a walrus must be. But, in the back of my mind, I knew there were people waiting for me. And so, I dragged on my tracksuit pants, fastened my hair back and, bleary-eyed and bad-tempered, made my way to the club. I had decided to start out with the walkers, as I was certain I couldn’t hold my own with one of the running groups.

As we began our walk, I began, as I usually do, to chat away happily to my friend and fellow walker.  After 20 minutes of this nonstop diatribe, our leader turned around and, jokingly, asked if I ever stopped talking. I laughed and replied, “They don’t call me Little Miss Chatterbox for nothing!” “That’s okay,” he smiled, “Let’s see if you’re still talking in a few kilometres.” We decided to intersperse our walk with  some running and by the end, I was breathing hard and red in the face. I was certainly not so chatty anymore.

Although it’s only been a few weeks, I’m still getting up bright and early for those walks. I even tried a run last week (which I discovered, I am defi nitely not ready for) and strangely, I’ve even begun to look forward to them. The feeling of achievement you get after you complete your exercise for the day is  empowering and has left me with the feeling that, as the song says, ‘things can only get better.’