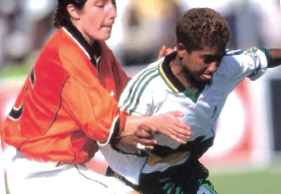 Running plays a large part in almost every sport practiced at a competitive level. We explore running’s role in soccer by speaking to former Banyana Banyana captain Desiree Ellis. She may be retired, but this 2010 World Cup Ambassador is still running strong.

Women’s soccer is still way behind the men’s game in terms of public recognition and support, but it is steadily getting bigger, with an established national club competition and the national team, Banyana Banyana, challenging for international honours. Desiree Ellis took a leading role as a player in building the women’s game to this level, and continues to do so, both on-fi eld and off.

Des was already playing for the unoffi cial national team in the 80s; then in 1992 she was made vice-captain as the country returned to international action, scoring a hat trick on debut against Swaziland. A year later she was made captain and retained the position until 2002, leading the team to the runnerup position in the 2000 Africa Cup of Nations and then the team’s first silverware, the 2002 COSAFA Cup.

Today, at the age of 46, she is still registered as a player with her club, Cape Town Spurs, where she coaches a talented team that regularly challenges for provincial and national honours. From time to time, if the youngsters aren’t doing what she wants them to do, she puts herself on the field for the last ten to 15 minutes and shows them how to make that killer pass for the strikers to run onto, a trademark of her game. And she can still play thanks to her superb fitness, another trademark of her game.

FITNESS FIRST
Soccer players usually hate pre-season training, because they don’t really like running, says Des. “It is the worst! I remember we would come from off-season to do long road runs – you just run and run and run. The players moaned, but we did it anyway, because we knew it would benefi t us on the field.”

By her own admission, Des was never the quickest player, but she made up for it by being the fi ttest and sharpest player on the park. “I had to think, had to predict, had to read the game – that made me look quick! I worked on my strength, power and endurance, because I had to have something else instead of speed.”

This made her ideal for the central midfi eld holding role that is essential to the success of any soccer team. “I played there because I had a ‘head’ on my shoulders and knew when to go forward and when to hold. I would have scored more goals if I had played more attacking, but we had good, fast strikers – and when you have strikers like that making the runs, you keep it simple and just give them the ball.”

RUNNING AROUND
Des still runs, cycles and gyms to keep fi t, which has really helped her in another passion: for the past eight years she has been part of the annual Sports Heroes Walk against Aids. This year they visited Limpopo Province, with runners Ruben Ramolefi , Evelina Tshabalala and Willi Mtolo included in the team of eight runners (Josia Thugwane and Zithulele Sinque also participated in previous years).

“We run from town to town and try to bring across the message about leading a healthy lifestyle. We did 1 751km this year in 18 days, and handed out R300 000 to three hospices. I did ten kays per day, but the runners would do up to 25km. We run or walk at the same time, each one running their allocated portion of the route and then being picked up by a vehicle, and we aim to get the running done between 5am and 7am, then arrive in town to meet the local community.”

“The first week is the hardest. Your legs are sore, you can’t move, but it gets easier later. Most importantly, I feel we are making a difference. The kids have seen the sports stars on TV, they want to meet them, and they listen to them. People have come out to be tested thanks to our walks.”

AMBASSADORIAL
Des is currently working as a 2010 World Cup Ambassador, helping to promote the tournament. She’s part of a star-studded line-up, including former Bafana Bafana legends Lucas Radebe, Mark Fish, Phil Masinga and Doctor Khumalo. It is a measure of how highly Des is regarded in the game that she has been included in this list of greats.

After attending the recent World Cup draw in Cape Town, Des says it was a great show but a pretty tough draw for South Africa. “What counts in our favour is that Uruguay and Mexico play the same kind of football, so at least we don’t have to prepare three different game plans. Our coach knows these teams well, and he says we will go through. Also, if the people of South Africa can repeat the passion of 1995 and 1996, we can help the players.”