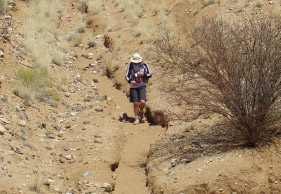 The Kalahari Augrabies Extreme Marathon (KAEM) is a 237km race over six stages in seven days. This year saw the biggest field in the event’s ten year history, with 73 participants from 12 countries lining up. And leading them home was South African race winner Dirk Cloete, of Irene Road Running Club. He told Modern Athlete all about his experience.

Experienced desert runners will tell you that the KAEM is infamous for its harsh terrain. It is a self-sufficiency foot race; competitors carry all their own supplies for the duration of the race. The organisers only supply water, fire and toilet paper.

The KAEM is a tough and expensive event, and I prepared well for it. Did I go out to win? I just wanted to do the best I could, and if I happened to be the fastest man I would be grateful. I was fortunate that one of South Africa’s most recognised trail runners, Bruce Arnett, also entered. He has won it twice, and it was an opportunity to measure myself against the best.

Day one was a nice ‘loosener’ of 28km. Over the first few kilometres, runners were clearly finding their pace and rhythm, some trying to fi nd a running partner. My backpack weighed more than 14kg and was much heavier than what I was hoping for. Bruce and I ran together and fi nished the fi rst stage at an average pace of 5:25min/km. It was more than a minute per kilometre faster than ever in the past for the fi rst stage and the talk that night was that ‘we were much too fast’ for the KAEM.

I am an experienced road runner and knew I could pace myself well. I planned to run the KAEM at a pace which I knew was safe, regardless of how much faster or slower it was than in previous races. Day two was a longer stage (34km). It was hot with quite a technical section to negotiate. Relaxing at the camp that night, a group of residents from Riemvasmaak protested against our overnight camp and we had to evacuate. Just after midnight, we set up at a new camp. I found it diffi cult to sleep; somehow only the experienced snorers fell asleep easily!

NEW ROUTE
Due to the trouble the previous night, the organisers had to mark a new route before the start of stage three. We eventually all started together on a shortened 20km run. Bruce and I decided to take it easy in anticipation of the long stage on day four. Rhodri Darch (from Wales) broke away from the group early on and after 14km, he was almost two minutes ahead of us. We started sprinting at a crazy pace of about 4min/km and with 1km to go, we caught Rhodri! We all had a good laugh and jogged home together.

Day four was the big one with 82.3km ahead of us. I had my plan worked out and took it easy. Bruce and I covered the first 10.5km over easy terrain to the fi rst checkpoint in an average pace of about 5:20min/km. In previous races, a pace like that was considered suicidal, as the race has always been won in an average pace of 7:30min/km and slower.

For most of the way, Bruce and I worked together. I left the 61km checkpoint ahead of Bruce, but I was pushing hard and the last 7km were challenging. It was pitch dark and hard to distinguish the quality of the road surface. I fi nished the stage in a time of 8:16. Bruce got home 20 minutes later in a time much faster than in previous races. By now it was clear that the KAEM 2009 would be won in a much faster time than ever before.

JUST WANT TO RUN
Day fi ve was reserved for a well-deserved rest, but I don’t know what was worse: running for an entire day or lazing around to kill the hours. The medical team spent a lot of time helping with injuries, especially blisters. The second-last stage on the sixth day was the most technical stage of the entire race. I fi nished in a time of 4:21 and extended my lead to 26 minutes.

On the last day, the organisers tried to get everybody in before the winner arrived. The fi rst group left at 5:30 on our last 25km journey. Bruce, Rhodri and I set off at 10:15. We decided to run together, but at a steady pace, as I wanted to see how close to 22 hours I could fi nish. With 11km to go, I took off. I was singing aloud with the music on my iPod, probably scaring the animals away! Maybe that’s why the
camera man stayed with me; he was not taking pictures, he was monitoring my mental health.

MOIST EYES
As I finished, I got very emotional, but I believe one should enjoy it when things go your way. I’d worked hard and it was my moment to enjoy. You do this type of event not for yourself, but for everyone in your support team. My sponsors, SCE Automation Solutions, made it fi nancially possible for me to enter. I also had one of the best sport scientists, Prof. Jacques Rossouw, helping me with the physical, nutritional and mental preparation. I am forever grateful to my wife, Lynda and little boy, Damian, who supported and encouraged me through all the long hours of training. And then there was the incredible care and support of all the members of my running club, Irene. But above all I thank my Heavenly Father for the privilege to have  been part of the 2009 KAEM.

Winning or just completing such an event is a unique blessing, and one should enjoy every moment of it, as it passes so quickly and becomes only a precious memory. On my journey, I met the most incredible people. To fi nish is a major achievement regardless of the time it takes you. Congratulations to all my fellow competitors who fi nished the race!