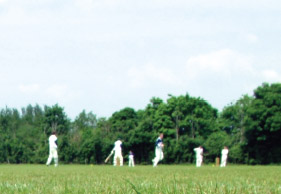 Top cricket players are hardly ever at home. They are continuously travelling all over South Africa and internationally, training and playing the sport they love and are so good at. To become a competitive cricketer demands dedication and extreme fi tness. Cricket is not a continuous steady state sport and often the game demands a mix of endurance as well as short and fast sprints when batting and chasing down a ball. Cricket players are also on their feet for most of the day; not to mention all the strength movements such as leaping, jumping and turning they perform while trying to catch a ball. Scotland’s
cricket coach, Andy Moles, recently summed up the fitness required from top cricket players when he said that players have to become fi t to play cricket rather than getting fit by playing cricket. Increased base fi tness is essential if they want to do themselves justice at the current ICC Champions Trophy,
Moles said.

Gone are the days where cricketers could get by with a good eye for a ball and a well-balanced drinking arm. A lot of the olden day legends, in particular the top order batsmen, never really reached peak fi tness. The likes of Eddie Barlow, Graeme Pollock, Mike Gatting and David Boon may have had a few disagreements with current day ‘fi tness coaches’. Bob Woolmer and Hansie Cronje were probably the pioneers in the fitness trend for our national side, a trend that has intensifi ed in the modern day game. These days, if you’re not quick between the wickets in a one day or Twenty20, the opposition immediately identify the weakness and they will pepper the stumps you are running towards. With the help of TV technology, you only have to be an inch short and you’re OUT!

AB, who plays for the SA Titans, the Delhi Daredevils in the Indian Premier League and for South Africa, knows all about base fi tness and says he uses running to achieve it. His prowess on the fi eld made him the natural successor to Jonty Rhodes and he must be classed as one of the best fi elders currently on the international circuit. He takes fi tness very seriously and his fitness programme includes a lot of running. “Running fi ts in everywhere. Whether we’re playing games, practicing on the field or exercising in the gym, running plays a huge role in all of it,” says AB. He follows two different fitness programmes, depending on the time of the season. Pre-season training is a lot more physical than in-season training. Pre-season, he trains fi ve to six days a week. It normally consists of four cardio sessions (two fat burner runs and two high intensity fitness runs), three strength sessions (each player follows a specifi c programme worked out by their fitness trainer, Rob Walter) and four stability sessions (six to eight core stability exercises specific to the individual).

“Our runs are normally no longer than 12km, but I love running! So I make time for longer runs. I did the Knysna Oyster Festival Half Marathon. It was awesome. I’m a bit shy to share it with everyone but I did it in 1:40. It was my fi rst 21km.” These types of longer runs and consistent running have helped his cricket. “Cricket is mostly about mental strength and endurance, and running has helped me a lot with both!”

AB, an attacking top order batsman, has been active all his life. All the sports he has played up until now have involved a lot of running. One of the reasons he absolutely loves to run today, is that it makes him feel ‘fresh, fi t, healthy’ and good about himself. He has never been very unfi t; he remembers his first year after Matric when he was not as active as he had been at school. He quickly got a wake up call and started training and has stuck with it ever since.

Long distance running and the training it involves have been part of AB’s upbringing. His parents, have both run the Comrades Marathon! “Comrades looks like quite a challenge. I have absolute respect for the thousands that partake. They are legends. I just think 21km runs will suit me better. At least for now,” says the 25-year-old AB. Don’t be surprised to see him line up at the start one day. It seems
like the running bug is in his genes, like it or not.

AB believes that his family, combined with a lot of hard work and his faith, have made him the cricket player he is today. His sporting goals include pushing himself to higher levels and to become even fi tter and healthier. He is also a budding musician and released his fi rst single, “Show Them Who You Are” a while ago. A complete rock album is on its way. “I grew up loving sport and will always love sport but I do realise there is more to life. It’s all about fi nding the right balance.”