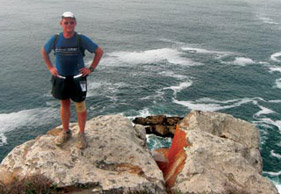 He bought a brand new car, big and comfortable enough to sleep in before races. He spent hours planning which races to run where. He even forked out thousands of rands travelling overseas to find races so he could clock up as many kilometres as possible, all the time meticulously logging each and every kilometre. Brian Marshall was a man on a mission; a man who walked 3 759.7km in races in 12 months – and became the first walker ever to beat runners in the 500/1 000km Challenge. Modern Athlete spoke to Brian about walking, winning and that unspoken rivalry between walkers and runners.

THE CHALLENGE
The 500/1 000km Challenge is a well-known competition to most mileage junkies on South African roads; run or walk a cumulative distance of 500km or 1 000km in official road races in one year (the Challenge starts one day after Comrades and runs right up to Comrades the following year), and when you hit your target, you qualify for a Challenge medal. Though the distance initially sounds quite daunting, most committed runners and walkers can easily clock up the kilometres by doing what they love on weekends; running or walking official races.

As with every competition, the 500/1 000km Challenge is known for its group of competitive and committed runners and walkers who, each and every year, try and log as many kilometres as is humanly possible. And in the process, things start becoming very secretive; competitors don’t share their planned races with each other, some travel to all corners of the country to find races and if it means doing three races on a weekend, what a bonus! Some more fortunate ones even hop on a plane to log more kilometres in races abroad. All the time they keep an eye on each other’s whereabouts. If they don’t see each other at races, many get worried because that might mean that the other person has found a longer race somewhere else.

Being a top contender in the Challenge takes a lot of planning, commitment and a fierce will to come out tops. And that is exactly what Brian did. He logged nearly four times the required distance (1 000km) and was 443.7km ahead of his closest competitor, runner, Stuart Wainwright. Brian was also way ahead of the second walker, Tony Green, who completed a credible 1 884.87km. Though runners and walkers log the same amount of kilometres when they compete in the same road races, it’s a whole different story at circuit races. Runners have the advantage of clocking more kilometres in the required time as they cover more ground.

“When you are a walker, you don’t have time to take a rest when walking a 100 miler. You have to keep on going. Sometimes it is hard for walkers to do long distance races as they don’t always make the cut off times. I have an advantage because I come from a long distance running background,” says Brian, who three years ago changed from running to walking because of back and knee problems.

HOW IT ALL STARTED
Brian started running in 1985, though he lived a life of too many drinks and cigarettes. “I was an alcoholic and smoked way too much. I have a drunken driving charge against me and have written off a couple of cars while driving under the influence. I knew I had to stop, but I just never found a way,” says Brian. Every year, he watched Bruce Fordyce running Comrades and every time he swore to run the race.

“One day my wife Brenda said I would never do it. I wanted to prove something so I started running,” says Brian. He did not take things slowly. His first run was on 1 January 1985 and a couple of weeks later, he ran 15km at the Varsity Kudus race in Johannesburg. Not long afterwards, he finished the Johnson Crane Marathon in a time of 4:17. Brian admits to having a compulsive nature. “When I drank, I drank; when I smoked, I smoked and when I ran, I ran.”

He went ahead to run 14 Comrades; his slowest time was 11:27 and his fastest time was 9:26. But alcohol and cigarettes still played a role for most of his running career. He eventually gave up drinking on 15 November 1994. “I am not ashamed of people knowing that I was an alcoholic. I told everyone at work about it and everyone at my running club. There is no way I will ever drink again. I am now a stronger person.” But letting go of cigarettes was not easy. Brian smoked for the biggest part of his running career. “During one Comrades, I smoked 14 cigarettes. I used to light a cigarette at the bottom of each major hill. Believe it or not, there were so many runners asking me for a cigarette.” Today, he regrets abusing his body in this way, but says you can only let go of an addiction when you are really committed. “Only when my mind was right, did I let go.”

NO MORE RUNNING
Brian eventually gave up smoking in 2000, because he wanted to run the Western States 100 mile race in the mountains of California in 2002. He knew he could never run it as a smoker. Though he didn’t finish the race because of flu, he was at least rid of a bad habit. In 2005, on his third try, he finished the race, an achievement he still sees as a highlight in his running career. But by the end of 2005, Brian’s running days were coming to an end. His last running race was in 2006 and he was forced to stop because of back and knee problems. “My back was so bad that it took me 20 minutes to get up after lying on the floor.” Giving up sport altogether was never an option and Brian took to walking, proudly and passionately sporting the big W on his running vest.

CHASING THE MILAGE
It has been three years since he started walking and as usual, he does nothing half heartedly. He has entered the Challenge a couple of times and made it his goal to win it this year. As a walker, it meant he had to go the extra mile to clock up more mileage than the front runners. Brian studied the racing calendar and picked races in provinces where he could accumulate the most mileage. This sometimes meant a lot of travelling; he would drive to a province on a Friday night, sleep in his car, run on the Saturday morning, drive to an afternoon race if he could find one, drive back to Johannesburg the same day and compete in a Sunday morning race. “I once did 240km in eight races in nine days,” says Brian. He has also done three 100 miler (160km) races in three months; the Washie 100 miler, the Cape Town 100 miler and the Ultimate 100 miler. And only a week after the last 100 miler, he walked another 100km at a 24 hour race in Mpumalanga, all the time keeping an eye on his closest competitors.

“At races, I always checked to see who was there. I tried to make it my mission to know who was doing how much mileage. But we kept secrets from each other. When someone asked me how much mileage I had logged, I conveniently forgot a couple of hundred kilometres,” says Brian. He walked Comrades this year but did not finish. “You have to walk 7.8min/km. It’s not easy. I got to the 73km mark and realised I would not make the cut off, but would finish in about 12:10. I decided to stop, especially because the athletes who don’t make the cut off, are not allowed into the stadium.”

Just before Comrades, he flew to New York to take part in a 5/10 day Circuit Race held from 22 April to 2 May in Flushing Meadows, Queens, but not before asking his closest competitor if he was also going to run the race. “If he was going, I would cancel my race because I knew I could not clock up more kilometres if he ran the race,” says Brian. He completed 701km in ten days on a one mile route, placing second in his age category (50-59). Walking the same circuit over and over again didn’t bother Brian. “I am a draftsman and do calculations all the time. From the moment I started walking, my mind calculated how far I had gone and at what pace.” Brian was elated when he won the 1 000km Challenge, but admits he was already looking for a new challenge by then. “It’s about the journey and not the destination. The most exciting part of it all is the preparation for the races.”

RUNNERS VS WALKERS
He admits he looked down on walkers when he was still running. “Runners sometimes disregard walkers. I also did it when I was a runner. I am so happy I won this challenge; I did it for the walkers out there.” He sometimes experiences animosity between runners and walkers at races, especially when walkers insist on starting the race right at the front. “When you speak to walkers, they all tell you they have just as much right to start in front as the runners. I agree, but then one should stand to the right and not start as a group. The ideal situation of course would be separate starts for walkers and runners.” One thing that gets Brian’s blood boiling is when walkers mix a bit of running with their walking. “It gives all walkers a bad name.” His future goal is to walk all the races that he ran as a runner. “I could never stop walking. Even if I end up a cripple, I will race in a wheelchair. You have to do something; otherwise you might as well lie down and die.”