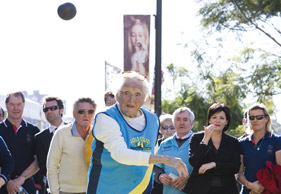 Few of us ever reach the age of 100. In fact, most folks can’t even imagine making it to 90, and if they do, the last thing on their minds would be exercise. The next time you feel old and ready to hang up your sweat towel, you may want to consider a 99-year-old Australian great-grandmother called Ruth Frith, the oldest competitor in the upcoming Sydney 2009 World Masters Games.

Ruth trains six times a week and believes that everybody has to try their best. To this golden girl, it’s not about winning events, but about being brave enough to enter and compete, no matter what your age. This is the inspirational story of a granny to whom age is just a number. Modern Athlete spoke to Ruth, hoping to learn some of her secrets to staying healthy and young at heart.

She was always on the sidelines of the athletics field, a proud mother watching and encouraging her daughter to compete. While watching, athletes she had known for many years would dump their sport bags at her side, and she would be the designated guard, keeping an eye on the bags while they competed. Until one day. Ruth, then 74, had had enough. “If they can do it, I can too,” she told herself. That was in 1983, the start of Ruth’s long and glorious athletics career. Today she is the holder of five world records in the women’s 95-99 age category, that is, in the discus throw (9.85m), hammer throw (11.37m), shot put (4.72m), weight throw (5.11m) and weight pentathlon (5 544 points).

This Brisbane great-grandmother, who will turn 100 on 23 August, represents the Gold Coast Masters Athletics Club in competitions all over Australia. She has become the first centenarian to sign up for the Sydney 2009 World Masters Games, the world’s largest multi-sport event. This event is open to sportspeople of all abilities and most ages; anyone can compete as long as they satisfy their sports’ minimum age, which ranges between 25 and 35. The Games, held between 10 and 18 October, will see 25 000 people from more than 100 countries compete in 28 sports at more than 70 venues throughout Sydney, including many Olympic sites.

Ruth, who has been competing in Masters Athletics for 25 years, says she couldn’t wait to sign up for the Games. Turning 100 soon is no big deal to this proud grandmother of six grandchildren, nine great-grandchildren and two great, great-grandchildren. “To me, birthdays are all the same. I have never looked at it thinking that I’m getting old. It’s just another year gone by.” She is certainly not like any centenarian we could have imagined. Her voice is clear and her sense of humour is as sharp as that of a 30-year-old. She enjoys telling how she was charmed by South Africa on her visits in 1992 and 1997, and how much she loves the country.

She has outlived her husband, Raymond, who made it to the ripe old age of 97. The couple lived in Sydney, but when Raymond passed away after kidney failure, Ruth moved to Brisbane to live with her daughter and coach, Helen Searle. Her mother’s love of sport must be genetic, because 68-year-old Helen is also a world record-breaking athlete. She competed at the 1960 Rome Olympics and in 1964 in Tokyo. She won a bronze medal in high jump at the 1958 British Empire and Commonwealth Games in Cardiff and a silver in high jump and long jump at the same Games held in 1962 in Perth. Mom and daughter will both compete at the Sydney 2009 World Masters Games.

Ruth, an athletics official at the shot put and discus events from 1960 to 2001, says that everyone is born with a gift of some sort. Her father was a good runner and she believes his gift was passed on to her. As a 10-year-old girl, she ran everywhere. She has participated in some sort of exercise throughout her life. She wanted to be a doctor, but unfortunately mathematics at school wasn’t her strongest subject. She eventually worked in admin in a solicitor’s office until she got married.

“I don’t think I have secrets to staying young. I am just blessed with good health. I don’t believe in diets and all that nonsense, because if you exercise, you don’t need to diet. Surprisingly, I don’t eat vegetables and potatoes, but I do like fruit.” She says she has a sweet tooth, but gets tired of all the chocolates she receives. “People don’t know what to give a 99-year-old, so I always end up with chocolates. I got nine boxes of chocolates last Christmas. I didn’t know what to do with them. My favourite treat is sponge cake with plenty of cream.” She loves cooking and gardening, but finds it difficult because her eyes are degenerating, leaving her half blind. When she competes, it’s in a category for athletes who can see a metre away. This has not kept her from giving it her all. “You put up with what you have. I have lived 99 years with red hair and freckles, and if you can do that, you can live with anything.”

Ruth trains six times a week. On three of those days, she will train 90 minutes per day in shot put, hammer throw and the other events she competes in. On the other three days, she starts off her training by cycling on a stationary bike for ten minutes and then does light weights in her sunroom.

Ruth’s life motto is to stay true to herself. She believes if you can’t do that, you can’t be true to anybody else. She loves athletics and wherever she goes, she motivates people to go out there and try. “Just the other day, I said to a lot of elderly people that even if you have grey hair and creaky knees, it shouldn’t stop you from exercising. Nobody is expecting you to be an Olympian, just do your best. I know for certain even if you are beaten, the sun will rise the next day. There is no disgrace in being second.” Ruth competes in tracksuit pants or shorts and wears her club vest proudly. But there was a time when she didn’t like wearing shorts. “Women didn’t even wear slacks in those days and most officials were men, so to go out there in a pair of shorts was like not wearing clothes at all.”

“I love training. I have always said that the day I don’t want to train, will be the day I give it up. I will be lost without sport in my life. If it gets taken away from me, it will be like taking my life away.” She’s looking forward to the Games, especially her favourite event which is hammer throw. One thing is certain: Ruth Frith is guaranteed to break records. “Whatever I do at the age of 100 will be a record. My goal is just to go out there and do the best I can.”