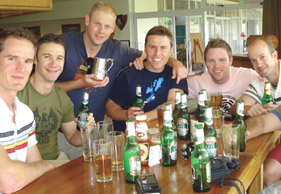 Filipe Da Lomba, Fil to his friends, is a 32-year-old planning analyst at Anglo Platinum, with a degree in accounting from Johannesburg University. All of Fil’s friends say that he is not the man he once was, physically that is. Fil now looks half the size he used to. He recently lost 21kg, which he attributes directly to his running goals for 2009. He is a great character and his success is an inspiration to many. Modern Athlete had the privilege of chatting to Fil to gain some insight into how big his dreams were and how he managed to achieve them.

How long have you been running?
I have been running on and off since 2003, but never took it very seriously. I ran the Two Oceans in 2003, 2004 and 2005 but then went into hibernation until September last year.

How much did you weigh when you came back to running and how much do you weigh now?
The day I started in September 2008, I weighed 89kg, not a pretty sight for someone who is only 1.64m tall. When I lined up at Comrades this year, I weighed 68kg. I lost a total of 21kg.

What inspired you to change your life this way?
After running the Two Oceans in 2005, I promised myself that I would only run again if I lost weight and was in good shape. In 2008, I went down to Two Oceans as a spectator and saw all my mates run, which made me realise how much I missed running. So, I decided I wanted to do it again, but I knew I had to lose the weight. To be honest, I think I was also tired of my lifestyle, so when the club started training in September, I joined them and took action.

How did you do it?
I started running five to six days a week at the running club. I made a conscious effort to run in a school that was at a level higher than I had previously run. I knew that if I merely plodded along at a comfortable pace, I was not going to achieve much. It was pretty tough going at the beginning and I was the last man home on many occasions, but by being consistent and not missing runs, I quickly improved and was able to run with the school. I also set myself an ultimate goal weight and target weights that I wanted to achieve at the start of each race in the build up to Comrades.

How long did it take you to reach your goal weight?
It took around eight months to reach my goal of 68kg.

Did you use a dietician?
No, but I did attend a talk in which one of the speakers, Cara Humphreys, made a lot of sense to me and confirmed that I was on the right track in terms of not going on any crazy diets. She was adamant that the body needs all food groups to be healthy and to perform at its best.

What were the key changes to your eating habits?
The change to my eating habits was not in what I ate but in how much I ate. I looked at what I ate and at what other people ate and what became very apparent was that most of us don’t eat that badly. It’s not like I was having a hamburger every day. What I was doing was eating too much. My portion sizes were far too big. I changed this by trying to have a carb and protein at every meal, while remaining conscious of the amount I ate. Today, a smaller portion has become the norm. Next time you go to a restaurant, look at what they serve you and ask yourself, do I really need to eat all of that? We live in a world of excess; everything needs to be bigger, faster. Food has followed the exact same trend and many of us just consume what is put in front of us without even thinking.

I have become passionate about correct eating habits. I don’t believe in diets where you eat this and don’t eat that (such as the no-carb diet). You cannot sustain a diet like that forever and once you stop, the weight comes back.

What were the key changes in your training habits?
I added in some quality workouts i.e. speed sessions and hill work. I am now a firm believer that in order to improve, these workouts are crucial and that you have to take yourself outside your comfort zone. Plodding along at a comfortable pace is not going to make you faster.

Did you do any training other than running?
I did some gym work but nothing too crazy.

How did you stay motivated?
I trained with a bunch of really great people. When I woke up in the morning, I wanted to get out of bed. The school I ran with also had a weigh-in every Saturday morning after our run. It’s amazing how this motivated me. I did not want to weigh in heavier than the week before in front of everyone. Having a goal weight for each race leading up to Comrades also helped a lot. It split this ultimate goal, which at first seemed impossible, into manageable chunks. When I achieved one of the smaller goals, it gave me the confidence and drive to go after the next one.

We hear you had a bet for Two Oceans. How did that start?
I was at a birthday party and, since a lot of my friends are runners, the conversation turned to running. Andrew, a mate of mine, said there was no way I would break six hours for Two Oceans. My reply was, “You’re right. I’m going to break 5:30.” Since my previous best had been 6:47, he could not resist taking the bet.

It was one of the things that motivated me during my training. It was about proving that I could do something that others thought I could not do. I won the bet in a time of 5:19. I have pictures of me collecting on my bet, but I did not have the money for long as I had to buy everyone dinner that night.

What portion of your improvement would you contribute to your weight loss?
Probably 60% to 70%. I look back and think, how did I ever run 56km at that weight?

Your time improvements in all distances are incredible. You must be very proud of these achievements.
What I am most proud of is not the times, but the fact that I stuck it out all the way to the end. It is so easy to be lazy, but like most things in life, the more you get the more you want. Take Comrades for example. I was disappointed with my time, definitely something I intend working on and putting right, but if I look back, I would have gladly taken that time six months ago. The funny thing is that people say to me, “It must have been so hard.” It was, but the only thing I remember is how much fun and how satisfying it was. I think that a lot of that has to do with the people I ran with.

What is the experience like running ‘higher up’ in the pack during races?
The first thing is your mindset. It’s totally different. You go from trying to survive to chasing certain splits so you concentrate a lot harder. As far as physical exertion goes, it’s by choice that you push. Your body is tired, but you have to keep going. Whether you call it adrenalin or endorphins, there is a special feeling you get when you run fast. It’s like going from point A to point B in a VW and a Ferrari. Both get you there, but the smile on your face when you get out of the Ferrari is a lot bigger.

How has being a fitter, leaner Fil Da Lomba affected your career and your social life?
I have quite a lot more energy these days. I find that when I go into the office after a run in the morning, I feel invigorated and ready to tackle the day ahead, whereas before, I would spend the first hour just trying to wake up and get going. It has also given me the confidence to tackle new things. I now know that if I apply myself and do the work, there is very little that is impossible.

Socially, I definitely have more confidence and am less self-conscious. When you have this extra weight, you tell yourself it’s not an issue but deep down I think you know it is. When you meet someone and they give you a compliment about your new, leaner physique, it makes you feel good and you become more confident.

How do you intend maintaining your weight going forward?
I’ll keep running and exercising, while sticking to my new eating habits. I would like to do an Iron Man triathlon in the next few years. Someone put it quite nicely to me a few months ago: for 31 years your body looked after you; now it’s time to look after your body.

What’s your next goal?
To try and qualify for the Boston Marathon. Whilst Boston may not be as well-known as London or New York, it is a very special marathon in that it has been going for over 100 years and has a very tough qualifying standard. Every person who is at the starting line is a pretty serious runner and needs to do some serious work. You won’t find anyone running in fancy dress at this marathon. In order to qualify for my age group, I need to run a 3:10 marathon. This is an opportunity for me to push myself beyond what I’m doing now, and I’m looking forward to the challenge.

Fil closes off with a fantastic message for our readers.
William Ross Wallace said, “Every man dies. Not every man really lives.” Next time someone tells you that runners are crazy, and asks you why you would want to run, just remember you are doing something that very few others have the ability or the discipline to do. You are really living.