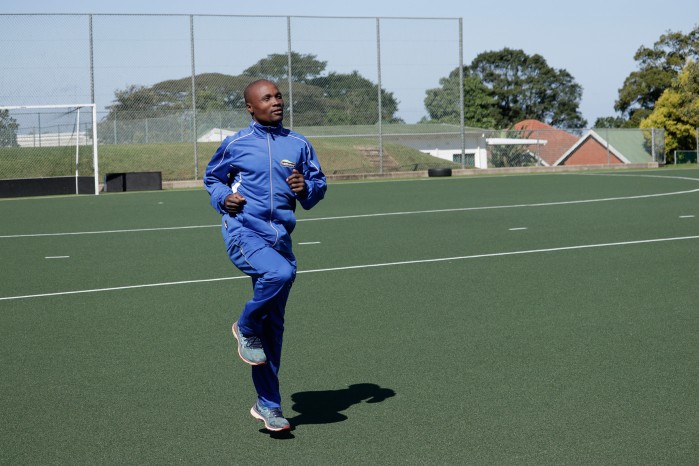 What makes someone come back year after year to tackle one of the toughest ultra-marathons in the world? Non-runners can’t comprehend it, but for die-hard Comrades runners, the siren’s call of those 89.9 kilometres of waiting tar, including the challenge to run it better than last year, is too loud to ignore. It’s this drive to continually improve on the previous year that brings 44-year-old Bheki Khumalo to the start line for the 15th time this year.

SOCCER’S LOSS, RUNNING’S GAIN
Growing up in Northern KZN, Bheki was too little to play soccer with the older boys, so to occupy himself, he started running around the field. Running soon became a passion, and Bheki never made it onto the soccer pitch. Instead, he was dreaming of running marathons. Despite not having running shoes – he trained in his father’s gardening boots – he started excelling in school races. On hearing about Comrades, he ran from his village to Mandeni to find an athletics club to join so he could enter this marathon of marathons.

His first Comrades was in 1996, which he finished in an impressive 7:23:16 to earn his first silver medal. It was also his hardest Comrades. “I didn’t have proper running shoes and wasn’t at all ready for the pain of that race,” he says. “I finished with bleeding toes and lost all my toenails.” Thanks to the generosity of a man who saw him running and gave him a decent pair of running shoes, Bheki came back stronger the following year to finish in an exceptional 6:52:00 and earn another silver medal. “It was those shoes,” he laughs. “They gave me the confidence to perform at my best!”

UNEXPECTED SUPPORT
Having moved to Wyebank in 2007, Bheki didn’t run as competitively as before. “With a young family there wasn’t the financial means to enter races or buy good running shoes. That was okay, every parent understands your children come first,” he says, but he didn’t stop running, because he says running is his life. “It’s like breathing for me, I have to run. It’s part of who I am.”

In 2015 he began working as a gardener at St Mary’s Diocesan School for Girls in Kloof, and when a teacher spotted him running on the school field wearing a Comrades peak, the school realised it had a successful Comrades athlete on its staff and began assisting Bheki to obtain running apparel and supplements. That support saw Bheki back on the Comrades starting line in 2017, for the first time since 2014, and he bounced back straight away with another silver medal in 7:09:03!

Now in 2018 he will line up for the 15th time, and he says he feels ready for the race. “I believe discipline, patience and learning what your body is capable of handling are the most important aspects of training. I run 8 to 10 kilometres from home to work and back every day. I’m up at 3am every day to train before work, and on hectic training days I’ll even start at midnight. I normally run one Comrades qualifier, but this year I ran three, including my first Two Oceans in Cape Town.”

“Good supplements are also important, especially as you get older. I’ve used Threshhold MSM for the past 10 months and seen big improvements in my stamina and recovery times. The painful joints and muscle stiffness I used to experience have gone. And post-run protein shakes help too.”

SHARING THE EXPERIENCE
When asked if he has any advice for first-time Comrades runners, Bheki says, “Make sure you’re as mentally and physically prepared as possible. No-one can be totally prepared for their first Comrades, but if you run at the same pace you train at, you’ll be okay. Don’t start too fast, and make sure you have proper shoes! Also, for nutrition, stick to what works, don’t try anything new on the race. I use protein shakes, peanuts and chips. I also take bananas and lots of water from the tables.”

Bheki adds that running has taught him so much, especially discipline and commitment. “I know no other life but running. It’s shown me how strong my desire to excel is. Each year I try to improve on the previous year, and unless you win Comrades, you can never stop improving or learning. Also, running seems like a solitary sport, but knowing there are people rooting for me has had a huge impact on my performance. I ran many races in the past where I was alone, and it was very hard, so I’m so humbled by the support St Mary’s has given me. My dream is to one day win a gold medal and have my family waiting for me at the finish.”