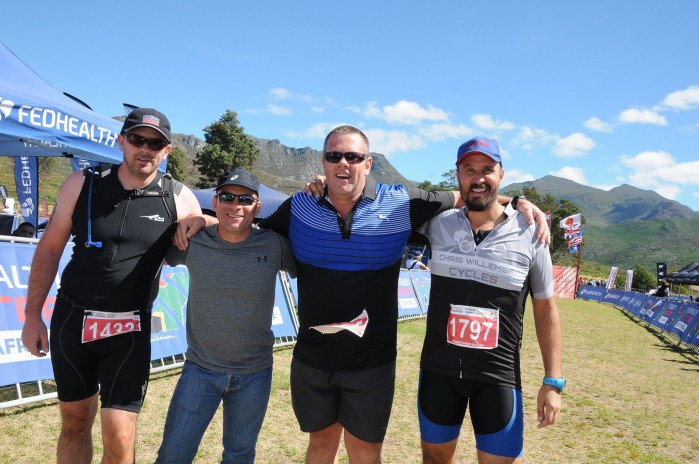 Running and all the running related sports have a wonderful way of bringing people together. Friendships are made, or rekindled, romance comes out of chance meetings, and sometimes you even have family reunions in unusual places. – BY SEAN FALCONER

Thanks to my part-time hobby of doing commentary at events, I enjoyed one of those family reunions at the recent Fedhealth XTERRA Lite Triathlon in Grabouw. As the athletes arrived to rack their bikes in the transition zone on that Sunday morning, I was on the mic doing pre-race announcements when I spotted my cousins Wesley and Dale. I took the opportunity to give them a special welcome over the mic and wished them well for the race. (I may have also cracked a joke about the famous Falconer receding hairline… glad to report that our clan has no problems laughing at ourselves!)

The commentary team rotated during the day, so we took turns working in various transition areas, or at the finish line, and I just happened to be at the swim-to-bike transition as the boys came running up from the water, so I gave them another shout-out. A while later, I just happened to have moved to the bike-to-run transition when they arrived back, so I got to chat to ask them how the race was going thus far, then send them on their way for the run leg.

As luck would have it, I rotated back to the finish line a while later and was on hand to bring them up the home straight, with the words, “The Falconer Boys are here!” Johanna Ginsberg of Jetline Action Photo was on hand to snap a quick pic of the three cousins, along with their friend and fellow racer Ralph Shminke, and that’s definitely one for the family album.

Meanwhile, fellow commentator Paul Valstar quickly pointed out, over the mic, that my branch of the Falconer clan apparently missed out on the tall genes… No argument there! (See what I mean about us being able to laugh at ourselves?)

These are the experiences and memories that make me so glad to be a runner, as well as being a journo and commentator in the running domain. I never, ever lose sight of the fact that I am damned lucky to have such a dream job, and to be surrounded by so many wonderful people.