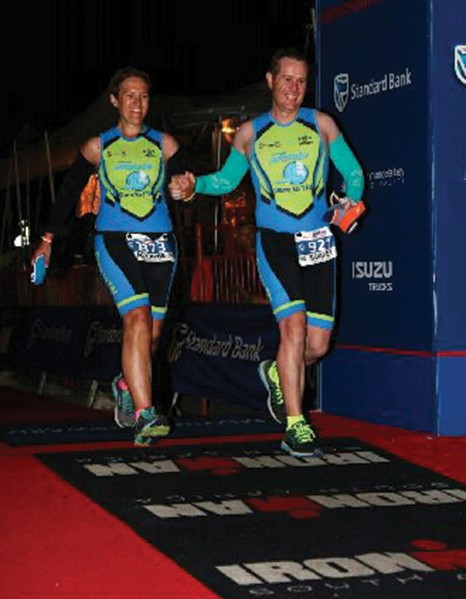 Ironman couple Rodney and Melanie Nel finished the Ironman hand in hand on the red carpet in 2017, having only done their first triathlon a few months earlier, once again showing that the Modern Athlete DARE TO TRI Programme will get you to the finish line. – BY DTT COACH DERICK MARCISZ

The Nel couple joined DTT in July 2016 and did their first triathlon at the 5150 Bela Bela, then went on to do 70.3 East London earlier this year. “We consistently followed the DTT programme and participated in several triathlon events throughout the season. Although we always stuck together during training, we competed separately in races – each to our own abilities,” says Melanie.

After 70.3, Rodney decided he wanted to do the full Ironman, and Melanie decided she might as well enter as well, as she would be doing most of the training with him anyway… but what she didn’t know was that Rodney had decided to do the race at his wife’s pace. “During the months leading up to Ironman, Rodney decided that he wanted to stick with me on race day, as a symbol of starting and finishing this journey together, but he only mentioned this to me two weeks prior to the event. I never expected him to commit to something like this, since he is stronger in all three disciplines, and I knew he would have to adopt a slower pace,” she says.

Of course, due to the fact that it is just about impossible to keep track of anybody in the swim, the couple devised a strategy to be able to race together. “I started the swim a couple of minutes ahead of him in order to arrive in the first transition roughly the same time,” explains Melanie. “Beforehand, we agreed where to meet just outside the transition area on the bike course – whoever was there first would wait for the other – and from there on we stayed together for the entire race. I was especially thankful to have Rodney by my side during the run – it was tough mentally and physically.”

The Nels finished hand-in-hand in 15:34:23, and Rodney says “I knew what Melanie was capable of on race day, and allowed her to set our pace. I was merely the extra mental support she needed. Every Ironman finisher says the red carpet moment makes it all worth it, and as we held hands, we heard the announcer welcoming the “Nel Family” on to the red carpet. That was a moment to treasure for the rest of our lives! Now we are planning to be back in 2018, to do the race each to our own.”