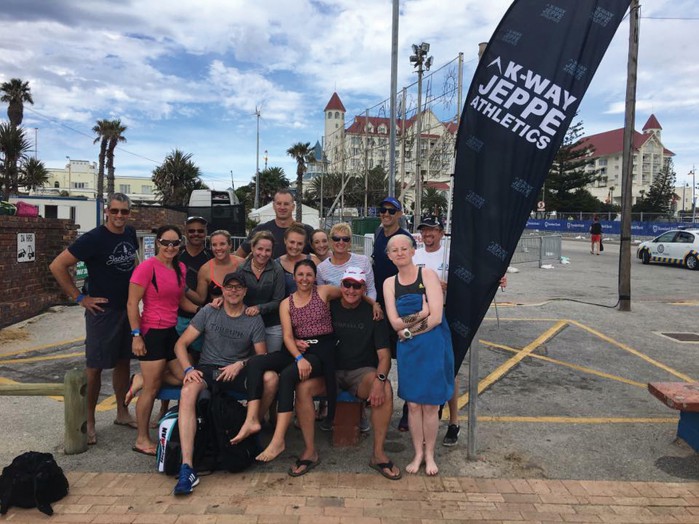 Having used the Modern Athlete DARE TO TRI Programme to go from being a tri novice at Bela Bela to a good Ironman finish in PE of 13:29:50, Jason Edgecomb says he is ready for more of the same!

During April 2015 I was informed by a doctor that I should stop running altogether, as he had diagnosed a hip condition that would be aggravated by running, and eventually, in years to come, could result in a possible hip replacement. Needless to say, I stopped running immediately! I could only get an appointment to see an orthopaedic surgeon that specialises in hips four months later, and he assessed my hips via X-rays and an examination concentrating on stride, stride length, landing position and gait. He derived that being so tall (6 foot 4) resulted in me over-striding and subsequently putting too much stress on my hips.

I then saw a running style specialist as well as spoke to Jeppe Athletics and DTT coach Derick Marsicz, who both helped me adjust my running style, and the hip pain subsided. I had also been taking a natural supplement that helped me with my hips as well as other health-related benefits. That allowed me to finish my first Comrades in May 2016, and two weeks later I decided to accept the challenge of becoming an Ironman, so I contacted Derick and joined the Modern Athlete DARE TO TRI programme.

Up for the Challenge
Being terrified of open water swimming, I trained my swimming up to four times per week. I barely managed 550 metres in my first indoor session, but with Derick’s guidance I was soon completing 2000m sessions in the gym, and the coached open water swim sessions with DTT helped my confidence. Meanwhile, the bicycle training was also a challenge. Due to my height, it was difficult to find a bicycle that suited my length, but I eventually sourced a bicycle from a friend who is even taller than me. Then I ensured that I attended every weekend DTT ride – even though one of the regular training venues is more than 50 minutes’ drive from my house – and Derick helped with technique and gearing.

In August last year, I attempted my first triathlon at the Bela Bela 5150, which I finished in 3:05. The event was superb and I was ‘triathlon hooked,’ which saw me sign up for the full Ironman in PE, and so I continued to train with DTT. With two sessions per day, the late evening sessions were the hardest, as my wife trains as well and we needed to juggle our family commitments, as we have two young daughters.

Six weeks before the Ironman, I attended a Two Thirds Ironman distance training camp in PE, on the Ironman course. The sole purpose of attending the camp was to ensure that I was comfortable with the sea swim. Derick had advised me to concentrate on the swim and gauge my feelings for the race, and I ended up swimming 3.3km and felt good.

Ready for Action
So we arrived at race day in April, and it was amazing to stand on the beach amongst all the other athletes in wetsuits. The staggered start was fantastic and I started the swim feeling good and having fun, and the 3.8km swim was over much sooner than I expected. I really enjoyed it so much that I even ran from the beach into T1. The bike leg was also awesome, with stunning views along the coast. And I just kept reminding myself of the things Coach had taught me. It was awesome to see my wife at the 90km turn point, and I saw her again as I exited T2, to begin the 42.2km run.

I was dreading four loops of the run, but the loops actually proved to be stunning, thanks to the familiarity of landmarks as well as the support from friends and spectators. Even better, the camaraderie amongst the DTT, Jeppe and other Ironman participants was fantastic, so I looked forward to each loop to collect my loop bangles. With all four collected, the finish for a sub-5-hour marathon beckoned, and those final 100 metres were phenomenal, when I could hear the announcer and see the red carpet, as those words rang in my ears when crossing the line in 13:59: “You are an IRONMAN.” It was spine-chilling!

In fact, I enjoyed the event so much that I have signed up and registered with DTT to complete Ironman 2018!

Sign Up Today!
The DARE TO TRI programme is an affordable, manageable and sustainable training programme that fits in with your family, work and social commitments. For just R1500, you will receive coaching and be able to join coached weekend group training right up till Ironman PE on 15 April 2018. You cannot get this level of coaching for a nine-month period at this cost anywhere else!

For more info on the Modern athlete DARE TO TRI Academy, or to sign up, go to https://daretotri.canbook.me/dtt-2017, or contact the Coach at Derick.marcisz@stemcor.com.