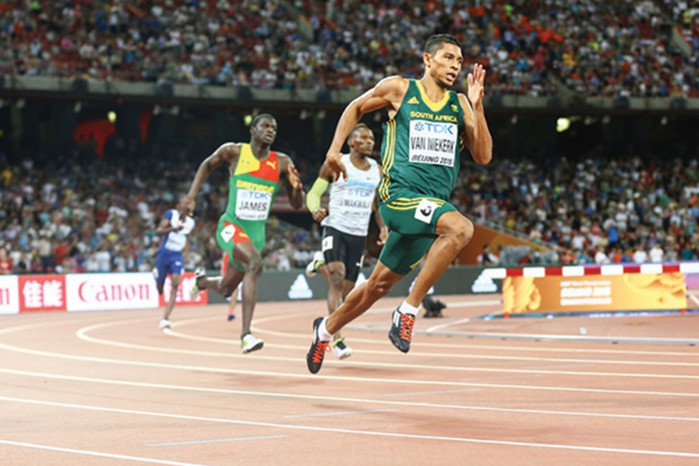 After an incredible 2016 that saw 400m superstar Wayde van Niekerk add the Olympic title and the World Record to his 2015 World Champs title, he is now looking forward to chasing more titles in 2017 as the World Champs come round again. – BY SEAN FALCONER

He may be quietly-spoken, but when Wayde van Niekerk speaks, people tend to listen. That comes with the territory when you are the reigning Olympic Champion and World Champion, and broke Michael Johnson’s 18-year-old World Record (43.18) in Rio with a scintillating 43.03! We managed to sneak a quick Q&A session with him, and asked about his plans for 2017 and trying to do even better than his stellar 2016 season.

MA: These days you are the ‘poster boy’ of SA athletics. How are you handling all the attention?

WvN:It’s definitely been a great journey, and I’m really just enjoying the space, the environment and the experiences I’m going through right now. It’s really been a massive blessing, and a huge motivation to keep on doing what I’m doing – and appreciating this moment that I have.

MA: The big news late last year was that you proposed to girlfriend Chesney Campbell…

WvN:It’s long overdue, because I’m always so busy, but I really felt I it was the right move. I’m really in a good space now, and I’m excited about it. I think it’s another great journey to go on, sharing the special moments with somebody that you love and care for, and she plays such a massive role in keeping me focused on athletics.

MA: Are your studies on hold due to all your success on the track?

WvN:I’m progressing, but not in the same way that a normal student would. I do what I can, and try not to force it, so that I can do well with what I have, but also not neglect my training, and so be able to reap everything that I’m going through now with track and field.

MA: What about after your studies? Do you plan to stay in Bloemfontein and continue training with Tannie Ans Botha?

WvN:Yes, it’s an ongoing journey. If Tannie Ans and I are still finding success and things are going our way, I don’t see any reason to change, so we’ll see what the future holds in store for us and go from there.

MA: Your relationship with her is really close, and that seems to help you perform better…

WvN:She is such a strong character and such a great person, and you can really learn so much from her. I mean, at the age of 75 and achieving the peak of her career… who wouldn’t find that inspirational? I am only 24, and by comparison, I still have another 50 years to reach my dreams!

MA: Let’s move on to Rio. Going into the final, how did you feel about running in the outside lane and not being able to see your opponents?

WvN:I really didn’t mind running in lane eight. I just thought it’s a final and I have to get the job done. So for me it was about staying focused and use that opportunity, not taking for granted the occasion and the moment I had. So whether I was in lane one or eight, I was going to go out there and give it my best – and luckily that was a World Record and Olympic Gold this time around.

MA: Because you were in the outside lane, it looked like you just ran the race as hard as you could, as if to say to the others catch me if you can – and even accelerated away fro them in the home straight – but did you know what was going on behind you?

WvN:I literally did not see a single person the entire race! I think there is some truth to the fact that because I was in lane eight, I just went out there and ran, and I still see it as a massive blessing in disguise, because I had been struggling with hamstring and back injuries over the last year, and I felt some pain that day as well, but because I was in lane eight, not having to chase anyone probably did play to my advantage. And it ended up being the reason why I won the Olympic gold.

MA: You collapsed on the track after winning the Wold Champs title in Beijing, so you couldn’t do a victory lap, but in Rio you made it round the track again. What was the difference?

WvN:In Beijing, it was really because of the mental aspect of the 400m, and of winning at that level. If you think back, I had only been doing the 400 for two to three years, and that’s really nothing… you need years to get yourself mentally strong, not just for the 400m itself, but also the feeling afterwards. That’s what I have tried to do ever since Beijing, to be able to run my best, then enjoy the moment and do that victory lap. I think in 2015 I was not mentally strong enough to take myself through that, because in the 400m you really start to feel the effects straight after the race, and that’s something I had to fight. Luckily in 2016 I got it right and could enjoy the moment.

MA: What did the other athletes say afterwards to you? Usain Bolt came over to congratulate you, but what about your main rivals, Kirani James and LaSawn Merritt?

WvN:There was a lot of respect shown amongst us, and I have always shown respect to the guys I have competed against, because they portray a positive image for track and field. Actually, it’s still something that I have to remind myself about, that this is my reality, because I never thought I would make it this far, so I’m really just using this opportunity, and not letting it slip, building myself as an athlete and using every single door willing to open for me.

WvN:I actually love the 100 and 200 way more than the 400, but the 400 is my God-given blessing, and I’m not going to let it waste. So this year I am going to spend some more time on the 100 and 200, to work on my speed and because I love to play around in the short sprints, and I think I will compete seriously in the 200, but I will need to put the times on paper before I can get the races. But I still have work to do in the 400m, and that will remain the focus.

MA: That raises the question, do you think you can ‘Double’ in the 200 and 400 at the World Champs in London later this year?

WvN:That’s the plan… I have already decided I want to double up at World Champs, but for now I am just taking it one step at a time. As you have seen, I love the 100 and 200 as well as the 400, so wherever I place my focus, I will invest in it and see where it goes.