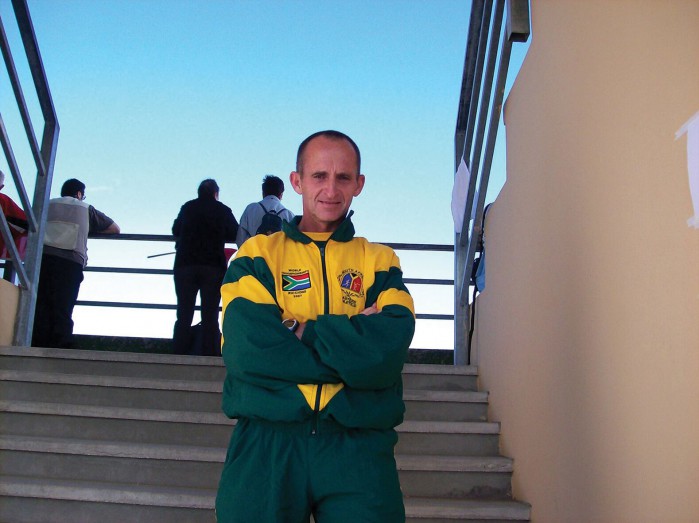 With nearly 50 years of race walking experience behind him, both as a record-breaking athlete and as a highly successful coach of multiple Olympians, SA Champs and SA Record-holders, Carl Meyer is a true living legend of South African athletics. – BY SEAN FALCONER

Carl Meyer can thank his parents’ decision to move for motivating him to take up walking… although it wasn’t the sport that initially got him walking. Born in 1957 in Springs, Carl then moved with his family to Heidelberg, but still travelled back to Springs each day for school. That saw him catch the 30-minute railway bus to Nigel at 3:45am, then wait at Nigel Station till 5:45 to travel to Springs Station, followed by a 3km bus ride to the school. “My mother would give me money to buy food at first break, plus bus money for the last 3km to school, but I decided to save the bus fare to have money for both breaks at school, so I walked the 3km. All the other guys would wait for the bus, and I would get to school before them.”

However, before he took up race walking, Carl first tried running. In 1969 his mother entered him in a local 10km road race, but it was not the auspicious debut that he had envisaged. “Being a youngster, I thought I could win it and claim the big prize money. Instead, I came second-last, and I was not too happy,” jokes Carl. Then when he was in standard seven the school announced that a walking event would be added to the inter-schools athletics programme the following year, so the school would be holding trials. “Our PT teacher made all the classes walk around the rugby fields for 10 minutes, and the boys who went furthest got selected. Even though I was still the smallest guy in the school, I walked furthest amongst all classes and I was selected.”

However, before the new school year began, Carl’s family moved to Alberton and he transferred to Helpmekaar High School in Johannesburg, which had already had trials, so he had to wait for the inter-house colour meet to show what he could do. “They had a guy in Matric called Henry Golden, who was the reigning schools provincial walking champ, and I beat him in that first meet.”

Record-breaking Walker
By 1973, aged 16, Carl was being coached by his father and also had Air Force Colonel Andre van der Heever as his mentor. “My father went to the Joburg Library to find books on race walking, and I used them to teach myself the right technique. He would also take me to Andre every second Wednesday to check my technique, because Andre was a provincial walking judge. He always said I had one of the best techniques he’d seen.

That year Carl was ranked sixth in the Youth age category, so his father asked him, “Are you sixth-best, or best?” When Carl answered that he was the best, his father said, “All right, then you won’t race the SA Youth Champs, you will rather take the winter off from competition to train.” Andre had told Carl he needed to increase his mileage, but neither he nor his father knew what “plenty mileage” meant. “So my father decided that every second Saturday morning the two of us would go for a long walk from Heidelberg towards Meyerton, with my mom driving the Valiant 15 miles out to give us water, and then we walked back. If you wanted to see two dead people, that was us!”

“I no longer see it as a reflection of my ability, but rather a direct reflection of the administration of the sport. It shows that athletes are not getting the opportunity to race. In those years the number of races was greater – two a week on average, so we would do about 20 to 24 races in a season. Today our walkers are lucky if they get five in a season! And it seems the more you plead for more races, the more they seem to shift race walking to one side,” says Carl. “Also, in those days we had exciting walking events that were part of the main programme at the big meets. Nowadays, we are lucky just to be part of the pre-event programme, with no TV coverage, and at the ASA Track and Field Champs, they only have a road walk on the programme, as the organisers say there is not enough time in the programme to include track events.”

Getting Into Coaching
After school Carl studied psychology at RAU, married Stefnie and had three kids, sons MJ and Nicholas and daughter Zoe. Now living in Boksburg, Carl is the Managing Director of PayDirect, a telephonic payment gateway service provider. After a long competitive career, Carl retired from senior competition in 1995. That year he was awarded national colours when selected for the IAAF Race Walking World Cup in Beijing, where he finished 73rd in the 20km, but he was bitterly disappointed not to be selected for the IAAF World Champs later that year, even though he had posted a faster time than one of the athletes who was selected.

“I was deemed to old at 38 to be selected – ASA’s age limit was 36 – so I decided to retire, but soon I was missing the track, and towards the beginning of 1997, my wife suggested I go into coaching. “So I attended the SA Junior Champs in Germiston and saw a junior, Ian Collins, with the most amazing leg speed. I told him if ever he needed a coach, he was welcome to contact me, which he did. He had massive talent, but once he finished school his career unfortunately took over and he never really achieved his true potential.”

“Around the same time I got call from a group of ladies in Vanderbijlpark who said their daughters were overweight and needed to exercise. It was the first time I got paid for something in race walking! Even better, I immediately spotted the potential of this one very tall girl, Leanne Watts. After 12 weeks of coaching, she had lost 27 kilograms, and she went on to represent SA together with another of my athletes, Nicolene Cronje, at the 2000 African Junior Champs in Mauritius, where Nicolene won and Leanne finished second. Nicolene still holds the SA senior records for 3000m, 5000m, 10,000m and 20,000m, and Leanne also set an SA Junior Record for 10km, which stood until another of my athletes, Anel Oosthuizen, broke it in 2012. Anel currently holds the SA Junior Records for 5000m, 10,000m and 10km, and the Senior 20km Record, and I think she is ready to break the Senior 3000m, 5000m and 10,000m SA Records.”

Carl is the only IAAF Level 4 race walking coach in SA and is rightfully proud of his coaching career, which has produced two Olympians (Nicolene in 2004 and Anel in 2016), as well as 44 SA Champions, more than 40 SA Records, as well as multiple World Masters Champs medallists. Carl himself has won many SA Masters titles and medalled at three World Masters Champs, and currently holds the SA Masters 10,000m record for the 50-54 age category. “My intention is to go to the World Masters next year in Spain, when I move up to the 60-64 category, because I’m still in good shape and want to go after some new records for 5000m, 10km and 20km,” says Carl.

Hurdles to Overcome
After nearly 50 years in the sport, and having served as Chairperson of the ASA Race Walking Committee, Carl says he is saddened by the future prospects of the sport in SA. “Due to the insight of former ASA President James Evans, who took race walking on as a personal project, we made great progress. James gave us a clear instruction that race walkers must manage themselves and set their own standards, and ASA will then make it possible for them to attend World Cups. That saw us take sizable teams to various World Cups, including up-and-coming juniors like Anel and Lebogang Shange, and that eventually paid off when we had four walkers qualify for the Olympics last year for the first time.”

“However, since 2014 there has been a new administration at ASA, and a new way of thinking, so now we no longer take big teams to World Cups, and the standards set by ASA are so unrealistic that Anel says she doesn’t know if she will be able to qualify for another ASA team. Sadly, I don’t think we will see four walkers qualify for the next Olympics unless things change.”

In recent developments, Carl’s contract as a coach with the University of Johannesburg (UJ) Athletics Club was cancelled, due to cost-saving measures forced by the fallout of the Fees Must Fall movement, and he says this is having a negative effect on Anel’s training, as he is no longer able to drive to UJ from Boksburg to pick her up and take her to a safer area for walking at the Johannesburg Botanical Gardens. “There are a lot of hurdles in front of not just us, but the sport of race walking, and I hope that things will change for the better soon. But it will take a lot of work.”

2 thoughts on “Going for a Walk”