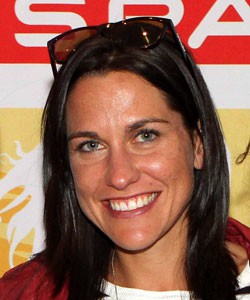 
“I think the SPAR Challenge is such an important event, and I feel very honoured to have been named Patron of the race,” said De Bois.
“It’s all about women, and about women pushing themselves to achieve something. It is also about showing that you care.


“I’ve had many traumas in my life, and I know how difficult it is to get up off the floor and face the world again,” she said.
“Last year, after my sister committed suicide, my whole family, including my nine-year-old daughter, completed the 5km Fun Run in honour of my sister, because she often used to do the SPAR race. I loved being surrounded by all those women, and I definitely felt the spirit of my sister.”

“I am actually more of a cyclist than a runner – I will walk rather than run, but I will definitely be there to be part of all those women who are empowering themselves. I call on the women of Johannesburg to take the challenge and join us on Sunday October 9 at the Wanderers Club.”


While Mel de Bois may be not much of a runner, the other race patron, Rene Kalmer, is very much a runner, having won more SPAR races than anyone else. She won her first title at the tender age or 14 and has continued to shine in the SPAR races since then. She has won the prestigious SPAR Grand Prix title three times, in 2007, 2009 and 2012.


Kalmer will not be running the 10km race at the Wanderers because she is recovering from a hip operation earlier this year.
“But I will be there to watch, and to support my sister Christine and as Patron inspire and thank all that enter,” said Kalmer. “I am a huge fan of the SPAR Races,” she added.

“The Challenge series has done so much to promote road-running in South Africa. A lot of women start off by running one of the races, and then find the road-running bug has bitten them.
“I love the fact that so many women are involved in the SPAR races, so those of us who are the elite runners feel part of a whole community.

The elite runners also enjoy taking part in a race that is all about women. It is much more satisfying to win a race when you know that you are the first person to cross the finish line.”
She said the Joburg race was one of her favourites.


“There is always a very good vibe at the Joburg race, and I love its association with Reach for Recovery, which is a support group for women with breast cancer.
“I am sad not to be running this year – maybe I will walk the 5km Fun Run! But I am very happy that SPAR asked me to be a patron of the race, so that I still feel involved in it,” said Kalmer.


“I would like to urge more women to experience the joy of taking part in the SPAR Challenge.”
Entries for the 10km race and 5km fun run are still open. There are goodie bags and race T-Shirts for the first 15 000 entries and all race finishers receive a medal.


Entry forms are available from SPAR stores or online at www.spar.co.za or you can enter at The Wanderers Sporting Club, Thursday – Saturday 6-8 October.