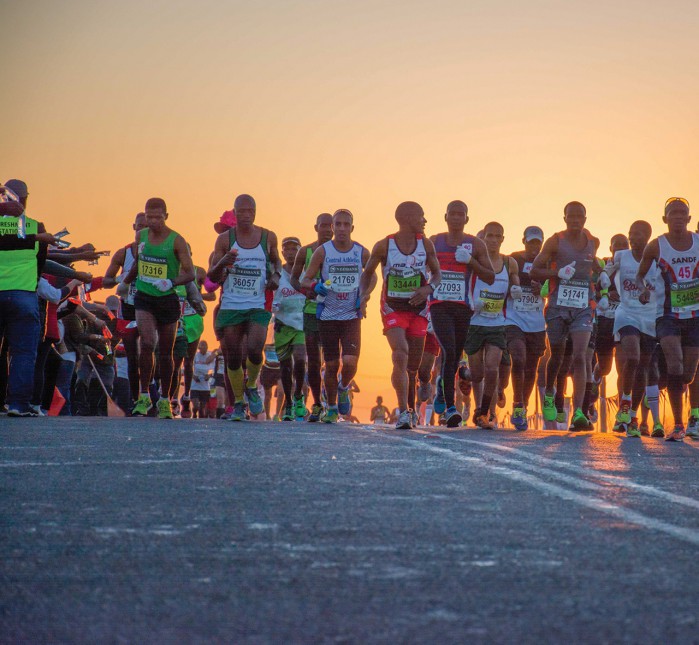 The annual awards gala of the Comrades Marathon Association (CMA) kicked off in spectacular fashion on Saturday the 15th October 2016 as the CMA honoured amazing individuals together with the major sponsor, Old Mutual.

The Old Mutual Spirit of Comrades awards gala celebrates three remarkable individuals every year for their very human attributes of selflessness, dedication, perseverance and Ubuntu, combined with their love for The Ultimate Human Race.

“These are people whose selflessness, compassion and humanity have given rise to extraordinary acts,” Said Karen Thomas, Old Mutual Head of Brand. “Old Mutual is very proud to be associated with an event that salutes these people and honours the very best of human nature.”

The three Spirit of Comrades recipients is presented with a one-ounce, 24 carat gold medallion, courtesy of major sponsor, Old Mutual, as well as due recognition of their remarkable qualities.

The first of three recipients was Mr Amit Sheth, who has successfully completed The Comrades Marathon five times, was the first Indian national to have run the Comrades Marathon in 2009. In the same year, he was appointed the Comrades International Brand Ambassador for the Indian subcontinent. With his book, Dare to Run a bestseller in India, published in 2010, he has managed to motivate and inspire people from all walks of life to start on the path of running, and more specifically to take up the Comrades challenge. In 2016 nearly 100 runners from India entered The Ultimate Human Race. Amit is a CEO at a successful Engineering firm is also a motivational speaker of note who has a large charitable heart. He has donated over two and a half million Rand for the cancer treatment of underprivileged children at the Tata Memorial Hospital.

The second Old Mutual Spirit of Comrades Award, was given to Rupin Mehta. A man who sacrificed a fifth consecutive Comrades medal to ensure that other runners achieved theirs. With a staggering number of Spirit of Comrades Award nominations coming in for Rupin, this amazing soul went on to demonstrate that a good deed seldom goes unnoticed. The images of an exhausted Rupin getting down on his knees to assist a fatigued runner will be remembered by the many who had been watching the Comrades Marathon this year.

Rupin first came to the assistance of Johan Kotze, who was struggling to continue with his race at 45th Cutting in Sherwood. With Rupin’s help and a bit of massage and motivation, Johan managed to complete his race and earn his medal within the 12-hour cut-off time. At the finish, Rupin came across another athlete, Samantha Douglas who he tried in vain to help, but unfortunately they did not make it across the finish line in time.

The final award went to Dr Wadee, who was well on his way to enjoying his third Comrades Marathon finish when at Botha’s Hill, he came across a struggling runner, Willem Stolp, who had collapsed and whose health was deteriorating at a rapid pace. Dr Wadee, well aware that he may not make the cut off rushed to Willem’s aid and remained by the side of Tzaneen Athletics Club member rendering emergency medical intervention. By the time the paramedics had arrived on the scene, Willem was stabilised, thanks to the doctor’s efforts. Too much time had lapsed for Dr Wadee to complete his race and he decided to call it a day thereafter.
Tzaneen Athletic Club Chairperson, Paul Zaayman said, “Dr Wadee displayed a sense of selflessness that is admirable. To think that he sacrificed his own medal to help a total stranger – that is truly what the Comrades is all about!”

Amongst some of the other winner’s was Journalist Khanyiso Tshwaku, a reporter for the Times Media Group, who won the Journalist of the year award for having written the most articles and garnered the highest amount of AVE’s for the Comrades Brand this year.

David was honoured for breaking the previously recorded best down-run time by 2 minutes and 22 seconds. While Charne ran the race of her life this year, especially the final kilometres of the 2016 Women’s race, which viewers are least likely to forget.

The CMA honoured the effort of individuals and organisations who have contributed in a significant way to the Comrades Marathon Association over the years. The Certificates of Appreciation were presented to SGB and Interflora for 30 and 20 years of service respectively, to the CMA and for going beyond the call of duty in adding value to the Comrades Marathon.

The CMA Life Membership Award was given to Brian Swart, a member who had not only completed the comrades Marathon 15 times but had also rendered outstanding meritorious service to the race. Brian has served the CMA in various capacities for 38 years. His nearly four decades of service to the CMA includes contributions to the route-marking, publications, finish procedure and green number club portfolios; and most recently, convening the International Bus Tours.

Special acknowledgement was bestowed on a man of outstanding merit. Mick Winn, who was honoured with a distinctive tribute to his 50 years of service to the Association.

The CMA announced that it will rename the Comrades Hall at Comrades House, “Mick Winn Hall of Honour” in respect of him being the founding Chairperson of the Comrades Marathon Association and for his immense contribution to the CMA.

CMA Chairperson, Macdonald Chitja said, “We are delighted to honour these outstanding individuals at our flagship awards gala tonight. Each of them has a unique story of camaraderie and goodwill that inspires us all to be the best we can be. It is incredibly motivating and we applaud them all.”