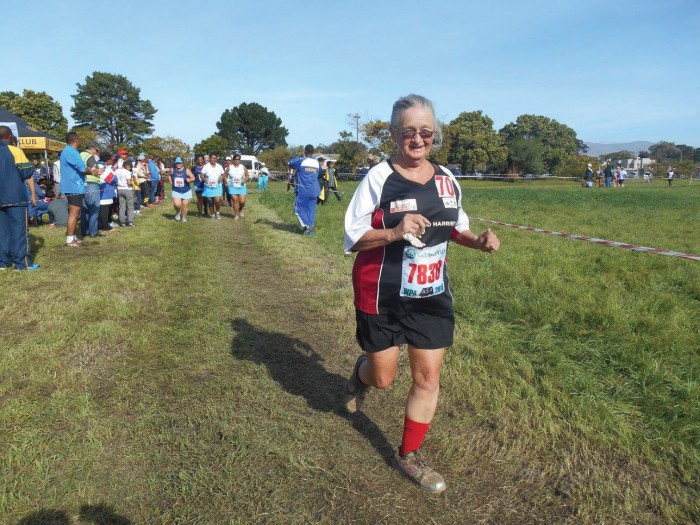 Proudly wearing her Great Grandmaster age category tags, 74-year-old Annatjie Berntzen of Cape Town lines up most weekends in a race, including trail runs, has a good chat with countless running friends and continues to amaze and inspire many a younger runner. – BY SEAN FALCONER

In the recent local elections, Annatjie went to vote and was happy to wait her turn to make her mark, but when the officials saw her age they immediately took her to the front of the queue, as is the norm with all voters over a certain age. Voting done, she headed home again and later that day, while chatting to her cousin, she mentioned the special treatment she had received, and the first thing her cousin said was, “But you still run like a young person, so why do you need to go to the front?” That’s similar to the reaction the diminutive pocket dynamo from Parow gets from many younger runners each weekend in races up to 21km long.

“Runners often call me Ouma and ask me when I started running, or what made me start. Some even ask me how I ran in my 20s, and when I tell them I actually only started running in my 60s, they usually don’t believe me. Some even ask to take their picture with me! I am just grateful that I am able to run, and I love that others tell me that I inspire them. In one race I was told by a big group of new runners that they used me as a target – they just wanted to get past the little old lady in red socks! At another race somebody saw me running as well as another 70-year-old woman from the Ommiedraai club, and actually put R100 in an envelope for each of us and gave it to the commentator to hand to us at prize-giving, just because he or she said we are so inspirational. I was so surprised!”

BITTEN LATE BY THE BUG
Born in PE, Annatjie grew up in Cape Town. After school she began doing administrative work for Spoornet in the 1960s, during which time she got married and divorced, before moving to Pretoria to begin working for the Department of Public Works (DPW) national office. The last 10 years of her working career were with the DPW in Polokwane, until her retirement in 2007, when she moved back to the Cape to be near family and friends. “My brother and sister both live in Cape Town, and I had been friends with Venita Nel for many years as well, and that also played a role in my decision to move back down.”

It was Venita who got the recently retired 65-year-old Annatjie into road running. “I arrived back in Cape Town on 1 October and later that same week Venita took me with her to do a 5km fun run at a race in Simon’s Town. I even took my little dog with me and we had a nice walk. I had never taken part in any sport, but for some reason in 2007 I started going to races regularly with friends, and as they ran their crazy 10km or 21km races, I started walking all the 5km fun runs, just for fun.”

“Then in 2009, when I turned 67, I joined Tygerberg NLK Athletic Club and decided that I was now ready to take on a 10km race, and I finished my first one in 1:29:28, just 30 seconds before the cut-off. That year I did all the 10km races, usually just coming in before cut-off, but finishing what I started for a well-deserved medal. Then I wanted to do 15 and 21km races as well, so in 2010 I did my first half marathon at the West Coast race, finishing in just under three hours. I also joined the 1000km Challenge Club in 2010, where the goal is to run 1000km in a year in races, and I have conquered the challenge every year, also being the oldest woman in the country to complete the challenge in 2013, 2014 and 2015.”

STEPPING IT UP
Having done the John Korasie 30km race in 2012, her longest run to date, then 71-year-old Annatjie went to the 2013 ORAK 12-hour circuit race in Vredendal aiming to do another 30km… but it didn’t end there. “I only wanted to do 30km, but when I reached the 30km mark in four and a half hours, I thought to myself there is still more than seven hours left till cut-off, so I decided I can still do another 30km and get a silver medal. So off I went, and at 4:30pm I reached the 60km mark. The silver medal was mine, but my friends still cannot believe that I ran 60km. Neither can I, really!”

Later that year, Annatjie decided that she was ready to try a marathon as well. “One day I was chatting to Venita and she said some people want to run a year or two before they take on a marathon, so I asked her if she thought I could do one, since I had been running for more than six years, and she said she thought I could.” That saw Annatjie enter the Sanlam Cape Town Marathon, with its generous eight-hour cut-off, and she sailed home comfortably in 5:46 for the best time of the year in the Cape for a 70-year-old female marathoner. The following year she ran the marathon again, clocking 6:10 and finishing third in her age category on the revised route. “I found the marathons enjoyable, but a bit far for me,” says the intrepid Annatjie. “My friends say I can run the Comrades, but I am definitely not that mad!”

LOOKING AHEAD
Annatjie shows no signs of slowing down. In fact, she recently stepped into trail running for the first time, even donning a headlamp and taking on some of the increasingly popular night runs on golf courses! “I do at least one hour of walking every morning, and a 5km time trial on Tuesday evenings, and then weekends are for races. During the races I joke, ‘make way, here comes the old age home,’ but I am healthy and just enjoy my running. I still get the normal aches and pains, but nothing serious, and my doctor is very impressed with me.”

“Up till now, I’ve done more than 110 half marathons, and only two were not finished under three hours. When the day comes that I can’t make the 3:30 cut-offs, then I will retire from 21s, but I will keep running the 10s and fun runs. For me it is great to run, to enjoy the conversation on the road, and it keeps me going. I have a lot of friends and family, so running gives a whole other thing, and then at trail runs you meet a different crowd to the road running community, so I really enjoy the social side of the sport. But I do need to be careful about chatting too much in races. At the Silver Queen 10km, Jenny of West Coast and I were having such a good chat that we got lost. The first time we realised we had gone wrong was when we entered the finish in under an hour, which we know we cannot do! Still laughing about that one.”