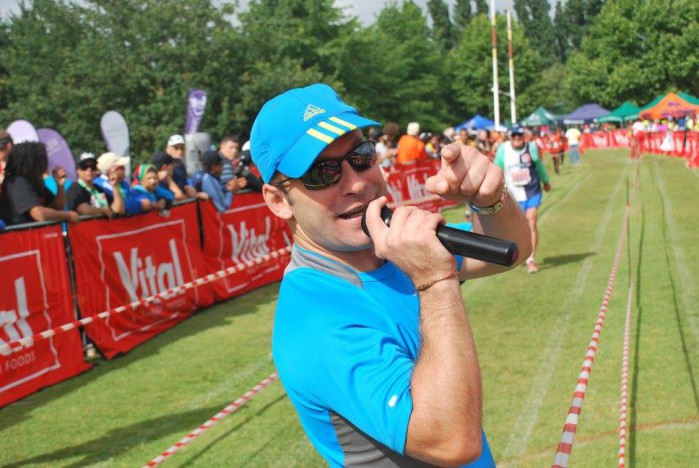 2 Sep 201617 May 2019 Modern AthleteColumns
Share
Tweet
0 Shares
While commentating at a recent half marathon, I think I was asked the best ever question by a runner before a start, so this blog is dedicated to Mr Doughnut Man, who really made my day.
I had just set the half marathon runners on their way, so now we were getting the 5km fun runners lined up and ready to start a quarter of an hour later. As is normally the case with fun runs, there were a few nervous newbies on the line, looking like they weren’t sure what they were getting themselves into, but most looked ready to run or walk. Then it happened. I got asked the best pre-race question I’ve ever heard.
When you are a race commentator, you become the local ‘Info Officer,’ with many athletes coming up to you to ask about various things to do with the race, like where are the entries taken, where are the toilets, where is togbag security, where is the start line, where is the turnaround point, what time is the start, is there a cut-off time, etc, etc, etc. Let’s just put it this way: Runners ask a lot of questions… so a commentator has to repeat the basics over and over before a race starts.
So when a gentleman with a portly disposition walked up to me, serious look on his face, and asked if there would be any water tables for the fun-runners, I put the mic behind my back to cut our conversation out from the rest of the field and immediately answered yes, thinking he needed assurance that he was not about to be abandoned out on the road without water or marshals to guide him back to the finish line. But then he hit me with the second part of his question, and I was temporarily speechless: “Will the water tables have any doughnuts?”
He just stood there with an enquiring, almost hopeful look on his face, whereas the look on my face must have been a cross between disbelief and concern about losing my marbles. But then his face cracked into the biggest smile I’ve ever seen and this loud guffaw of laughter erupted from deep in his ample belly. He was absolutely wetting himself at my reaction!
It took me a moment to process this, because I was in serious commentator mode, thinking logistics and practicalities, but then I was laughing, too, and I took the mic out from behind my back and shared the joke with the rest of the field. That got a great laugh, and I think it helped relax a few of the first-time runners and walkers as well.
Blow me down, about 30 minutes later a car stopped next to the finish line where I was commentating, the driver rolled down his window and called me over, then introduced himself as the owner of one of the cocktail bars near the start and finish. All the restaurants and bars on the beachfront were open early on the day to cater for the runners, and he said he’d heard my joke about doughnuts, so he’d decided to do something about it. He’d actually gotten his wife to make a big batch of doughnuts, and here was a plateful for me!
A short while later Mr Doughnut Man finished his 5km walk, and I asked him if he’d found the doughnuts along the way. He just gave another one of those awesome belly-laughs, and said, no, he had not seen any along the route, but patting his boep, he said luckily he’d smuggled a few into the race himself!