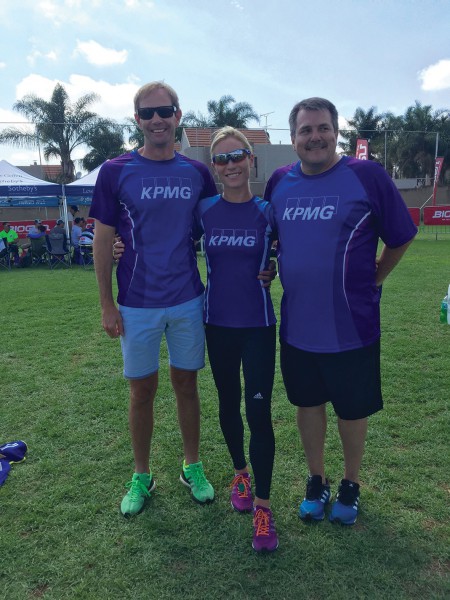 13 Aug 201617 May 2019 Modern AthleteColumns
Share
Tweet
0 Shares
In life we are taught to lead by example, and Dana Coetzee does just that. The current KPMG Running Club National Manager completed 20 Comrades Marathons, 15 Old Mutual Two Oceans Marathons and 25 RAC Tough One 32s, amongst many other races, and today he still pours the same passion into the sport as he did in his running heyday. – BY ROXANNE MARTIN
It all started way back in 1974 when Dana saw his technical drawing teacher, Koos Sutherland, take second place in the Comrades. Inspired by this, he decided, “This is what I want to do,” and began training with Koos in the Vaal area, even getting a training programme to follow. In 1976, aged 15, Dana entered his first race, the Vaal Marathon, and being the first time he had run that distance, he didn’t know what to expect… and neither did his father, who was seconding him.
“He drove alongside the route to support me, making sure I had all that I needed,” says Dana. “Later in the race I was completely dehydrated, and my dad, who had my little sister with him, took her sippy cup, filled it at the tap and gave it to me. I ran the rest of the race with that sippy cup!” Dana came home in a respectable 3:50:50 and received a race badge branded with Coca Cola, the sponsor of the race at that time – only those runners who finished in a sub-three hours received a medal. Not that this worried Dana: “I was very, very proud of that Badge,” he reflects, adding the hardest thing about the day was, “to realise what a 42km marathon is!” However, the running bug had bitten.
THINGS GET SERIOUS
Running shorter distance road races, Dana soon started mixing with the crème dela crème of South African running of that era – Bernard Rose, Johnny Halberstadt, Matthews Batswadi, Willy Farrell and Kevin Shaw – who inspired him just by being in the same race. “Yissie they could run a ten-miler in sub-50 minutes, while I struggled to get in under an hour,” says Dana, but that just made him train harder, and eventually he also got to that sub-50 time. However, his dream was the Comrades, and in 1980 he finally made it the start line. Having finished school in 1979, he started preparing for his first year of National Service, but as his call-up was only in June, there was time to do the race that had inspired him to start running.
For that 1980 Comrades Dana once again had his Dad as his second. “You were only allowed a second from Cato Ridge onwards if your second was on a bicycle. My dad had a big sticker with my race number that he put on a special zinc plate and tied to the front of his bike, and he had a crate filled with bananas and koeksisters, and a small portable radio so he could follow the race,” says Dana. “He stayed with me the whole way, but I would overtake him on the hills and he would overtake me on the downhills!” Dana finished in 8:17:00 and his first thought was, “Wow, I just finished Comrades,” but it wasn’t long after that race that he realise he wanted to do still better… that more than anything, he wanted a Comrades gold medal!
RACING FOR GOLD
Dana continued to get stronger and faster, and in 1982 he thought he was ready to push for a silver in his third Comrades, and he did it in style, cutting more than an hour off his 1980 time to finish in 7:13:05. He went even better in 1983, clocking 7:07:59, but it wasn’t enough, because Dana still had serious ambitions about claiming a gold medal for a top 10 finish. “I wanted to get serious about running,” says Dana, but in 1986 he didn’t finish Comrades for the first time since 1980 because of an overtraining injury. “I realised that I needed to train properly!” he says.
Bouncing back in 1987 he clocked 6:44:26, and in 1988 doing everything just right paid dividends as he posted his best time of 6:33:15 for 101st position. Even better, as he ran into the finishing stretch, he was handed a rose, and that made him feel like he had achieved his goal. “In that moment I knew how Bruce Fordyce felt, because everyone around me was screaming, cheering me on. I got my ‘gold’ in that moment,” says Dana, who eventually amassed an impressive 12 silver medals in his 20 Comrades runs, as well as seven sub-four hour silvers at Two Oceans, including an impressive best of 3:48:01. He last ran the big ultras in the early 2000s, but today he is still supporting the top runners through his work at KPMG, including Caroline W?stmann and Christine Kalmer, helping them to strive for gold.