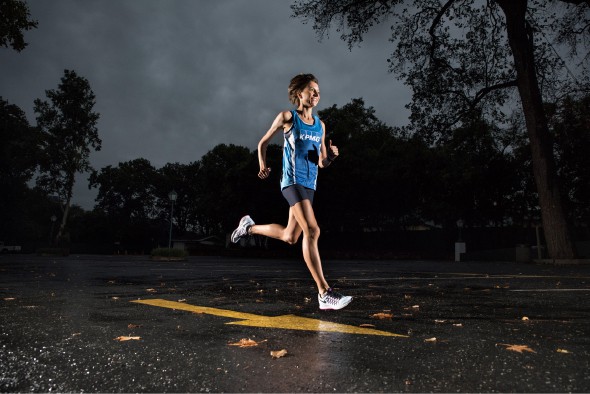 The KPMG running club has had much to celebrate in recent weeks, including the news of Christine Kalmer being selected for the Olympics and Kerry-Ann Marshall winning her first gold medal at the Comrades Marathon.

Christine to Fly the SA Flag

On 25 May, SA’s Olympic governing body, SASCOC, announced the first names of Team South Africa for the 2016 Olympic Games in Rio de Janeiro, and the Champagne corks popped as Team KPMG heard the news we had been waiting for, that our very own Christine Kalmer was selected as one of three to represent South Africa in the Women’s Marathon!

We asked Christine how she felt about being selected and even a few weeks later she was still trying to take it all in. “I don't think the fact that I have made the Olympic team has completely sunk in yet. After the 1992 Olympic Games, where Elana Meyer won the silver medal in the 10,000m, I knew that was something I would like to be part of. I was six years old at the time, and I have been dreaming about it for 24 years now, so having that dream become a reality is quite surreal.”

Understandably, training for the Olympics has been Christine’s focus since she qualified late last year in Valencia with a time of 2:33:43. “I am building up to the Olympics, and most important is to build my base right so I will peak on race day,” she says. She adds that training through the cold winter months in Johannesburg is a challenge, but she still won’t turn to the treadmill. “It’s too boring, you count every passing second, and have to look out in front of you all the time to make sure you don’t fall off! My sister Rene and I still get up at 5am to go out for our runs, and with the right gear the cold doesn’t really bother us… but it does make it more difficult to get out of bed!”

Travelling to the Olympics in a far-off country will mean leaving most of her support base back at home, but Christine will have her family with her in Rio, so she is far more relaxed about the trip. “I am very fortunate to have my support crew going with me, as Rene, my parents and my fiancé Aiden are all planning to make the trip to Rio as well. So I can’t wait for the Games in August!”

Kerry Reaching for the Stars

It seems that Kerry-Ann Marshall was running even before she started walking. “My mum used to say that I could run before I could crawl,” says Kerry, who grew up with running in her blood as the whole family went along with mom to all the races to second her dad. Her own athletic journey started early and at the age of seven she ran her first 8km race.

Her family’s love affair with running also led to Kerry’s passion for the Comrades Marathon. “As a little girl I would wake up early to watch the Comrades start, and I would be glued to the TV until the final gun. I remember seeing the top runners receive a rose as they entered the stadium, and since then I have dreamed of one day receiving a Comrades Rose, too,” she says. Well, this year her dream came true as she was presented with a rose as she took sixth position in the women’s race, having earned two silvers in 2014 and 2015.

Kerry says her love for running goes to the depths of who she is as a person. “Through running I feel like I have gained a richer understanding of life and who I am as a person. Running is my happy place, where I feel complete and where I can just be. I feel running and doing ultra’s like Comrades can translate into our lives as we overcome everyday challenges and realise that with the right mindset and commitment, anything is possible. In a race, negative thoughts rarely cross my mind – I like to leave all my doubts at the start line. However, if things start to go awry, rather than dwell on the problems, I usually adjust my expectations and focus on positive thoughts. I try to draw energy from the supporters, or chat to other runners and think about the hard work that got me to the start line in the first place.”

“I feel really fortunate to have been given the opportunity to live my dream, and I am blessed to have so many amazing people involved in the background, like coaches, physios, my husband, my family, training partners, KPMG, Salomon and friends. Without their love, support and guidance, I would never have gotten to this point.”