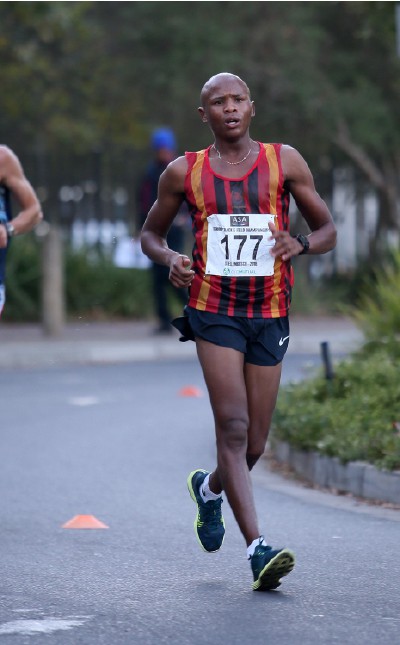 Kenyan race walker Samuel “Speedy” Gathimba caught everyone off guard this past weekend when he won the 20km race walk at the African Championships in Durban. Samuel conquered the course in an impressive time of 1:19:24.

Samuel was followed by Tunisian race walker Hassanine Sebei. Hassanine was closely followed by South African record holder Lebogang Shange and his fellow countryman Wayne Snyman. Samuel’s performance was world class and his winning time is the 8th fastest time of the season.

If Samuel had walked a time of 1:19:24 at the World Championships in Beijing last year, he would have won the silver medal. The two South African walkers described Samuel’s performance as outstanding.

“As a race walker, you are lucky if you are able to perform like this once a year.” said Wayne, who is sponsored by HPC.

According to Lebogang, he did not think Samuel would be able to keep up such a fast pace. However, when Samuel completed his first kilometre in 3 minutes and 15 seconds and continued walking at the same speed over the second kilometre, Lebogang soon realized that it would be a mistake to try to keep up with him.

Lebogang settled down and walked at a pace with which he was more comfortable.

“Hats off to Samuel. He fully deserved to win,” Lebogang said after the race.