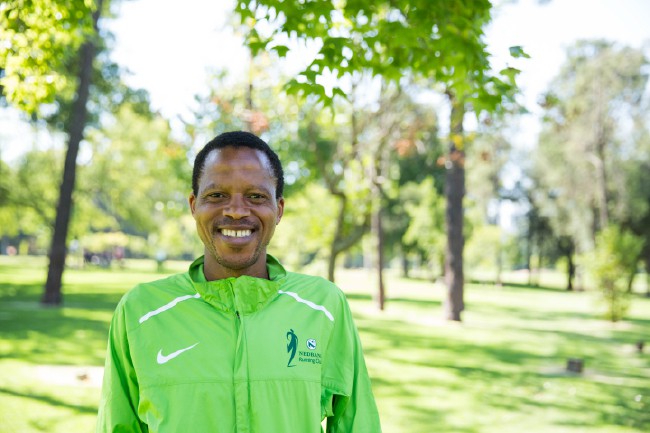 Hendrick Ramaala, a former Olympian athlete says that the honour of representing their country at the Olympic Games is the downfall of South African marathon athletes.

“Everything changed the day Josiah Thugwane won the gold medal in the marathon at the 1996 Olympic Games in Atlanta. His performance made us believe that we ‘owned’ the marathon and that because we are South African marathoners, anything can happen on any given day. We soon got a rude awakening,” said Ramaala.

Now, as the head coach at Nedbank Running Club. Two of his protégés, Sibusiso Nzima and Lungile Gongq, will represent South Africa in the marathon at the Olympic Games in Rio.

Since Josiah’s’ success, no South African marathon runner has ever been in contention to win the Olympic Marathon. To be brutally honest, the performances of the marathon runners have been rather disappointing. Ramaala’s 12th place finish in a time of 2:16:19 at the 2000 Olympic Games in Sydney was one of the better performances.

The question is. Why does an athlete like Hendrick Ramaala, who was able to win the New York Marathon in 2004 in a time of 2:09:28 as well as a best time of 2:06:55 in the 2006 London Marathon, never able to duplicate these performances at the Olympic Games level?

“It was certainly not for lack of trying. I really did everything I could to ensure that I would be at my best at the Games. What got to me, was the pressure of representing my country at what is certainly the most prestigious sports event in the world.

“When I competed in New York and London I was running for myself. But, when you compete at the Olympic Games you run to make your country proud. That was what got to me. Suddenly I was part of a team. I could not deal with all the expectations, especially because I never considered myself a good team player.

“I was not the only top South African marathon runner who battled to run a good race at the Olympic Games. Gert Thys finished in a time of 2:06:33 and Ian Syster in a closely contested time of 2:07:06 were also never at their best,” said the Nedbank Marathon Running coach.

“Another factor that plays a definite role in the Olympic Games is the weather. In most instances, the athletes run in hot and very humid conditions. This means that it is not the fastest runner who wins but the runner who runs the smartest.”

In view of what he has learned from the four Olympic Games in which he competed, Hendrick is quite realistic about what to expect from Sibusiso and Lungile.

“They are still novices when it comes to marathon running and it is the first time that they will be competing at the Olympic Games. My advice to them is not to go out there and expect to win. I just want both of them to run to the best of their abilities. Then whatever happens, happens. What will help them is the fact that there will be no real expectations for them to perform. Who knows, one of them might just be able to get a top ten finish. But as their coach I would be happy with a top twenty finish.”