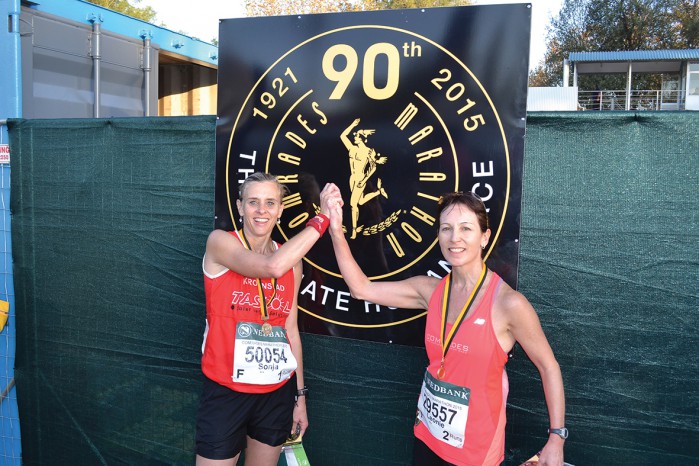 In running circles, it is considered a huge achievement to run a marathon on each of the seven continents and become a member of the Seven Continents Marathon Club. However, there is another, even more exclusive club, known as the Grand Slam Marathon Club, reserved for Seven Continents runners who add a marathon at the North Pole to their list, and earlier this year Sonja and Leoni gained membership when they ran their seventh continental marathon in Antarctica, followed shortly by the North Pole Marathon.

It all started when long-time friends and regular marathoners Leonie and Sonja began running together in 2012 and completed the Two Oceans and Comrades together. “After Comrades I wanted to run the City2City ultra, but when I was online looking for details, up popped the New York Marathon web site, and when I next saw Leonie, we decided to enter,” says Sonja. “We booked flights on Turkish Airlines, but that was the year the race was cancelled due to the hurricane, so we decided to change our flights to go run somewhere else.” So, early in 2013 they ran the Ocean View Marathon in New Jersey in the USA, and 10 days later, as part of the same trip, they ran the Dead Sea Marathon in Amman, Jordan, which meant they had run a marathon in North America and in Asia, to go with their numerous African marathons.

The following year they ran the Inca Trail Marathon in Peru and the Athens Marathon in Greece, thus adding South America and Europe to their list, and in 2015 they ran the Sydney Marathon in Australia. “Then earlier this year Leonie was due to go run the Antarctic Marathon on King George Island on 12 March as part of her 50th birthday celebrations, having put her name on the waiting list in 2012 already, but her original running partner for the trip had to withdraw, so I went with and together we finished the Seven Continents Challenge,” says Sonja.

Just after getting back, the two met for a coffee after church one Sunday and Leonie mentioned the North Pole Marathon, and within a few weeks the intrepid doctors were on their way to Norway, from where they caught a flight to one of the Russian research bases at the North Pole – after a delay because of a crack in the ice runway! “We would have run on 9 April, but on the seventh they found the crack and began constructing a new runway. The race was delayed to the 18th, so some people had to abandon and go home without running, but then on the 12th organiser Richard Donovan said we could go ahead, so the first group of runners flew out,” says Sonja. While we took a helicopter flight over the North Pole, the plane went back for the rest of the runners, but when it returned they spotted another crack, so they had to go back to Norway again.”

“Luckily, on the 16th we finally ran the race, which was really hard at times because running on the ice and snow felt like running on sand, and that meant we had finished the Grand Slam, although Richard is quite strict about the rules, and because the Antarctic race we did was on King George Island, not the actual continent, we have been given Associate Membership of the Grand Slam Club.

In June Sonja is going to run in Madagascar, while Leonie will be running the Iceland Marathon in August, and next year they will be doing the Boston Marathon together, with the Great Wall of China Marathon hopefully part of the same trip. “We try to do two marathons per trip, and we make every trip a real adventure, including not only sight-seeing, but also other fun activities,” says Sonja. “So, we mountain biked in Bolivia, visited the Moulin Rouge in Paris, dived the Great Barrier Reef in Australia, swam in the Dead Sea, went for a balloon ride in Turkey, and did white water rafting in the Grand Canyon in the USA, so these trips are not just about running. We’re both in our fifties and believe in stopping to smell the roses, so we don’t want to just fly in, run and fly out, but before the next trip in 2017, we first need to do some work and raise some more money, plus give our families some attention!”