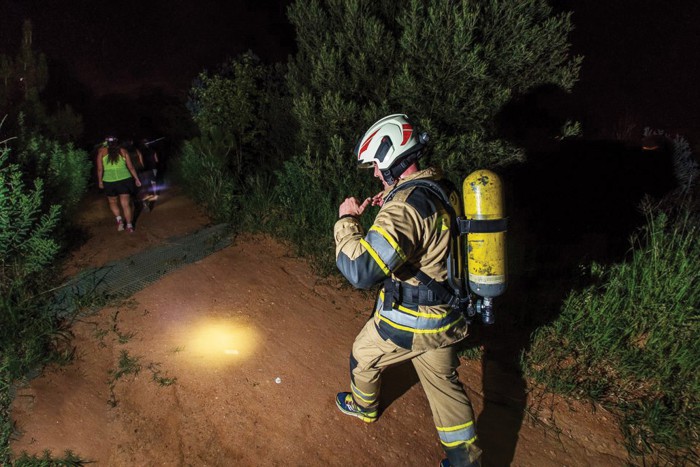 They’ve become a regular sight in 5km fun runs around Gauteng, a group of guys in firefighting kit and running shoes, and there’s an interesting story behind their unorthodox racing kit.

Running can be challenging enough, what with steep hills, fatiguing muscles, heavy breathing and sweat in the eyes, but imagine doing it in full firefighting gear. That’s what five intrepid firefighters in Johannesburg are doing on a regular basis in Gauteng races. Henco Swart, Scott Liebenberg, Marco van Vuuren, Gary Kaufmann and Dewald Meintjies don their bunker gear, including pants and jacket, helmet and air tank, then lace up their running shoes and head off to do 5km fun runs and parkruns, all to get fit both for firefighting duty and for firefighting competitions.

“We’ve been competing in the yearly Scott Safety Challenge Events since they started in 2010, and also in the SAESI Expo in Joburg every second year, and we compete in full gear, with five tasks to complete either as a team or individually,” says Henco. “We call it the toughest two minutes in sport, so this year we decided to run races in our bunker suits to maintain our fitness and acclimatise to running in the gear, because it adds 30 kilograms to your weight and takes some getting used to. We also have the Toughest Firefighter Alive, hosted in Cape Town, where the guys are extremely fit, and we would like to go down there to take the cup from them!”

The five guys are all involved in firefighting, although at different stations or areas. Gary is a firefighter at Lanseria airport, Dewald is a firefighter and fire rescue trainer at Pretoria North Fire station, Scott is a reservist at Lonehill, and both Henco and Marco volunteer where they can. The guys all met through regular get-togethers at the firefighting training centre, as well as monthly Burnout training and competition meets in Johannesburg. “Running forms part of the fitness training for firefighters, who must be able to run 2.4km in 12 minutes to be deemed fit to work, so all of us train and stay fit, but none of us are avid runners,” says Henco. “Dewald boxes, Marco plays rugby, Gary does PT at the station, and I do weight training and body building. We got into running because of the fire challenges, as it is a good way to build cardiovascular fitness.”

“Besides our own fitness and training, we are also inspired by Mark Basson’s Bunker Challenge. He is an EMT and volunteer rescue firefighter in KZN who wants to qualify for the highest paramedic level, but there are high costs to do so, so last year he did a series of events of up to 12 hours in full gear to raise funds for himself as well as for CHOC. We heard about him on the radio, then met him at the SAESI Expo, and our firefighting brotherhood meant we all instantly became friends.”

When asked what it is like to run in the gear, Henco says, “It’s hot as hell, and you perspire much more than in normal running gear. It also fatigues the body a whole lot faster, and there is a lot more strain on the body, from the neck all the way down, because the helmet weighs three kilograms. Then there is the SCBA, or self-contained breathing apparatus, our compressed air cylinder – with its whole rig it weighs another 13 kilograms.” The only firefighting equipment that the guys do not run in is their boots: “The boots make you do a bit of a duck-walk, and as anyone who has tried to run in gumboots will know, it is difficult to place your feet properly, it fatigues your feet, and it is heavy on the calves, strains the shins, and bad for the knees.”

“But the biggest thing about running in the suit is the mental game, because it makes 5km a lot tougher than normal, and we push to one more tree, or lamppost, until we see that finish line, but there is also the camaraderie. Running with my ‘brothers in fire’ and sharing this with them is a privilege and an honour, and our runs attract a lot of attention and create awareness, which is awe-inspiring.”