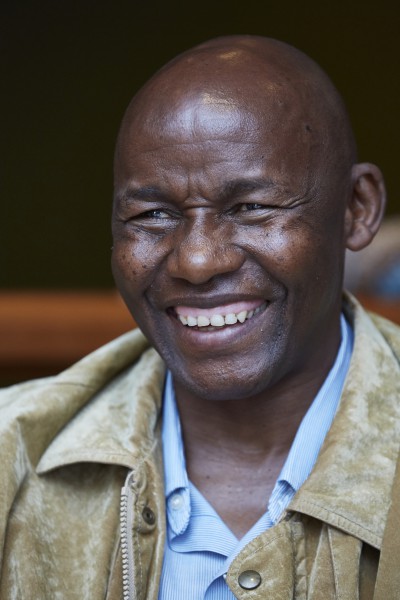 Thulani Sibisi lined up for the 1986 Two Oceans Marathon knowing he had to win the 56km ultra, or else he would have to pay back a lot of money… but he did win, and that opened many new doors for him. – BY SEAN FALCONER

Having finished 12th and 14 in the 1982 and 1983 Two Oceans Marathons, Thulani had actually decided by late 1985 to retire from competitive running, but after finishing second at the Peninsula Marathon in early 1986, he decided late to run Oceans again. The problem was, he didn’t have accommodation arranged in Cape Town, and was not keen on a long, cramped bus or train journey from Johannesburg just before the race, so he decided to ask his former employer, businessman Johan Rupert, for help.

“I called his office and told his secretary I needed money for an air ticket,” says Thulani. “Five minutes later she phoned back to say Johan said OK, but then I have to win, or else I must pay him back. I said OK, because I knew I could win it. Then she phoned to say the ticket was bought, first class, and I was booked into a hotel in Newlands as well, just one kilometre from the start and finish! So, I was well rested when I lined up for the race, and I knew I was going to have a good run. I pulled away from the leaders on Chapman’s Peak and got caught again in Hout Bay, but I knew I would get them on Constantia Nek. My tactics worked perfectly, and that win opened doors for me. I wouldn’t be what I am today if I had not won, because it made me a brand. Other guys achieved more race wins, but that one win brought me far more, because I think I utilised it better.”

Opportunity to Run
Born in 1953, Thulani grew up in rural Natal but left school early to go find work in Johannesburg, landing a job as gardener for Johan Rupert. “I told him I was a champion 10,000m runner at school, so he said I should train after work and show him what I can do,” says Thulani. “One day I told him I wanted to run a 21km in Soweto, and asked him for R1 – that was a lot of money back then! I finished fifth, and on the Monday he spoke to various people who put me in touch with Johnny Halberstadt. I went to see him at his running shop and he gave me new running shoes and a big bag of running clothes. I was now a sponsored athlete!”

By 1983 Thulani was working at the Frontrunner sport shop in Sandton and running for RAC, where he was looked after by mother-figure Vreni Welch, but the Apartheid laws made life very difficult. “I would get arrested at least once a month while training because of the Pass Law, so Vreni let me stay at her place, and that stopped most of the arrests.” However, one night Thulani and his girlfriend got dressed up for a club dinner, and while waiting for a bus, he was once again arrested. “I was wearing a suit, looking great, but I felt so humiliated.” Frustrated, Thulani decided to quit running, but then fellow RAC runner Bob De La Motte asked Mark Etheridge of the Star newspaper to write about Thulani. “After that there were no more arrests, and I was protected by the white runners like Bob and Johnny. I don’t think of them as friends, they are my brothers.”

Administrative Role
Thulani finished second in the 1987 Two Oceans, then eighth in 1989 and 12th in 1990, and then focused on the administrative side of the sport, serving on the RAC committee, then helping to found the new ASA national body and the Soweto Marathon. He also went to the 1992 Olympic Games in Barcelona as Team Manager of the South African long distance athletes, including eventual silver medallist in the 10,000m, Elana Meyer. “I am proud that I had the vision to organise for Elana to stay outside the Olympic Village, so that she could focus on her race, and that’s where athletics changed in this country, because nobody expected an Afrikaner woman to operate so well with a black manager. When people speak about our Rainbow Nation, it already existed in athletics since the mid-80s, when Bob and Vreni protected me, and I carried it forward.”

However, there was one more hill to climb… In 2012, Thulani was diagnosed with stage three prostate cancer, which he describes as “one of my worst experiences. I never expected it, since I had always led a healthy lifestyle with no drinking or smoking. Now I am working with the Prostate Cancer Foundation, teaching young people about the disease. Also, many people think cancer is just a white thing, so there is a lot of awareness to be created in black communities.”