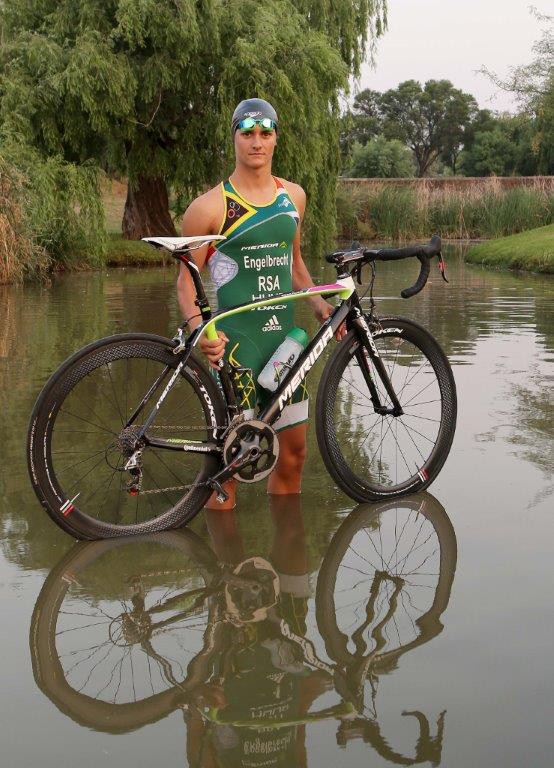 It is easy to set goals, but to achieve them can be a huge challenge.

This is why the 20-year-old Basson Engelbrecht (Tuks/HPC) has good reason to feel proud about what he has achieved this season as a triathlete.

“I set myself five goals and I have achieved four of them. If it had not been for the fact that I was bitten by a spider, it could have been five out of five. But I am not complaining. I have had my best year ever as a triathlete.”

Engelbrecht won the South African triathlon title. He is somewhat apologetic about his victory in East London, because Richard Murray (bronze medallist at the World Championships), as well as Henri Schoeman and Wian Sullwald were all absent. But Engelbrecht was the best of the competitors on the day and the title is his. According to an old saying, there is no ‘remarks’ column in sports.

He also finished third at the African Championships, won an African Cup event in Mauritius and participated in three World Series races.

The only goal he failed to accomplish was achieving a top-five finish in the under-23 race at the World Championships in Chicago, but that was not due to any fault of his.

The Tuks/HPC athlete was bitten by a spider while he was on a training run in Hungary. As luck would have it, the wound became septic after a few days and he was unable to train for quite a few weeks. This forced him to withdraw from the World Championships.

“The most important lesson I have learned this year was not to take anything for granted. I had a dream start to my season but it took one spider to get my season spiralling downwards at an alarming speed. I now realize how fragile the human body can be and why it is so important for a professional athlete to look after himself. Being an HPC athlete is a great help because it gives me immediate access to experts whenever I experience a crisis.”

Engelbrecht fully realizes that his best chance to represent South Africa at an Olympic Games will be in Tokyo in 2020, but this is not going to stop him from doing everything in his power in an effort to slip through the proverbial ‘backdoor’ for the 2016 Olympic Games in Rio.

“I am planning to race as often as I can during the early part of the season in an effort to improve my international ranking sufficiently to perhaps qualify. But I fully realize that it will be a challenge against all odds. A more realistic goal would be to podium in the under-23 race at the World Championships.

“I will also target one World Cup race for a possible victory.”

Lindsey Parry (Tuks/HPC), who coaches Engelbrecht, reckons he is capable of achieving both goals.

“What makes Basson such a good triathlete is the fact that he is a racer in the real sense of the word. Even if he is not in the best of forms he has the race savvy to make sure he is at the right place at the right time. This means that he is always a contender.”